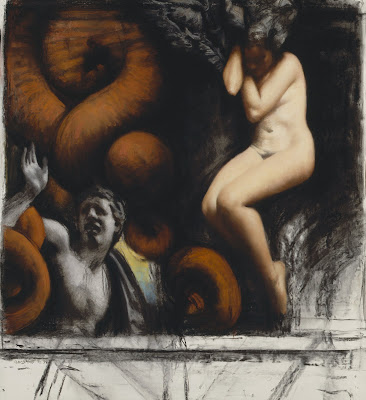 “While art is not always an emotional enterprise, it is absolutely consumed with life and death matters for [Sidney] Goodman,” writes Mark Rosenthal in the catalogue to Sidney Goodman: Man in the Mirror, “as if he, upon a time, dedicated himself to the dangerous mantra of Eros-Thanatos.” In the exhibition of the same name at the Pennsylvania Academy of the Fine Arts, Goodman’s life and death obsession comes across in 60 drawings and watercolors in mostly black and white with the occasional touch of stunning color. Perhaps no other work encapsulates the Eros-Thanatos theme as neatly as Night Vision (above, from 1992-1994), which pairs figures of love and death on the page as closely as in life. As curator Julien Robson points out in his essay, Night Vision and other works display Goodman’s exploration of the theme of the classical sculpture of Laocoön and His Sons, in which serpents sent by the gods strangle a priest and his sons for sniffing out the ruse of the Trojan Horse. “Illuminated in the flash of the artist’s imagination,” Robson continues, “the combination of material drawn from observation and memory is synthesized into a form that has a dream-like discontinuity that co-mingles the real with the imaginary.” A teacher at the PAFA since 1979, Goodman teaches us art history with a twist by throwing the classical, baroque, symbolist, and figurative traditions, along with many others, into the blender of his vision. Looking at Night Vision, you recognize Fuseli, Blake, Goya, and others, but you never lose sight of Goodman. 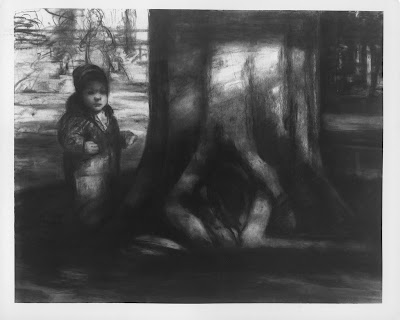 Robson believes that Goodman’s move from the suburbs to Philadelphia is a key to his art. “In this transition the task of expressing the tensions of a listless existence gave way to a vital engagement with the passions and a reinvigorated investigation of the self,” Robson writes. Reversing white flight, Goodman hurled himself and his family into urban existence red in tooth and claw rather than wallow in the enervating safety of the ‘burbs. Child Near Source (above, from 1987-1988) originates from a photograph of one of Goodman’s children standing beside a tree in Rittenhouse Square in Center City Philadelphia. The expression on the child’s face as he looks back at his father or mother captures just how alien nature feels to him—a stand-in for the modern disconnect from life’s sources. The vulva-esque opening at the base of the tree stump adds a sexual dimension, as if the child wishes to return to the womb but wants to know how. Goodman makes use of candid photographs of his wife and children in many of the works in the exhibition not as sentimental fodder but as a springboard to deeper messages. “Goodman’s wit… unearths a residue of ambiguity that transforms these pictures from simply being meditations on domestic bliss into visually puzzling studies of familial relationships,” Robson remarks. 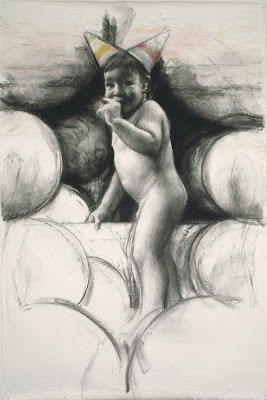 Sidney Goodman. The Birthday, 1988. Pastel and charcoal on paper. 90 x 61 inches. Collection of the artist.

In The Birthday (above, from 1988), Goodman poses his son as a devilish child, complete with horns thanks to a pair of birthday hats, cavorting in his “birthday suit.” Even in such childish themes Goodman manages to mix the everyday with both sex and danger. For Goodman, violence is childish and even cartoonish. In Mickey Watches, a leering Mickey Mouse witnesses the brutal beating of a man. A small drawing of The Three Stooges helps the viewer draw the conclusion that violence is both grotesque and comic in the baroque sensibility. It is in many of these depictions of violence that Goodman employs sparing yet stunning use of color. “So thoroughly is his work an art of black and white, especially in drawing,” Rosenthal writes of Goodman, “that it explodes when pastel suddenly appears.” Flashes of red representing bloodshed flame out from the image and burn into your memory with their selectiveness more than any painted bloodbath possibly could. I walked through the exhibit right after viewing Elizabeth Osborne: The Color of Light, another PAFA exhibition (my review here) running at the same time just downstairs from the Goodman show. Both teachers at the PAFA and both great artists in the figurative tradition, Goodman and Osborne demonstrate the entire gamut of emotions that color, either liberally flowing or selectively dripped out, can achieve. Each exhibition is moving by itself, but the combined effect will quite literally knock you off your feet. 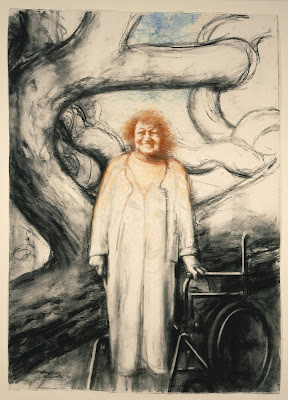 Goodman excels at manipulating imagery and motifs for different effects. In Night Vision, the Laocoön reference calls upon ideas of Eros and Thanatos. In The Artist’s Mother II (above, from 1994), the Laocoön tendrils reach out again as harbingers of death, but the passionate violence of eros gives way to the tenderness of agape as the tendrils extend to embrace rather than strangle the artist’s mother, who was dying at the time. The tree limbs serpentine around the elderly woman’s body as if accepting it back into nature, returning her to the mysterious source that mystified Goodman’s son in Child Near Source. Goodman draws his mother with the frizzy hair and chubby features of reality leaning against the wheelchair that became her final means of conveyance and conveys her as stunningly beautiful and alive at the very moment she is dying. As with the drawings and paintings of his children and wife, Goodman rejects the conventional definitions of beauty and redefines them as reality viewed intensely and imaginatively. His wife Pam shown sleeping or combing a child’s hair is not a fantasy woman but a real woman with all the flaws and perfections real women claim as their true charms. 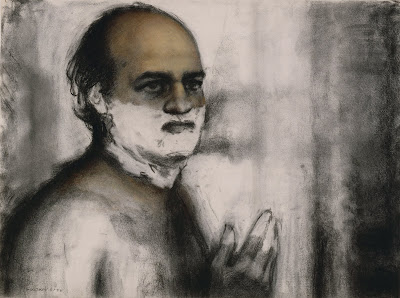 Goodman also repeatedly turns his eye to himself. A series of works showing the artist shaving called Man in the Mirror (one above, from 1987-1988) jokingly presents the mundane reality Goodman faces each morning. The receding hairline and broadening features that come with age are an honest man honestly looking at who and what he is. I think of Thomas Eakins’ warts-and-all 1902 Self-Portrait as a precursor of Goodman’s self-portraits, and I’m sure Goodman is aware of Eakins, too. Funny enough, Eakins’ portrait shows the signs of a poorly performed shave, but Goodman’s works all demonstrate his gift with the blade. Goodman cuts close to the skin in his art and shows us what lurks beneath while spilling as little blood as necessary. In this black and white hall of mirrors, such dabs of blood always remind us of the human passions flowing beneath.


[Many thanks to the Pennsylvania Academy of the Fine Arts for providing me with a review copy of the catalogue to Sidney Goodman: Man in the Mirror and for the images from the exhibition.]