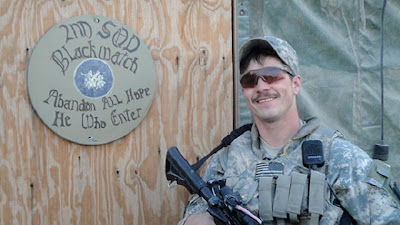 "Lasciate ogne speranza, voi ch'intrate," Dante Alighieri wrote on the entrance to Hell in the Inferno section of his allegorical masterpiece The Divine Comedy. The English translation usually goes something like “Abandon all hope, ye who enter here.” When the soldiers featured in the gruesomely repugnant story “The Kill Team” in a recent issue of Rolling Stone settled on a motto to place on the entrance to their quarters, they mangled Dante’s words into “Abandon all hope he who enter” (shown above). “The Kill Team” not only killed innocent Afghan people for sport, thus mangling the honor of our military, but documented their actions in photographs that celebrate the murders. Looking at these photographs (which are not for the faint of heart) and facing the prospect of a third theater of war in Libya, it’s hard not to abandon hope for our military and our proposed mission to bring peace to the world. Please come over to Picture This at Big Think to read more of "Abandon All Hope."

Members Only: Relics of the Age of Relics and Reliquaries 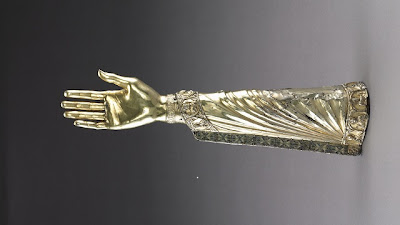 Those of us who lived through the 1980s remember well the phenomenon of the Members Only jacket. Whether you’ve found one in the back of your closet or not, you can’t help but look back and wonder what we “members” were thinking. A similar phenomenon surrounds the modern perception of the medieval cult of relics and the precious reliquaries that once housed them. In the exhibition Treasures of Heaven: Saints, Relics and Devotion in Medieval Europe, currently at the Walters Art Museum through May 15, 2011, modern pilgrims can see that the cult venerated not just members (such as the arm bones once inside the arm-shaped reliquary shown), but any souvenir of the sacred from items related to the life of Christ to even stones or water taken from the Holy Land. Gaining an appreciation of the allure of such objects opens a window onto a medieval world at once very different than our own and yet somehow a precursor of our own cults and memberships. Please come over to at Picture This at Big Think to read more of "Members Only."

[Many thanks to the Walters Art Museum for the image above and to Yale University Press for providing me with a review copy of the catalog to the exhibition Treasures of Heaven: Saints, Relics and Devotion in Medieval Europe, which runs at the Walters Art Museum through May 15, 2011.]
Posted by Bob at 5:55 PM 2 comments: 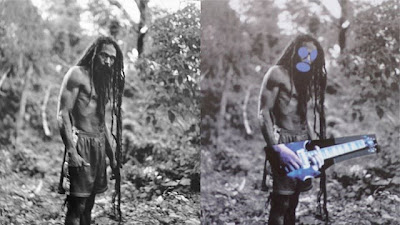 “Immature poets imitate; mature poets steal; bad poets deface what they take, and good poets make it into something better, or at least something different,” wrote T.S. Eliot in a 1920 essay titled "Philip Massinger." I’m not sure where artist Richard Prince would fall on the Eliot scale, but according to Manhattan federal court judge Deborah Batts, he’s legally a thief. Judge Batts ordered Prince and the Gagosian Gallery to destroy millions of dollars of artwork as part of the judgment in favor of photographer Patrick Cariou, who claimed that Prince’s appropriation of his photography crossed the line of fair use into the dark underworld of intellectual theft. Appropriation in art has been all the rage in modern art for decades, and not just by Prince, but this decision calls into question the legality (and thus the practicality) of appropriating the art of others into your own. Is Eliot still right to say that stealing is a sign of “maturity”? Or is this “modern maturity” a crime gone unpunished, until now? Please come over to Picture This at Big Think to read more of "Modern Maturity."

[Many thanks to Hugh for drawing this story to my attention.]
Posted by Bob at 9:00 AM No comments: 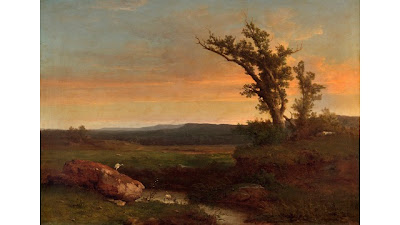 When Michael Quick searched high and low in 2007 for paintings by 19th century American master George Inness to include in what would be his award-winning catalogue raisonne of Inness’ work, he came to the Philadelphia Museum of Art to see Twilight on the Campagna. The 1851 painting had entered the collection in 1945 and hadn’t been exhibited since 1952. An example of Inness’ earliest work in excellent condition, Twilight on the Campagna was one of those hidden treasures languishing in the darkness for want of wall space, because of critical blind spots, or both. The PMA recognized the treasure in their basement and conserved this masterpiece, which is now the centerpiece of their exhibition George Inness in Italy, which runs through May 15, 2011. Ironically, Inness’ Twilight began with his own treasure hunting, specifically a sojourn to Italy in search of artistry of the past he could take and transform into a new type of painting for the future. Please come over to Picture This at Big Think to read more of "Treasure Hunters."

[Many thanks to the Philadelphia Museum of Art for providing me with the image above and a review copy of the catalog to the exhibition George Inness in Italy, which runs through May 15, 2011.]