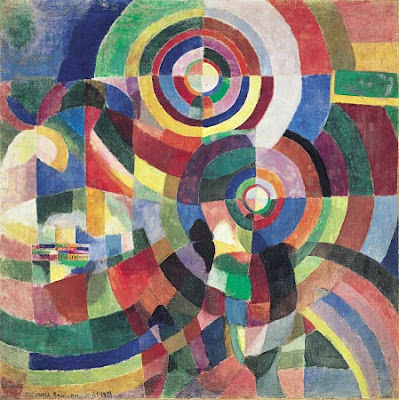 “He who knows how to appreciate color relationships, the influence of one color on another, their contrasts and dissonances, is promised an infinitely diverse imagery,” Sonia Terk Delaunay once said. Born November 14, 1885, Sonia Delaunay and her husband Robert created some of the most powerful images of the Orphic school, such as her Electric Prisms (above, from 1914). Electric Prisms takes full advantage of Sonia’s incredible grasp of color relationships, playing the different tones off of one another, with all the subtle concordances and dissonances, as if she were playing on a musical instrument one of the compositions of her musical contemporaries Les Six. 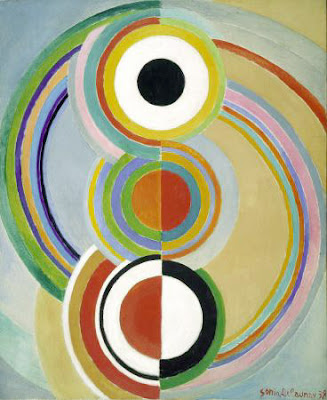 Sonia and Robert followed the mystic lead of the Czech painter Frantisek Kupka, whose spirituality energized the earliest Orphic works. In many ways, Orphism stands at the intersection where turn of the century spiritualism, new color theories, and new musical innovations such as jazz all collide. Sonia’s Rhythm (above, from 1938) explicitly calls to mind this musical side of Orphism, where colors are meant to wash over the viewer like a symphony, appealing to the soul and the senses more than the rational mind. During their lifetime together, from their marriage in 1910 to Robert’s death in 1941, Sonia assumed a secondary role, allowing Robert’s art to take center stage. After his death, however, Sonia assumed her rightful place. 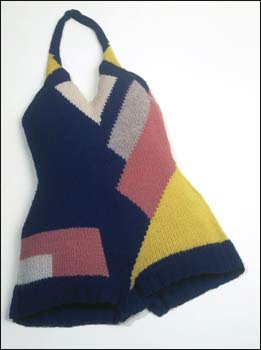 In 1964, the Louvre staged a retrospective exhibition of Sonia’s work, making her the first living woman artist so honored. In 1975, she became an officer of the French Legion of Honor. These accolades come not only in response to Sonia’s painting, but also for her work in theater design and fashion. Sonia’s startlingly designed (and startlingly uncomfortable) knitted wool swimsuit (above, from 1928) helped usher in a new age of fashion in the twentieth century linked to the latest art movements. With such designs, Sonia helped blur the line between fine art and fashion for future designers. By raising the previously disregarded area of textiles to the level of fine arts, Sonia paved the way for future artists such as Judy Chicago to create The Dinner Party, which incorporates all the supposedly lower, feminine arts in an epic work of grand art and feminism. Fittingly, Judy Chicago left a place at the table (albeit as one of the floor tiles) for Sonia Delaunay, one of the grand dames of modernism.

I really like your blog, may I add you to my blog roll?

You may certainly add me to your blog roll, if you like. I'd be honored.

Thanks for reading and for all your comments.