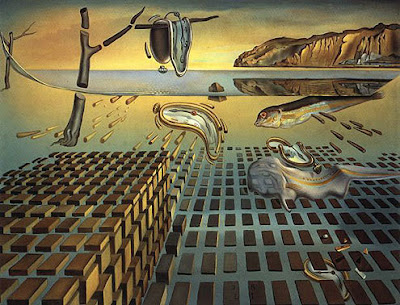 “I’m in a constant interrogation,” Salvador Dali told an interviewer in 1965. “Where does the deep and philosophically valid Dali begin, and where does the looney and preposterous Dali end?” I remember asking myself the same question while walking through the PMA’s Dali exhibition in 2005. Full of memories of my favorite painting by Dali, 1931’s The Persistence of Memory, I stopped short in front of a painting I had never seen before—The Disintegration of the Persistence of Memory (above, from 1952-1954). What was this all about, this revisiting 20 years later of one of his signature Surrealist pieces? Was this deep philosophy or shallow showmanship? Could it be both? In The Dali Renaissance: New Perspectives on His Life and Art after 1940, edited by the PMA’s own Michael Taylor, those questions and many more are raised and, if not answered, deeply and respectfully pondered in papers originally presented at a symposium held during the 2005 Dali show focusing on the post-Surrealist Dali so visible and so degraded and, perhaps, so misunderstood in relation to the Dali of melting clocks, boiled beans, and crawling ants. Taylor and colleagues help untangle the convoluted web of Dali-esque “logic” after 1940 that wove together old-time religion with new-age nuclear power as part of a larger mission to save not only painting (with the help of Leonardo da Vinci, no less) but the world itself, with such unlikely helpers as Franco, Mao, and Marilyn Monroe. 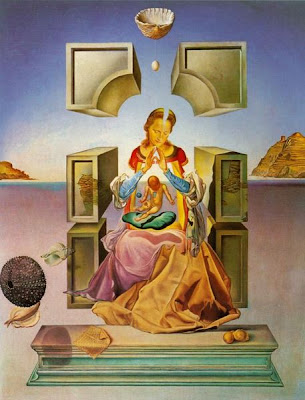 Reading through the excellent papers of this collection is like listening to a baroque fugue —familiar themes arise again and again, fall into the blender of artistic logic, and emerge as a whole new form of reality. In that sense, they approximate the mind of the maestro itself. Taylor neatly encapsulates this wild abandon with his title “The Dali Renaissance.” Taylor places at the center of these discussions “the idea of rebirth and regeneration that became a recurrent theme in [Dali’s] writings, paintings, and performances after the outbreak of World War II, which had forced him to flee Europe for the safety of the United States.” When the United States inaugurated the atomic age by using atomic bombs against Japan, reality itself disintegrated. Whereas many, including Dali’s former Surrealist cohorts, turned away from a nuclear-age future, Dali rushed headlong to embrace it, combining it with his newfound turn to Christianity and coining the phrase “nuclear mysticism.” In works such as The Madonna of Port Lligat (above, from 1949), Dali demonstrated the “artistic possibilities of nuclear physics” that Taylor recounts in his essay on Dali’s 1952 Nuclear Mysticism Lecture Tour. “Instead of the disintegration of matter, we have the integration, the reconstitution of the real and glorious body of the Virgin in the heavens.” In “Holy Toledo! Saint John of the Cross, Paranoiac-Critical Mysticism, and the Life and Works of Saint Dali,” Jonathan Wallis analyzes the growing identification by Dali with the mystic Saint John of the Cross, culminating in Dali’s 1960 claim to be the saint reincarnated. Whereas Henry Adams famously contrasted the power of the Virgin Mary versus that of the dynamo, following the line of dualist Cartesian reasoning of mainstream Western civilization, Dali takes those two poles—god and science—and forces them together, jolting his art into a whole new realm of possibility. The result is, of course, shocking. 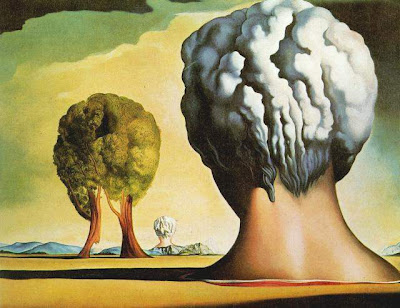 Perhaps the finest efforts to rehabilitate Dali’s post-Surrealist reputation come in those passages that take his dizzying logic seriously (or as seriously as Dali himself would allow). “My father today is Dr. Heisenberg,” Dali announced in 1958. “It is with pi-mesons and the most gelatinous and indeterminate neutrinos that I want to paint the beauty of the angels and of reality.” In “How Dali Learned to Stop Worrying about Surrealism and Love the Bomb,” Gavin Parkinson demonstrates how all the Surrealists avidly followed the interwar advances in physics of Albert Einstein, Werner Heisenberg, and Louis de Broglie. After Hiroshima and Nagasaki, however, only Dali maintains his “nuclearphilia” and a “mood of curiosity, excitement, and optimism.” The Three Sphinxes of Bikini (above, from 1947) celebrate rather than condemn the nuclear testing conducted by the United States on the Bikini Atoll. While Dali reacts positively and, more importantly, quickly to the nuclear age, the Surrealists hesitate, stunned by events, and react negatively and slowly. Again, the speed of Dali’s mind to forge these associations, however tenuous and questionable, simply confounded contemporaries as well as us today. Dali freely threw around terms like “pi-mesons” and “neutrinos,” but his familiarity with those terms proves that he read widely, if not deeply, and engaged the issue when others would or could not. 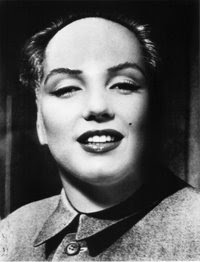 Where Dali’s memory may never be rehabilitated is in the field of his fascination with dictators, dating all the way back to 1939’s The Enigma of Hitler up to his frequent meetings with Franco from 1956 through 1975. Elliott H. King’s “Little Black Dress, Little Red Boo: Dali, Mao, and Monarchy (with Special Attention to Trajan’s Glorious Testicles” takes on the hairy (and hair raising) Dali-esque approach to Maoism. (By the way, academic symposia often lead to unofficial contests to see who can write the most outrageous title. King wins.) In his Mao Marilyn (above, from 1967), Dali conflates the utopian dreams of Mao’s Cultural Revolution with the “realism” of Warholian Pop art’s celebration of American popular culture and icons such as Marilyn Monroe, which Dali saw as emulating God’s divine realism in the initial moment of creation. Trajan (and his testicles) drop into the mix as the beginning of “historical naturalism,” specifically through Trajan's Column. If you have a headache reading all that, you’re not alone. In Dali’s defense, the full extent of Mao’s atrocities was unknown until 1976. However, Dali fell hard for dictatorships, which he saw as the modern equivalent of monarchy, which Dali saw as the hope of a new world order. “Twenty death sentences are surely more economical than a civil war,” Dali once said in defense of Franco’s tactics, conjuring a chilling calculus in the name of a greater good. 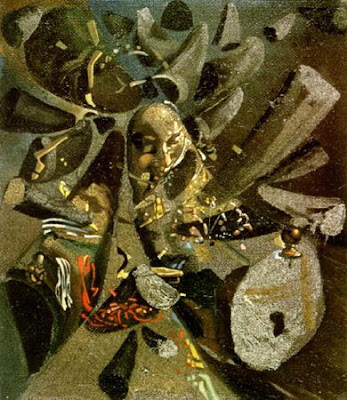 Dali’s nostalgia for the days of kings parallels his medievalist mysticism as well as his call for a return to Old Master technique in painting. Using da Vinci as his example, Dali saw modern painting as a failure and, as David Lomas writes in “’Painting is dead—long live painting!’ Notes on Dali and Leonardo,” “tried to fill the resultant vacuum by a renewed emphasis on traditional painting skills.” In The Paranoiac-Critical Study of Vermeer's “Lacemaker” (above, from 1954-1955), Dali reimagines Vermeer’s Lacemaker as a series of rhinoceros horns, a reimagining actually captured step-by-step in an unfinished film that King describes in another essay. During this period, Dali often presented works in progress, hoping to convey a sense of the effort behind such works. Dali, however, didn’t separate himself wholly from modern art, noting artists such as Yves Klein and Willem de Kooning for their approaches. As Taylor remarks in his opening essay, Warhol himself learned self-promotion at the feet of the master while Dali lived in New York City. In such passages, as well as in the closing interview with Amanda Lear and Ultra Violet, two of Dali’s assistants, Dali comes across as simultaneously more involved and less capitalistic in his later years. “Gala was Avida Dollars,” Ultra Violet says, linking Dali’s wife and Andre Breton’s caustic jibe at Dali’s commercialism. “It was not Dali… Gala is responsible for Dali’s success, and his failure…” In such comments lie the seeds of a whole new evaluation of Dali, the man, the artist, and the media phenomenon.

Despite originating as an academic symposium, the essays in The Dali Renaissance are thoroughly accessible and enjoyable, but require some work by the reader to appreciate fully the artist and his work. Tackling the maddening twists of Dali’s logic is no small task, and they follow along with a minimum of academic jargon. The authors write with a sense of respect for late Dali, who sorely needs some, but also with the maestro’s sense of fun. In The Dali Renaissance, we peer into the mind of the post-war Dali and find a vast network of beliefs that go far beyond dollar signs.

[Many thanks to Yale University Press for providing me with a copy of The Dali Renaissance: New Perspectives on His Life and Art after 1940.]
Posted by Bob at 6:31 PM