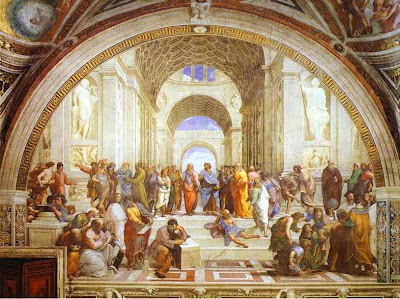 One of the highlights of the Vatican Museums for me was seeing Raphael’s The School of Athens (above, from 1509). Born April 6, 1483, Raphael borrowed the likenesses of many of his contemporaries to portray the philosophers, including Michelangelo as Heraclitus and Leonardo da Vinci as Plato. The only two figures that look directly at the viewer are Raphael himself as Apelles (at the right edge) and Francesco Maria della Rovere (or, possibly, Raphael’s mistress) as Hypatia (standing on the left). The School of Athens is more like a class picture of the School of the High Renaissance. I remember standing there and trying to remember who was who. I love how it neatly organizes the world of philosophy, with Plato pointing up to represent metaphysical philosophy and Aristotle gesturing downwards to represent earth-based philosophy. Raphael’s art also stands astride a dichotomy of higher and lower, heart and head, that makes him one of the truly pivotal figures of art history. 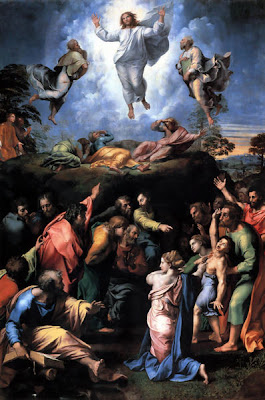 When the Pre-Raphaelite Brotherhood took aim at Raphael as the beginning of the overintellectualization of painting, they aimed poorly. In works such as Raphael’s Transfiguration (above, from 1520, left unfinished at his death), we see both the rigorous organization of Renaissance thinking and the deep spirituality more commonly associated with the “unthinking” Medieval age. Nietzsche saw Raphael’s Transfiguration as embodying both the rational Apollonian and irrational Dionysian types of art. Standing before the Transfiguration in the Vatican museum, I felt greatly moved. The amazing contrast of light at the top of the painting rising above the darkness below truly makes you feel that episode of the New Testament where Jesus takes on a wholly new state of being. To drop Raphael neatly into one category or the other is to lose the magic of his ability to combine both in his art. Descartes’ “Cogito, ergo sum” followed nearly a century after Raphael’s short life ended, but Raphael remains one of the main artistic victims of the Cartesian mind-body duality accepted by Western Civilization even today. 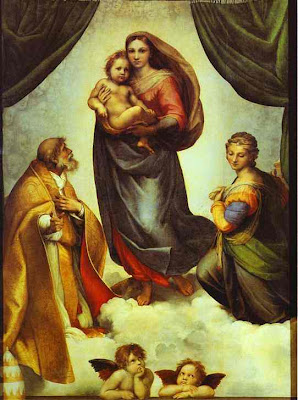 One of the more frustrating uses of great art, for me, is the endless proliferation of the two cherubs at the bottom of the Sistine Madonna (above, from 1513-1514). Most people don’t even know that those cherubs, the subject of countless posters and greeting cards, are actually just a small part of a much larger painting. They’re actually just stock add ons painted in to act as heavenly witnesses to the scene going on above them. Perhaps it’s a sign of Raphael’s genius that such a fragment can still have a hold on popular culture looking for emblems of innocence. Or, perhaps, it’s just another sign that we only see fragments of Old Masters such as Raphael, who are always more complex, more interesting, and infinitely more relevant than we realize.