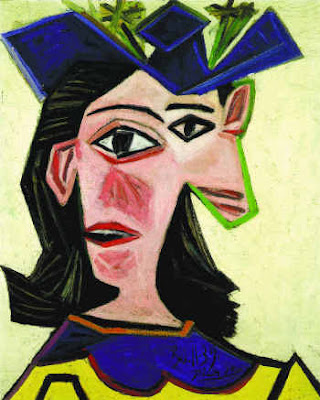 “I would like to produce portraits that a hundred years from now will seem to people like apparitions,” Van Gogh once said. In The Mirror and the Mask: Portraiture in the Age of Picasso, an exhibit at the Kimmell Art Museum in Fort Worth, Texas, we see the many “ghosts” of modern portraiture: the spectral face in the mirror, the wisp of spirit glimmering in a subject’s eye, or the magically transformed identity behind a mask–always with Pablo Picasso at the heart of those dreams, and nightmares. Picasso’s Bust of a Woman with a Hat (Dora) (above) shows just one of the many alternatives to the classic portrait found in the exhibit.

The introduction to the catalogue marvels at “the survival and transformation of portraiture” in modern art through a breaking “of the traditional contract between artist and sitter,” resulting in an exploration of identities of not only the sitter and the artist himself, but also of the society around them. Paloma Alarco, Curator of Modern Painting at the Museo Thyssen-Bornemisza in Madrid, Spain, and Malcolm Warner, Senior Curator at the Kimbell Art Museum, have gathered together a collection of the greatest portraits of modern art and present a panoramic view of the development of portraiture from Cezanne to today.

Francisco Calvo Serraller surveys the development of the portrait from the time of the Greeks in the catalogue’s opening essay, “The Spirit Behind the Mask.” Serraller sees the “secularization of the portrait” as a democratizing force that focused “its expressiveness as a vehicle for the fleeting and instantaneous” rather than celebrating the rich and the powerful. “[H]ow can we deny that our own age has been the golden age of the portrait?” he asks, arguing that “the genre of portraiture [is] the principle democratizing agent of art.” Alas, this democratizing power also becomes portraiture’s main weakness—a “triumph-failure” in Serraller’s view. “The portrait has died of its own success,” he laments, pointing to the abundance of imagery assaulting the modern consciousness—the blessing of expressive freedom, but also its curse. 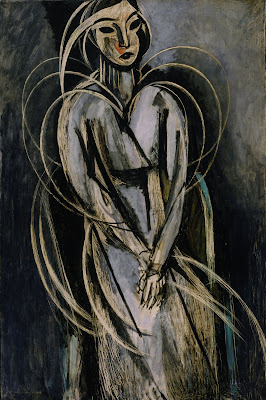 “Portraits About Portraiture,” Malcolm Warner’s essay, examines the self-referential nature of the modern portrait. Modern painting is always painting about painting in some sense, so portraits, especially self-portraits, are often portraits about portraits. Portraiture, “the most subvertible of the genres,” in Warner’s eyes, allows the greatest freedom to explore the larger questions or representation and self. Warner points towards Picasso as “the modern artist who played most provocatively with identity.” Looking back towards the precedents of Rembrandt and Velazquez, Picasso assumes many personas, painting himself and others in various guises, questioning the nature of identity and self as actual or merely constructed. In addition to these transformative “masks,” Picasso and others, such as Lucian Freud, paint self-portraits clearly made with mirrors (Freud even places his mirrors on the floor), to raise the consciousness of the viewer as to the artificiality of the image, which is simply a reproduction of a reproduction rather than the thing itself, is such a thing truly exists. In works such as Henri Matisse’s Mlle Yvonne Landsberg (above), the mask and other unconventional techniques combine to subvert the presence of the sitter and elevate the style and vision of the artist. Matisse clearly sets out to say more about himself and his approach to the portrait than about the young lady portrayed. The days of the importance of the sitter give way to the primacy of painting and thinking about painting. 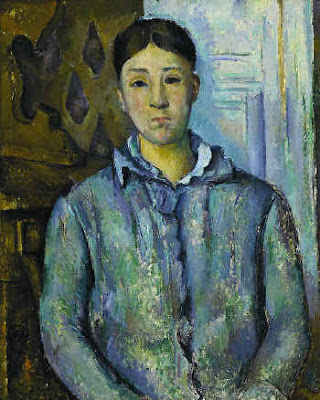 Picasso’s mask-like portrayal of Gertrude Stein in her famous portrait is only one of the alternative identities identified in John Klein’s essay, “The Mask as Image and Strategy.” In Stein’s portrait, the mask serves as “an intercessor,” “protecting [Picasso] from obligation to Stein’s features and forceful personality” and freeing him to complete his painting. Similarly, the mask-like face of Paul Cezanne’s wife in Madame Cezanne in Blue (above) renders her nonexistent as a person and allows Cezanne to approach the portrait the same way he would a still life or a mountain. (In fact, paintings by Cezanne hanging in Stein’s apartment may have inspired Picasso to use a mask for Stein. “Cezanne!” Picasso later said. “He was like a father to all of us.”) Other strategies that “find alternative languages of visual representation” include the use of the “otherness” of masks from exotic cultures, which can conceal but also reveal the elusive “inner” or “true” self. The use of masks by artists such as Amadeo Modigliani, who saw the mask as “more a starting point than a conclusion,” and Andy Warhol, who became an “astute observer of the surface” to turn real faces into masks in his “emphasis on the superficial,” are also explored. 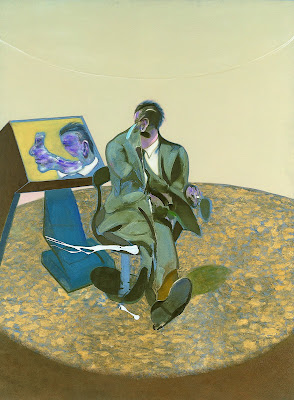 
Warhol also takes pride of place in William Feaver’s essay “’A Name, a Wretched Picture, & Worse Bust’: From Picasso’s Stalin to Warhol’s Mao.” Between the two artists’ portrayals of the two tyrannical leaders, Feaver inserts the history of the celebrity or glamour portrait in modern art. He sees Picasso’s portrait of Stalin as part of the artist’s strategy of “liberati[ng]… fact from appearance and… tweaking… recognizability.” Later tweaking includes Francis Bacon’s “invest[ing] portraiture with urgency… the moment someone flinches or whinnies and the mirror reveals the vulnerability of the bared neck,” such as in Bacon’s Portrait of George Dyer (above). Bacon takes the failed snapshot and succeeds in create a non-portrait portrait head of all blurred surface, freed of detail. “[T]hroughout the twentieth century,” Feaver writes, “every generation had its own particularly brand of new realism. In portraiture especially, realism denotes more than fact.” For example, David Hockney’s portraits “range from the confessional to near-hero-worship,” including several featuring imaginary encounters with Picasso himself. But it is Warhol who culminates the movement begun by Picasso in his portraits of figures such as Mao Zedong. “Star treatment in Warhol usage was deadpan,” Feaver concludes. “The image had to be so processed that nothing much remained, beyond the Warhol look, but head and shoulders and stare.” In the final analysis, there is only the artist and the image he creates, regardless of who that image may claim to depict.


Paloma Alarco breaks down each of the thematic groupings of the exhibit in her chaptered exhibition notes. Starting with the revival of Romantic individualism and the artist as visionary hero, Alarco presents Picasso’s forerunners—Cezanne, Van Gogh, and Paul Gauguin—as the first modern innovators of the portrait. Egon Schiele and Oskar Kokoschka then emerge as the major practitioners of the portrait as gesture, especially in their enigmatic use of hands and facial expressions to convey emotion and character. “Modern Color” in the portrait begins with Van Gogh and spreads to the Fauvists Matisse and Maurice Vlaminck and later the German Expressionists Ernst Ludwig Kirchner and Alexej von Jawlensky. In “The Mirror Broken,” Alarco traces how “painting became a complex puzzle to be solved in the viewer’s gaze” in the Analytic Cubist works of Picasso and Juan Gris as well as the Italian Futurist works of Gino Severini. The calm of the years between the wars appears in “A Portrait of Society,” where even Picasso returns to a more realistic, apparently calmer style as in works such as Portrait of the Artist's Wife (Olga) (above), “albeit without renouncing the practices of modernism.” The German Neue Sachlichkeit movement epitomizes this realist turn, often tinged with brutal sarcasm, as in the works of Otto Dix and George Grosz.

The violence of World War II and the resultant appeal of Existentialism usher in an era of first Surrealism, as an escape from Fascism, and then an increased artistic dwelling on human suffering and alienation. Picasso’s Bust of a Woman with a Hat (Dora) (top of this review) embodies this disjointed time in war-torn Europe, while Jean Dubuffet’s monstrous anti-portraits depict the post-war world of “a society aware of its own decline.” In the concluding section, Alarco extends her analysis of the portrait to the nude, perhaps the most fascinating section of the exhibit. Describing the modernist strategy of “exotic exaggeration of the naked body to convey feeling,” Alarco presents Lucian Freud as “the artist of modern times who has best managed to convey the vulnerability of the human body.” With this final section, Alarco beautifully connects the innovations of Picasso at the start of the 20th century with those of Freud closer to the end.

The Mirror and the Mask: Portraiture in the Age of Picasso presents a stunning variety of portraits from modern art, culling together all the big names as well as the minor masters indicative of their time or certain concerns. The curators masterfully weave this huge amount of raw material into illuminating threads comprising the larger fabric of what the modern portrait has struggled to become. Picasso remains the focal point around which the exhibit turns, but the power of art to portray the human condition (and the strategies we use to deal with that condition) in his and others’ hands rises unmistakably.

[Many thanks to the Kimbell Art Museum for providing me with a review copy of the catalogue to The Mirror and the Mask: Portraiture in the Age of Picasso as well as the images above from the exhibit.]

Cool blog. I enjoyed looking at the paintings. I am a big fan of pop art, mostly, but I like Picasso, too.

Thanks for stopping by. I used to be a little cool to Pop Art, except for the more comic book influenced stuff by Lichtenstein, but I've grown to appreciate Warhol more in the last few years. I hope you enjoyed the review. If you're a fan of Picasso's portraits or the modern portrait in general, this is a must-read text.