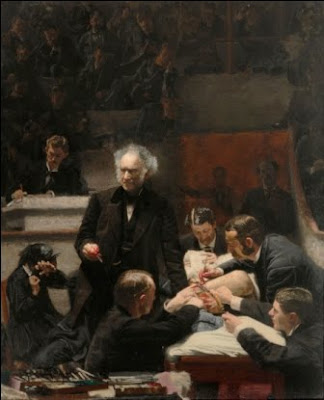 “[The painting is] one of the most powerful, horrible and yet fascinating pictures that has been painted anywhere in this century,” wrote the New York Tribune in 1879 of then 31-year-old Thomas Eakins’ The Gross Clinic. “But the more one praises it, the more one must condemn its admission to a gallery where men and women of weak nerves must be compelled to look at it. For not to look at it is impossible.” Eakins’ masterpiece suffered the indignity of a jury’s rejection at the 1876 Centennial in his native Philadelphia, but in An Eakins Masterpiece Restored: Seeing The Gross Clinic Anew at the Philadelphia Museum of Art, that injustice is posthumously corrected by bringing back Eakins’ original artistic intentions after nearly a century of conservationist interventions. The savage grace of The Gross Clinic returns in the PMA’s saving efforts to restore Eakins’ sense of tone and atmosphere. How this iconic image of the brutal ballet of science and art fell into a twisted tango of aesthetic missteps over time serves as a cautionary tale as well as a hopeful one in its new restoration.

[Many thanks to the Philadelphia Museum of Art for the image above and inviting me to the press preview for An Eakins Masterpiece Restored: Seeing The Gross Clinic Anew, which runs through January 9, 2011.]
Posted by Bob at 8:01 PM