I remember buying as a teen an abridged version of John Ruskin’s Modern Painters in a remainder bin (some of the color plates were missing) and thinking it was the greatest work of art criticism ever. Born February 8, 1819, Ruskin came at the end of the Romantic era and lived through the Victorian age. Watercolors such as his Cascade de la Folie, Chamonix (above, from 1849) demonstate Ruskin’s eye for detail as well as his Romantic heart, searching high in the Swiss Alps for the spiritual as Wordsworth, Shelley, and so many others had done before him. In many ways, Ruskin was the greatest art fan of his age, using his father’s wealth to ingratiate himself into the art world, including the life of J.M.W. Turner. Using his father’s money, Ruskin purchased several Turners. When critics attacked Turner during his evolution into a more abstract artist, Ruskin wrote a fan letter to the artist offering his pen in Turner’s defense. Turner thanked Ruskin and refused his offer, but Ruskin rose to defend Turner throughout Modern Painters and afterwards, holding Turner up as the epitome of the great artist while, unfortunately, denigrating nearly everyone else from Michelangelo to Dürer. 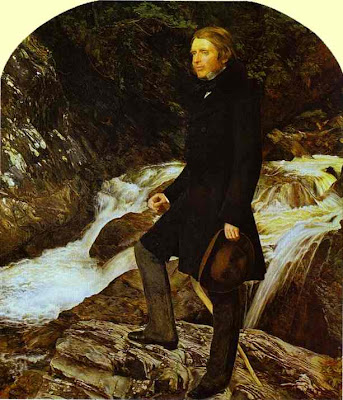 After Turner’s death, Ruskin sought out another painter to champion, preferably a younger artist whom he could mold in the image of his own critical beliefs. When John Everett Millais faced critical attacks for his “blasphemous” painting Christ in the House of his Parents, Ruskin seized the opportunity to take him as his protegy. Ruskin asked Millais to paint his portrait (above, from 1854) surrounded by the natural setting of Scotland, home of his young wife Effie Gray. Ruskin sent Millais out to paint from nature in the company of Effie. Over time, Millais and Effie fell in love, leading to Effie’s request for an annullment from her loveless (and, perhaps, unconsummated) marriage to Ruskin. Ruskin later savagely attacked Millais’ paintings in his quest for revenge. 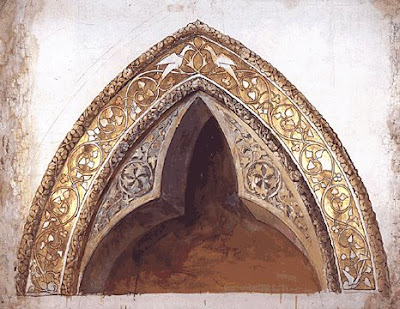 Ruskin remains a strange figure in the history of art criticism. His attention to detail (as seen in the lecture diagram above, from 1853) and ability to recognize earlier than most the talents of Turner and Millais make him a fascinating even today. Reading Modern Painters as an impressionable youth, I was simply captivated at how he could bring aspects of nature to life, from stones to clouds, with stunning specificity. Today, however, I see the limitations of Ruskin’s thinking more than its value. As Ruth Bernard Yeazell argues in her Art of the Everyday: Dutch Painting and the Realist Novel (which I shall review shortly), Ruskin’s dislike of Dutch genre painting goes beyond aesthetics to a dislike of the vulgar, which translates to a dislike of the middle and lower classes. Ruskin reeks of an effete, cold elitism—a recoiling from the human touch in art and, perhaps, in life.