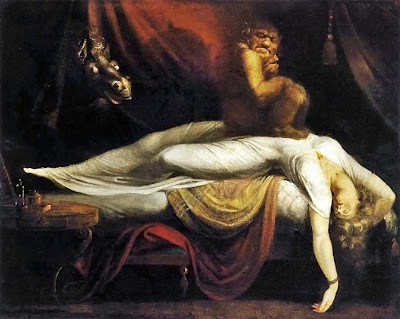 If you know one painting by Henry Fuseli, it’s most likely one of his versions of The Nightmare (above, from 1781). Born February 7, 1741 in Zurich, Switzerland, Fuseli spent his most productive years as an artist in England. Works such as The Nightmare created an instant sensation, ushering in the era of Gothic-tinged Romanticism in painting that would culminate in the works of William Blake and Caspar David Friedrich. Although Fuseli painted works on the cutting edge of his time, he maintained a good relationship with Sir Joshua Reynolds, the embodiment of the British establishment in art, and even joined and later taught at the Royal Academy. Fuseli’s ability to push the envelope while still making the right connections testifies to the quality of his art as much as that of his personality. 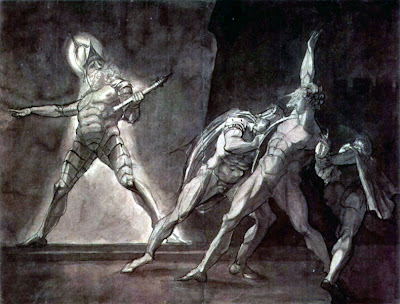 Fuseli used his skills to illustrate the fantastic to put pictures to the words of the two writers the Romantic generation held in the highest esteem—John Milton and William Shakespeare. The Romantic poets from Blake to Keats looked to those two figures as the exemplars of what a poet should and could be. Fuseli helped feed that adulation with such images as his Hamlet and His Father’s Ghost (above), which captures the tension of that moment when Hamlet confronts the ghost of his murdered father and questions whether the spirit’s request for revenge is a trap for his own soul. The emphatic gestures and exaggerated musculature of the figures would later inspire Blake, sixteen years younger than Fuseli, to create similar characters based on his own works of literature as well as those of Milton and others. 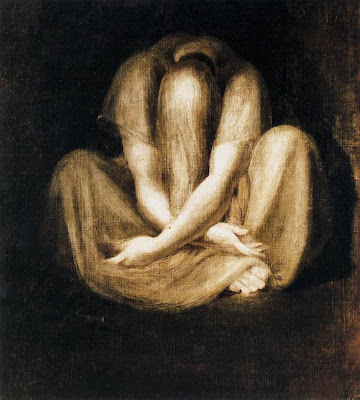 When I look at Fuseli’s Silence (above, 1801), I can’t help but think of my beloved Blake. The despondent figure looks so much like something out of Blake that it’s easy to forget that Fuseli came first. Fuseli, like Blake, practiced liberal, some would say radical, politics, traveling in intellectual circles that included influential figures such as Thomas Paine, William Godwin, Joseph Priestley, Erasmus Darwin, and Mary Wollstonecraft. Like so many intellectuals of that generation, Fuseli personally felt pain over the descent of the hopeful French Revolution into the bloodthirsty Reign of Terror. Silence, in some ways, can be seen as Fuseli’s reply to those humanist ideals crushed by tragic reality. Although Fuseli taught many students, including John Constable, Blake remains his most clear descendent. Just through his ability to spark the already fertile imagination of Blake, Fuseli deserves a greater place in art history.
Posted by Bob at 6:22 PM