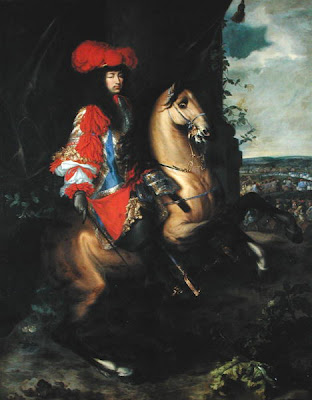 When Louis XIV, the Sun King, saw the works of Charles Le Brun painted on the occasion of his return to Paris, he almost immediately named him “First Painter to His Majesty,” and later crowned Le Brun with the title of “the greatest French artist of all time.” Born February 24, 1619, Le Brun helped forge what came to be known as Louis XIV style, developing a specific “look” to go along with the power of the throne. Portraits of Louis XIV by Le Brun (above) show the monarch as the ultimate action hero—the energetic superstar upon whose larger than life existence rested the fate of the French nation and people. Few artists painted better public relations for their patron than Le Brun did for Louis XIV. 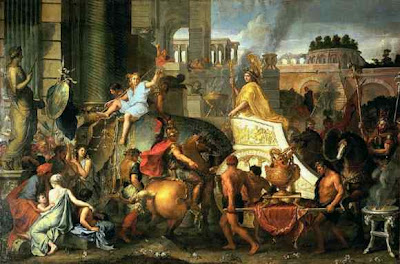 Like any good propagandist, Le Brun needed to find precedents for his subject’s greatness in history, some link to the glorious past. Taking Alexander the Great as his ideal, Le Brun painted a series of works based on the ancient adventures of the young conquerer, including Alexander in Babylon (above, from 1661). In addition to being great PR, these Alexander paintings are also great painting—not always a given in the world of official art. The rollicking collection of figures against a beautifully painted landscape recalls the works of Nicolas Poussin, with whom Le Brun studied in Rome in the 1640s. Poussin’s dual love of antiquity and nature rubbed off on his pupil, as seen here. I especially like Alexander in Babylon for all the tiny little narrative scenes played out by the clusters of characters, with the golden chariot of Alexander remaining the quiet eye of the storm as he surveys his latest world to conquer. 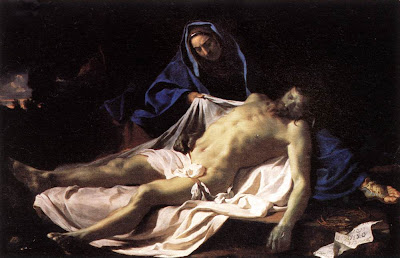 Le Brun used his talents to decorate the royal palaces of Versailles, either with his own work or by directing the work of other artists. By using the full power at his disposal, Le Brun set the standard for French art for a generation and, perhaps, beyond. The lessons of Le Brun’s classicism in the service of contemporary power were not lost on French neoclassicists such as Jacques-Louis David when the royal power slipped into the hands of Napoleon and the French People during the French Revolution. It is important, however, to always remember that Le Brun’s talent never faltered despite his comfortable position. His Pieta (above), done for one of the royal altarpieces, takes the familiar religious trope and adds a beautiful physicality to the depiction of Christ, whose sprawling dead body convincingly weighs down upon the Virgin Mary. As much as Louis XIV used Le Brun, Le Brun in turn used Louis XIV in the sense that he took that royal patronage and created timeless works of art that served his contemporary master yet also kept an eye on the future.