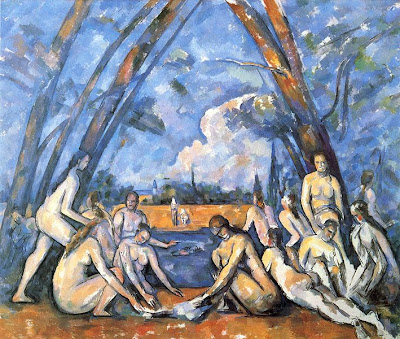 I’ve been looking forward to the Philadelphia Museum of Art’s Cezanne and Beyond exhibition, which opens next month, for a long time now. I still have a shirt from the 1996 exhibition titled simply, Cezanne. Paul Cezanne looms over the history of modern art like a brooding giant. Born January 19, 1839, Cezanne over the years became many things to many artists. Matisse called Cezanne “a god of painting.” Picasso called Cezanne " the father of us all." Thanks to the PMA’s great collection of Cezannes, including the Large Bathers (above, from 1898-1905), and to the also formidable Cezanne collection at the nearby Barnes Foundation (including another version of Large Bathers), there will be wall-to-wall Paul. In addition to Matisse and Picasso, the new exhibit promises to connect the dots between Cezanne and such varied artists as Max Beckmann, Georges Braque, Pierre Bonnard, Charles Demuth, Alberto Giacometti, Arshile Gorky, Marsden Hartley, Jasper Johns, Ellsworth Kelly, Fernand Léger, Brice Marden, Piet Mondrian, Giorgio Morandi, Liubov Popova, and Jeff Wall. Amidst this name-dropper’s paradise, I hope that Cezanne’s own achievement doesn’t get lost in the crowd. 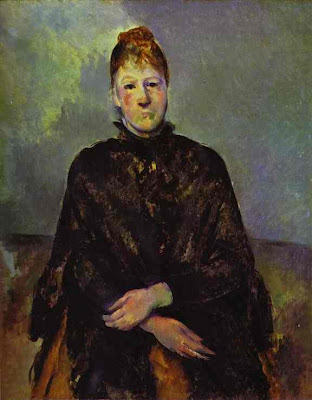 I’ve always thought that Cezanne painted the saddest portraits ever. Madame Cezanne seems to epitomize the long-suffering spouse of the long-unrecognized genius in works such as Portrait of Mme. Cézanne (above, from 1885-1887). Cezanne’s slow painting methods, better suited to mountains and still lives, clearly tested the patience of his sitters. I’ve always loved Cezanne’s portrait of his father for the simple fact that the Cezanne père could no longer sit still and began reading the newspaper. In retaliation, Cezanne fils painted a notoriously liberal daily in his father’s conservative hands. Legend has it that fruit would often rot before Cezanne finished painting it. Perhaps as a consequence, the flesh of many of his portraits, including his self-portraits, resembles that of overripe fruit on the verge of turning bad. I look at the piled up shapes of Cezanne’s self-portraits and see a man making a mountain of himself, as immovable as a mountain range against those who failed to see the genius behind his new way of painting. 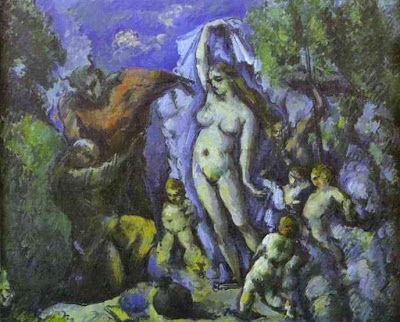 Unlike many of his fellow Post-Impressionists, Cezanne remained a devout Roman Catholic all his life. Van Gogh, among others, retained a sense of the spiritual dimension, but he sloughed off the skin of conventional religion. Cezanne, however, never saw a conflict between his art and his faith, incorporating the legends of Christianity, such as The Temptation of St. Anthony (above, from 1875), as easily as those of ancient mythology. "When I judge art,” Cezanne said, “I take my painting and put it next to a God-made object like a tree or flower. If it clashes, it is not art." Many would be surprised to hear that Cezanne didn’t set out to “clash” with nature in his distinctive painting style. In actuality, Cezanne sought to recreate the creative act of God in his art—breaking down the “God-made object” into its essential components and then reassembling that same object in his painting. Some would argue that Cezanne’s works lose something in the translation, but Cezanne would rebut that his new vision of God’s vision is the residue of his individual soul touching upon the universal and leaving a mark. Cezanne took the everyday and brought it beyond the commonplace, sifting it through the fine mesh of his particular sensibility. Those who came after him recognized the genius of Cezanne’s method if not the beauty of his style. By harmonizing in his own way with God and nature, Cezanne himself became “a god of painting” and, by example, a “father” of all modern painters.
Posted by Bob at 12:01 AM

"I’ve always thought that Cezanne painted the saddest portraits ever" I never thought about it, but I agree with you!

I love Cezanne, maybe because my family is from Aix en Provence...