The Great Chain of Being 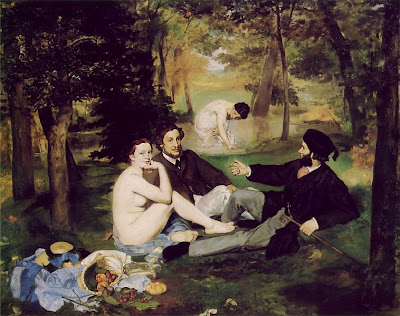 I’ll confess that I will always find the idea of the Great Chain of Being attractive, despite what post-modernists say. Just call me old fashioned. My mind simply works better when trying to find a connect everything to everything else in a coherent universe, especially when it comes to art. Even someone as game-changing and ground-breaking as Edouard Manet cannot escape the net. Born January 23, 1832, Manet finds himself hailed as the father of modern art, the first artist to break with the old sensibilities and depict modern life as it is, shorn of all falsifying mythology. Manet offered The Luncheon on the Grass (Le déjeuner sur l'herbe) (above, from 1863) as a first glimpse of that brave new world. Yet, how much of this is really new? Art historians point out that Manet “borrowed” the composition from a drawing by Raphael of The Judgement of Paris. The strange, “modern” juxtaposition of dressed and nude figures may have come from Manet’s study of the Renaissance paintings in the Louvre. Sixteenth century works The Pastoral Concert and The Tempest, both likely begun by Giorgione and completed by his student Titian, set the stage for the nineteenth and twentieth centuries. As much as we may want to isolate Manet as a lone genius blazing a trail into the unknown, Manet steps backwards and points to the past to point to the future. 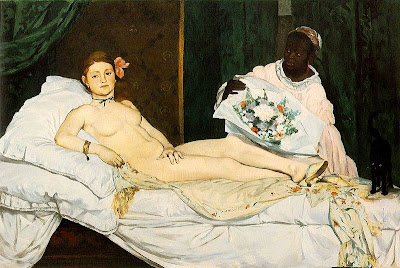 Where The Luncheon on the Grass befuddled, Manet’s Olympia (above), also from 1863, enraged. Manet completely gives up the pretense of mythology as a way of making the female nude acceptable. But how valid was the entire pretense of mythologizing nudes, especially female nudes, to begin with? Again, Manet looked to the Renaissance and Titian, particularly The Venus of Urbino. The gamesmanship of calling a recognizably realistic nude a Venus or Aphrodite and thus giving the painting respectability always seemed a strange gentleman’s agreement. Manet breaks that agreement in Olympia, recognizing that Titian himself most likely never fully signed on either. As “modern” as Olympia appears, her knowing and direct look reflects similar glances in previous artists as well. Goya's Nude Maja, which Manet most likely knew in some form from his study of Spanish paining since Velazquez, challenges the viewer with her eyes more than half a century before Manet’s Olympia does. Manet rejects the idea that confident women comfortable in their skin can only be fictional and simultaneously points back to all the “real” women since the Renaissance. 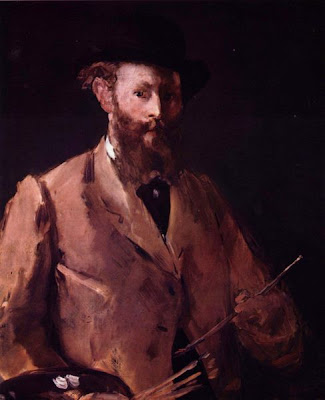 Manet, however, didn’t turn a blind eye to the art world going on around him. Although he never accepted the label “Impressionist” or agreed to exhibit with the Impressionists, Manet appreciated what the Impressionists were trying to accomplish and became friends with Edgar Degas, Claude Monet, Pierre-Auguste Renoir, Paul Cézanne, and Camille Pissarro. Manet’s Self-Portrait With Palette (above, from 1879) shows Manet trying to keep up with the times and paint in an Impressionist manner himself, momentarily abandoning his clear draftsmanship yet still clinging to his dark, Spanish background. Even more forward-thinking, Manet encouraged women artists Berthe Morisot and Eva Gonzalès when even some Impressionists continued to cling to the all-boys’ club mentality. Manet falls into the cracks between many categories because he doesn’t paint like a true realist and his works are Impressionist in their independent spirit yet not Impressionist in visual style. The inability to lump Manet in with others isolates him. In truth, Manet belongs everywhere, stretching across styles and even across space and time. More than his art, it is Manet’s mind, always searching for new ways of seeing with total disregard for the rules, that helps create the atmosphere in which modern art is born.

What a shame that you don't seem to get many comments! Having recently discovered your blog, I find your notes to be generally very perceptive and useful.

I believe that the pose the gentleman on the right of Dejeuner sur l'herbe is the same as a "river god" by... mmm I can't remember, but will try to look it up.

You are quite correct,the streams of influences flow beneath the most unlikely covers.

I second the compliment, although I imagine we're two of many interested readers.

Thanks, Enkidu and Linnea!

I'm glad whenever anyone takes the time to comment, and tickled pink when someone says they get some pleasure from my writing