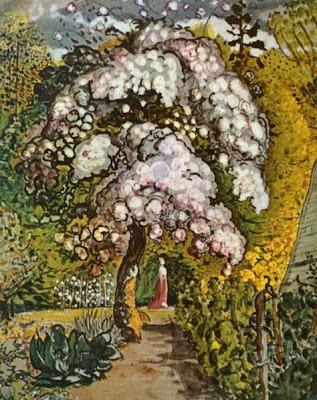 What could it have been like for a young artist to meet William Blake in person? Intimidating, inspiring, invigorating, all of the above, and more. Through the engraver John Linnell, who would one day become his father in law, Samuel Palmer met Blake in 1824 and was never the same. Born January 27, 1805, Palmer became the one true disciple of Blake’s style. Blake’s Illustrations of the Book of Job stuck in Palmer’s visual memory for the rest of his life, coloring his perception of nature through their depiction of the pastoral landscape. Palmer eventually superimposed those Blakean landscapes onto the vistas surrounding his home in Shoreham, England, such as Garden in Shoreham (above, from 1820-1830). The garden here literally explodes with fertility, with the top of the tree resembling a mushroom cloud after a nuclear detonation. Palmer releases the energy of the atom in such scenes, taking mundane scenery and making it represent the vastness of the cosmos. Palmer tuned in to Blake’s message before tuning in on Blake was cool. 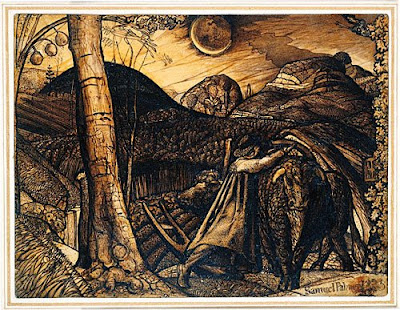 Before meeting Blake, Palmer lived with his father in London and frequently visited the British Museum to study the prints of Albrecht Durer and other masters. This study not only helped further Palmer’s draftsmanship, but also showed him the potential of working in monochrome. Palmer’s A Rustic Scene (above, from 1825) is a watercolor done entirely in shades of brown, which adds to the rustic quality of the image. The brown lends the scene and earthiness that vibrant color might not. Late in his career, Palmer worked heavily in engravings, becoming so demanding in his perfectionism that one printer claimed he rather see the devil walk through his door than Palmer with a handful of corrections to be made. It’s amazing to think of the diversity of Palmer’s eye when you place works such as Garden in Shoreham next to A Rustic Scene.

After Blake’s death, Palmer assumed the mantle of the “visionary” artist in England, the cult figure around which younger artists would gather. A group of young artists calling themselves the Ancients that once surrounded Blake now surrounded Palmer. They longed to be initiated into the spiritual clique that produced such works as Palmer’s Harvest Moon, Shoreham (above, from 1830-1831). Because of earlier criticism of his Shoreham paintings, Palmer refused to exhibit them and only allowed this select society to see them. Many of these works went unseen by the public until the twentieth century. Some were actually destroyed by Palmer’s son, who thought them too feminine and feared they would harm his father’s reputation. Today, modern artists see Palmer’s penchant for color and highly charged landscape as amazingly prescient, just as Blake himself seemed born much too early. Thanks to several museum exhibitions in the last few years, Palmer’s reputation as a great artist in his own right has helped bring him and his artwork out of the considerable shadow of Blake.
Posted by Bob at 12:01 AM

Thanks for a very interesting post.
there was a exhibition on his work along with others 'Poets in landscape' It was a touring exhibition. I think about a year ago at our local gallery Pallant House Chichester (have a look you may find site of interest)
thanks once again for a interesting Blog

These paintings are so beautiful and moving. I find your blog really interesting: plenty of things to discover here!

Hello!
It is interested very much.
Please link to this site.
http://love-marriage-lover-couple.blogspot.com/

Thanks for your examples of an interesting an versatile artist. I first encountered Palmer at the NAG (National Art Gallery, Canberra) in an exhibition entitled "Turner to Monet" I was previously unaware of him. Not much was made of his connection to Blake, though it is certainly apparent in "The Sleeping Shepherd" and in your examples. Perhaps after his visit to Italy the influence of Turner and earlier landscapists predominated? I also thought I detected a whiff of symbolism, before the fact, as it were. I hope Palmer will become better known but maybe his variety counts against him - harder to pin a label on!

Your Samuel Palmer post proves two things: Palmer was one of the greatest artists who ever picked up a brush, and your blog is one of the finest on the web.

Thanks, everyone, for commenting. It's great to see that Palmer's still got the ability to grab a hold of people.