When Art Young published his political cartoon titled Poisoned at the Source (above) in the July 1913 issue of The Masses, The Associated Press sued him for libel. Born January 14, 1866, Art Young fought against the establishment at every turn, taking on the compliant media that Young saw assisting capitalism in its oppression of the people. Young married his passion for justice with his passion for art at a young age. After looking at a book illustrated by Gustave Dore, Young decided to become an illustrator himself, eventually studying at the Art Students League of New York, where he may have encountered several of the members of what later became known as the Ashcan School. Whereas the Ashcan School artists sought to depict the new urban existence of big American cities such as New York at the beginning of the twentieth century, and some of those artists, such as John Sloan and George Bellows dabbled in what could be called Socialism, none of them took their art as far left politically as Young. Sloan, the art director of The Masses, left over the ideological breach. "To me this magazine exists for socialism,” Young then said of The Masses. “That's why I give my drawings to it, anybody who doesn't believe in a socialist policy, as far as I go, can get out." Young believed in The Masses as an antidote to the “poison” spread by the AP and other mainstream media outlets. 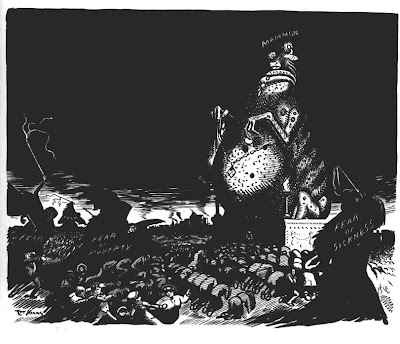 Young truly saw the battle for social justice as a religious crusade. “I think we have the true religion,” Young told an interviewer in 1940 in his defense of his Socialism. “If only the crusade would take on more converts. But faith, like the faith they talk about in the churches, is ours and the goal is not unlike theirs, in that we want the same objectives but want it here on earth and not in the sky when we die.” In A Compulsory Religion (above, from 1912), Young portrays capitalism as the great god mammon, before whom the masses must bow out of fear of poverty and sickness. It’s amazing that we face the same concerns today, nearly a century later, as health care and bankruptcy haunt Americans as the twin specters of economic recession. Young uses amazingly deep blacks to depict the dark mood and ever-present fears of the people, whom he dwarfs before the gluttonous, grotesque god of greed. Although surrounded by the Impressionist-influenced Ashcan School artists, Young instead approaches the techniques of the German Expressionists in visually plumbing the depths of the collective American psyche. 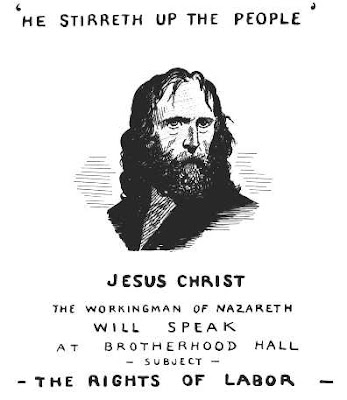 I find Young’s illustrations still fresh and relevant today. Although he points to specific concerns of his time, those concerns still remain with us as long as social and economic injustice reigns. The timelessness of Young’s crusade coincides with the eternal message of Christianity in Young’s He Stirreth Up the People (above, from 1914). For Young, Jesus is “The Workingman of Nazareth” speaking to other workers to stand up for their rights. Here is Jesus the community organizer and rabble rouser causing trouble who refuses to be silenced. The U.S. Government tried to silence Young and The Masses in 1918 under the Espionage Act, claiming that Young’s anti-war comics interfered with the draft for World War I. The charges were eventually dropped, but The Masses ceased publication soon after. Young, however, continued to stir up trouble in other publications, practicing his personal brand of Christianity that placed the Beatitudes over the Ten Commandments. “Blessed are they which do hunger and thirst after righteousness: for they shall be filled,” said Jesus. Art Young lived those words and drew them until the end.