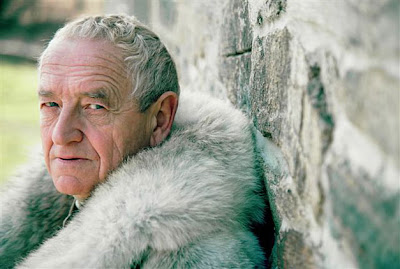 “Wyeth died.” I was at work talking to Annie on the phone when I saw that two-word e-mail come from a friend. Andrew Wyeth (above) passed away early this morning peacefully in his sleep at the age of 91. I told Annie instantly, still stunned. Andy Wyeth seemed like someone who could go on forever. A world without Wyeth seemed inconceivable. Yet, he is gone. I imagine him somewhere in the afterworld, sitting with N.C. and talking shop. And laughing that great, deep down in his bones laugh. Even at 91, there was something eternally young and almost elfin about Andy and that came through in his art. Elves can be mischievous, too, as Wyeth demonstrated throughout his life. “I’m not a nice man,” Wyeth once said. Instead, Wyeth was quintessentially human in his art, plumbing the depths of both the good and bad in human nature, from the warmth of his scenes of African-Americans living their simple lives to the chilling cruelty in Karl Kuerner, Sr.’s ice-blue eyes. 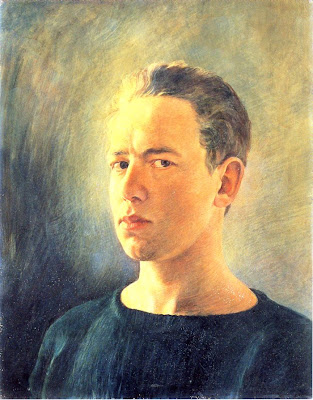 The Brandywine Museum already has a memorial page set up, including an Andrew Wyeth Blog at which you can pay your virtual respects. It will be interesting to see how the Brandywine evolves after Andy’s death. Andy blocked many attempts to study his long career, which stretched back all the way to the 1930s. (Wyeth’s 1938 Self-Portrait appears above.) Will the Brandywine become finally The Andrew Wyeth Museum? Andy was certainly prolific enough to provide enough material to assemble new exhibitions for a long, long time. The Brandywine has long been known as the museum of the Brandywine School, but the other artists of that description have long taken a back seat to Andy, including his father. Much of the Wyeth oeuvre has languished in storage, unseen by the public. Often, new paintings would appear in the Andrew Wyeth gallery of the Brandywine with little or no fanfare and disappear just as mysteriously. Hopefully, the fears that overexposure would hinder Andy’s work have died with him. Now is the time for us to see Wyeth whole. 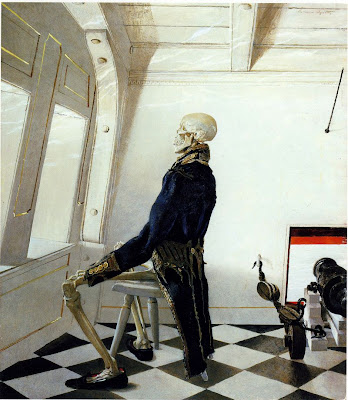 I regret never having the chance to meet Andy. I came relatively close when hoping to do a piece or perhaps even a book on his sister Carolyn, whose upcoming exhibition at the Brandywine may now be overshadowed by Andy’s death. Age, illness, shyness, and just a plain weariness over covering well-trodden ground kept Wyeth from doing many interviews over his last years. The full portrait of Wyeth remains to be written. In 1981, Wyeth painted Dr. Syn (above), a “self-portrait” based on x-rays of himself. Wyeth was never so self-revealing in life, even though his paintings always came from some piece of his life. Wyeth’s art was almost always the cycling and recycling of memories—both his own and those of the landscape around him. Now that he is gone, we will discover how many of those memories were taken with him and how many were recorded for us to study and learn from. I believe that today is not the last day of Andrew Wyeth’s life but rather the first day that the world truly begins to appreciate and look to understand this remarkable man and his unforgettable art.
Posted by Bob at 6:45 PM