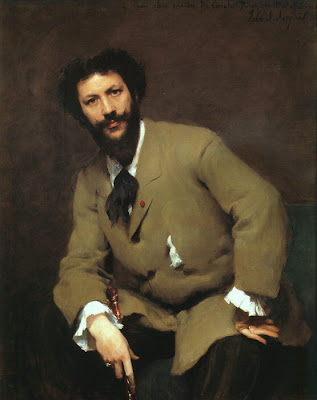 Zelig will always rank up there among my favorite Woody Allen films. Allen’s depiction of a human chameleon mingling with the famous faces of the 1920s beautifully captures the spirit of the time while humorously analyzing the human need for acceptance—the drive to blend in and belong. Like Zelig, John Singer Sargent often adapted the characteristics of artists around him and incorporated their style into his portraits of them. Born January 12, 1856, Sargent lived a nation-less life with his travel-mad parents until moving to Paris in 1874 to study with Carolus-Duran. Carolus-Duran taught Sargent to paint portraits in the style of Diego Velázquez. Upon finishing his studies with Carolus-Duran, Sargent painted his Portrait of Carolus-Duran (above, from 1879), which perfectly illustrates the teacher’s Velazquez-inspired technique. Carolus-Duran not only taught Sargent his style of painting but also how to be a painter. Sargent’s teacher counted Fantin-Latour, Courbet, Manet, and Monet among his many friends, setting an example for Sargent, who would develop a large, international circle of artist comrades that nourished his art. The good karma such associations brought helped make Sargent a diverse, well-rounded visionary who could seemingly paint in any style with true depth and insight. 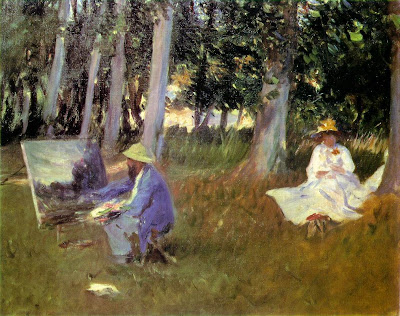 Sargent first met Claude Monet in 1876, when Sargent was an unknown but promising student. By 1885, Sargent’s rising prominence in the art world helped him get closer to Monet. Although Sargent made his fortune and fame through realistic, if slightly romanticized portraiture, he admired the Impressionists and painted Claude Monet Painting by the Edge of a Wood (above, from 1885) in an Impressionist style. The freedom and color of Monet’s Impressionism must have seemed like a great release for Sargent after all the dark backgrounds and fine clothing of his lucrative portrait practice. Monet didn’t care much for Sargent’s portraits in terms of subject matter, although he recognized the genius of Sargent’s technique, but Sargent saw the greatness of Monet and paid great tribute to him by emulating Monet’s style. Lesser, less confident artists might have resented the one-sidedness of their relationship, but Sargent kept true to his pattern and took the best elements of Impressionism and made them his own. 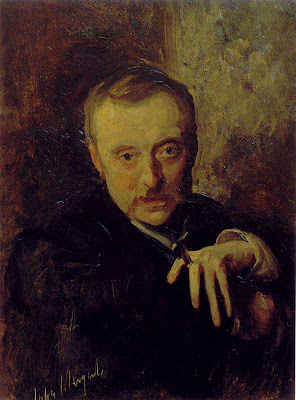 Sargent’s Impressionist journey reminds me of Mozart’s late symphonies written during his travels and named after their place of origin: No. 31 "Paris," No. 32 "Overture in the Italian style," No. 35 "Haffner," No. 36 "Linz," and No. 38 "Prague." At each destination, Mozart took the local folk tunes and styles and did them better than the locals. One of Sargent’s final artistic “destinations” came in the person of Antonio Mancini, whom Sargent humbly called the greatest painter alive. Sargent painted his Portrait of Antonio Mancini (above, from 1898) while trying to find portrait commissions for Mancini in England. Sargent took the gifted, yet mentally ill artist under his wing and, simultaneously, studied Mancini’s thick impasto style closely, employing it marvelously in the portrait of Mancini. Mancini later scratched into his portrait the words, “Mancini thanks/ devotedly Mr. Sargent/ whom is so good/ to this bad painter Mancini/ London.” In that act of profound kindness, Sargent garnered a score of good karma that perhaps contributed to his own charmed life. Sargent returned to his customary lyrical portrait style, but he allowed himself the occasional side trips into Impressionism and impasto, always keeping the people in his life in his heart through his art.

Love the Zelig reference--the Culture Club invocation in your header is, unfortunately, less welcome (but then again, those who forget the past...).