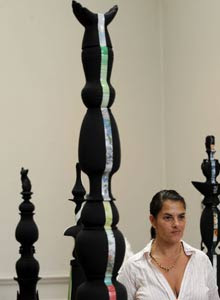 When Colin Powell tried to defend the United States’ continued presence in Iraq, he invoked what he called the “Pottery Barn rule” or “You break it, you bought it.” Of course, Pottery Barn has no such rule, thus protecting Powell’s streak of disseminating misinformation, but could you imagine if museums had such a “You break it, you bought it” rule? Just last month a woman tripped at a Royal Academy exhibition and knocked over a 9-foot-tall sculpture titled Christina by Tatiana Echeverri Fernandez, smashing it to pieces. (The sculpture appears above, with show curator Tracey Emin standing alongside.) Fortunately for the stunned woman, nobody presented her with a bill for £6,000. Laura Barnett of The Guardian published a piece last month titled “Breaking Art” recounting Christina’s fall along with a litany of other art disasters. It turns out that most broken art is broken by professionals—curators, gallery staff, etc.—mainly thanks to the fact that they’re the ones called upon to move such fragile treasures from place to place. Still, I confess to moments of vertigo when face to face with some precious works of art with no protective barriers in between. It’s great to have unfettered access, but my inner klutz knows his potential for destruction and holds me back just enough. 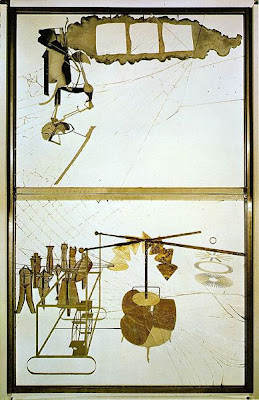 One of the most famous cases of breaking art, which Barnett doesn’t mention, involved Marcel Duchamp’s The Bride Stripped Bare By Her Bachelors, Even (aka, The Large Glass; above, from 1912). Workmen moving Duchamp’s work dropped it and shattered the pane of glass Duchamp had created his images upon. Making lemonade out of lemons, Duchamp viewed the patterns of shattered glass as a happy accident and incorporated the adventure into the work itself. Duchamp loved to create works that invited gallery-goers to touch, such as his mounted bicycle wheel. Those yearning to give it a spin soon find themselves under the watchful gaze of a museum guard. Always the iconoclast, Duchamp would be disappointed to know that his works no longer feel that human touch, but such is the price to pay for later generations to see such works intact. 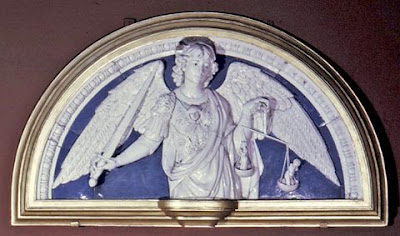 Of course, accidents do happen, with nobody to blame. When Andrea della Robbia’s Saint Michael the Archangel Weighing Souls (above) recently came loose from its wall moorings and fell to the floor of the Metropolitan Museum of Art, fingers pointed at everyone who could possibly be blamed. Fortunately, della Robbia’s work can be saved, thanks to a miraculous mid-air flip by Saint Michael that helped it land on its flat side. As someone who has walked through a museum or two with a baby in a baby carrier (both front and rear), I can honestly say that my absolute worst nightmare is to clip some priceless, irreplaceable work of art from a wall mount and send it crashing into oblivion. The Met provides rear baby carriers that are not only difficult to get on but are pure recipes for disaster for the unaware. Fortunately, Alex made his presence continually known (usually by playing with my balding pate), so I was fully aware of just how far I should stand away from the art. No museum will ever exact a price from anyone who has an honest mishap (vandals are a whole different issue), thankfully, but the psychological toll on someone who has erased the work of a skilled artist for all time would be a debt any true lover of art could never fully repay.