A Sun Among Stars

When critics search for the “father” of modern, twentieth century art, they continually roll the calendar back further and further, beginning with Picasso, then Manet, and then usually Velazquez, finding the earlier “father” by looking at whoever the preceding “father” was looking at and learning from. El Greco often gets a nod, which seems quite false considering how his influence and popularity is largely a modern phenomenon—a case of “fatherhood” after the fact. As argued in Late Titian and the Sensuality of Painting (reviewed here), the succession seems to end in the person of Titian, whom even contemporaries called "the sun amidst small stars" during the star-studded Italian Renaissance. Titian died on August 27, 1576, leaving no direct heirs, but artists such as Velazquez, El Greco, and Manet all looked to him for inspiration and guidance. Born sometime between 1477 and 1490 (maybe), Titian’s origins are lost to us, but his role as the origin of much of the modern art sensibility are increasingly being understood. In works such as his Bacchus and Ariadne (above, from 1520-1523), we see Titian’s famous gift for color along with his amazing eye for composition. Such inventive re-envisioning of mythological themes provided a template for later artists to riff on old material in new ways that modern artists still use. 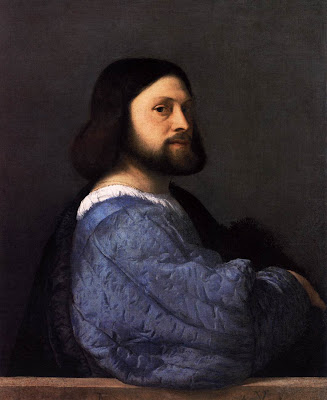 When it comes to artistic bravado, the first names you may think of are Courbet or Pollock, but Titian knew the true meaning of attitude before all of the moderns. Over the centuries, many candidates have stepped up as the model for the Man with the Blue Sleeve (above, from 1510)—the poet Ariosto, one of Titian’s patrons, even Titian himself. What can’t be questioned is the arrogance in the sitter’s eye. The hyperrealism of the painting once led many to think that Giorgione, one of Titian’s contemporaries, was the artist, but the swagger of the sleeve dangling over the side of the window frame is pure Titian. Like Michelangelo, Titian flourished in the patronage-driven art world of the Renaissance while never pandering to the market, letting his amazing skills do the talking. Again, the famous Titian color bursts out of the dark background with the stunning blue of the man’s sleeve, but it is the psychological acuity of the face of elitism that serves as Titian’s signature here. 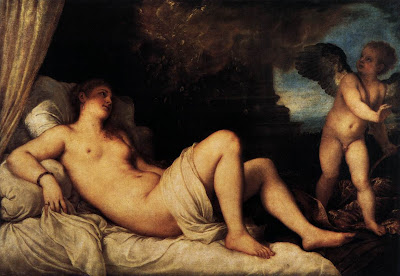 Late Titian and the Sensuality of Painting concentrated on the last twenty-five years of Titian’s life, when his brushwork became increasingly loose and expressive. In Danaë (above, from 1544-1545), Titian paints the nude with the softness and freedom that the Impressionists would later make famous. The pose itself, in which a large-scale nude sprawls across the width of the image, may have inspired Manet to paint his Olympia, the work that launched the Impressionist movement or at least the antiestablishment wing of modern art. Like Manet’s Olympia, Titian’s Danaë takes a real-life courtesan (allegedly the mistress of a Cardinal who commissioned the painting) and mixes contemporary sexual reality and ancient mythology into a crossover hit that coexists on both planes. Such self-conscious playfulness with the nature of reality itself, combined with all his other innovations, helps place Titian on the throne of “father” of modern art, at least until the next artist comes along to topple him off.