Tales of the City


While reading James H. Rubin’s Impressionism and the Modern Landscape: Productivity, Technology, and Urbanization from Manet to Van Gogh, I came away with a much higher opinion of the art of Gustave Caillebotte. Born August 19, 1848, Caillebotte often suffers from an critical inferiority complex thanks to his dual role as patron of the Impressionists as well as being one of them. Rubin’s essential argument (which I’ll discuss more in depth when I post my review) centers around how the Impressionists embraced the trappings of modern life and progress rather than rejected them in a turn back to nature, which is the common narrative hung around the necks of the movement. No artist of the time embraced the post-Haussmann look of Paris as enthusiastically and strikingly as Caillebotte in such images as Paris Street, Rainy Day (above, from 1877). With almost photographic realism, Caillebotte sends the viewer’s eyes shooting down the long thoroughfares of the modernized Paris while simultaneously depicting the modern look of cosmopolitans as they walk in the rain. As Rubin points out, French Impressionism means leisure and nature to most people, but to many Impressionists it meant the world around them, especially the fast-paced, highly modern city of Paris. 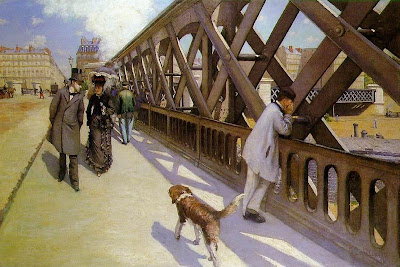 With a nod towards Japonisme, Caillebotte used striking perspective and cropping to generate the sense of speed and movement in works such as Le Pont de l'Europe (above, from 1876). The powerful line of the bridge disappearing into space naturally pulls our attention into the distance. Against that rapid flow, the pedestrians walk towards us. The man addressing the young woman may actually be soliciting her, reflecting the sad reality of prostitution that plagued Paris and most modern cities at the time as women’s rights and options lagged behind the times. The man standing at the rail, covering his face as he looks below, may be contemplating suicide, reflecting the sad reality of fast financial success and ruin as unstable markets led many unstable souls to a bitter end. Adding to this multilayered snapshot of Parisian life, Caillebotte makes extraordinary use of the steel architecture of the bridge itself, finding a beauty in the intricacies of engineering that made such new bridges (and, thus, improved water travel and commerce) possible. 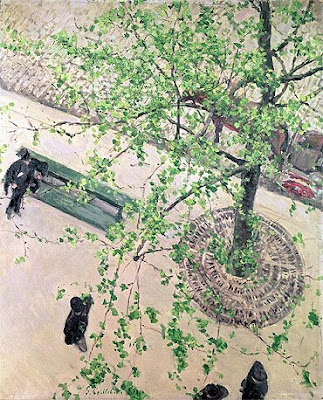 Kirk Varnedoe often praised Caillebotte for bringing a whole new perspective to the Impressionist oeuvre that other, more well-known artists did not. Works such as Boulevard Seen From Above (above, from 1880) show Caillebotte’s love of photography and its ability to capture familiar scenes from unique perspectives. During his lifetime, Caillebotte seemed more of a dilettante than a serious artist, due probably to the great family wealth that allowed him to purchase many of the great works of his friends and fellow artists, such as Degas, Renoir, and others. Little did I know when touring the Barnes Foundation that I was seeing most of Caillebotte’s personal collection, purchased by Dr. Albert C. Barnes after the artist’s death. Perhaps with a greater appreciation of the variety and diversity of the Impressionist movement through works such as Rubin’s, Caillebotte will finally find room to have a name for himself.