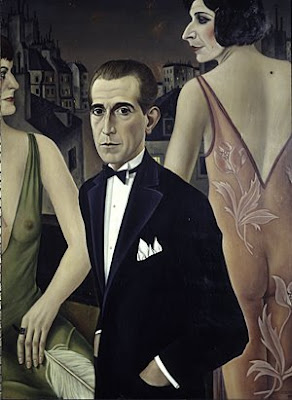 When the New Objectivity movement swept through the German art world during the Weimar years, Otto Dix and George Grosz tried to depict their environment as a distorted nightmare. Christian Schad instead showed that same world with equal nightmarishness but with the chilling clarity of your worst dreams. Born August 21, 1894, Schad painted portraits such as that of Count St. Genois d'Anneaucourt (above, from 1927) that portrayed the fevered café nightlife of German as populated by roughish counts surrounded by the harpy-like young women who either were prostitutes or skirted the very edges of the profession. The see-through dresses of the women on either side of the Count reveal less than desirable flesh, mocking the titillation and sexual freedom of that period, which many Germans saw as a cultural nadir after the shock of the end of World War I. Suave and debonair, the Count plays the role of the playboy, but he doesn’t seem to be enjoying himself very much. 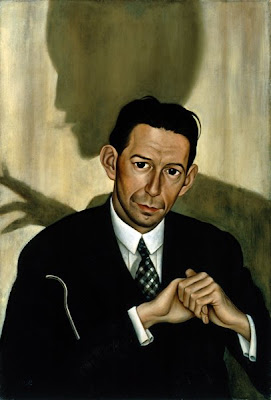 Schad’s Portrait of Dr. Haustein (above, from 1928) similarly shows a member of the social elite in a disturbing light. Behind the good doctor looms the shadow of an unseen figure. The more I look at that shadow on the wall the more I’m reminded of the vampire in F. W. Murnau's 1922 film Nosferatu, who frequently sneaks up upon his victims as the film captures only his shadow on the wall. I’m sure that Schad would have been at least aware of the film, one of the great early works of German cinema, and probably saw it. That vampire’s shadow on the wall in this portrait represents the soul-draining power of the Weimar way of life, which tolerated the excesses of culture as a response to the deprivations of the war years. Unfortunately, those excesses forced a conservative response of equal ferocity, setting the stage for the Nazis’ rise to power. 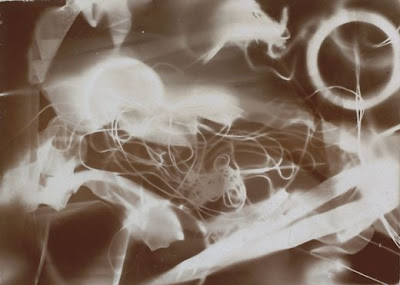 In addition to his socially conscious works, Schad sought to examine the human consciousness itself in Dada-esque photographic compositions he called "Schadographs." In his Schadographs, such as Amourette (above, from 1918), Schad placed found objects (sometimes scavenged from the trash) such as bits of fabric or paper onto light-sensitive photographic paper and then allowed the sun to “draw” images onto the paper. In abandoning the act of drawing to nature itself, Schad tried to circumvent the human psyche in the making of art. Schad often cut the borders of his Schadographs “to free them from the convention of the square” and increase the unconventionality quotient even more. An unconventional man in unconventional times, Christian Schad found himself possessing the drafting skills of a realist in a world that no longer seemed real. In his portraits and photographic experiments, Schad made it his objective to make all objectives seem impossible.