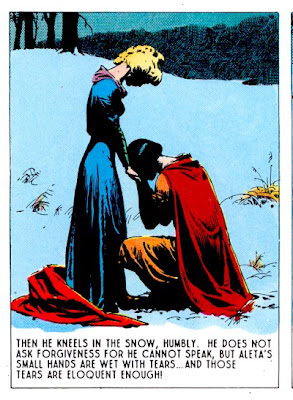 It’s difficult for us today to understand the impact that daily comics had on American culture in the first decades of the twentieth century. When the Great Depression sent America spiraling into economic despair, comics provided a cheap form of entertainment for the whole family. The colorful Sunday sections opened up whole new worlds for children looking for a brighter future, if only in their imagination. Hal Foster’s Prince Valiant harked back to the days of King Arthur but really pointed to a near future in which chivalry was not dead and honor still had a place. Born August 16, 1892, Foster wrapped up that hopeful package in beautifully rendered scenes such as that of Prince Valiant with Aleta (above, from 1939). Influenced by Howard Pyle and Arthur Rackham and other giants of the Victorian Age’s renaissance of illustration, Foster brought a stunningly imaginative hyper-realism to his scenes born of the love of the outdoors he developed during his youth in rural Canada. A life-long love of reading, especially of exotic foreign lands, provided a store of knowledge Foster mined for nearly half a century of Prince Valiant stories. 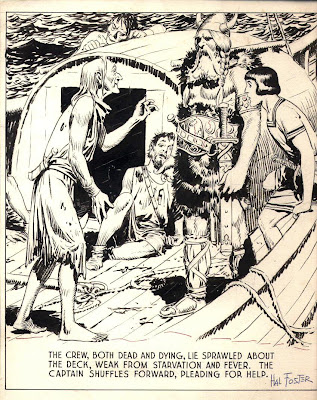 I’m old enough to remember the last decade or so of Prince Valiant comics by Foster. Each Sunday I’d pour over the color comics section and stare at the intricacies of Foster’s work, so very alien next to the minimalist art of Charles Schulz. Anyone who could draw a circle could draw Charlie Brown, but it took knowledge of anatomy, perspective, and how to render drapery to come even close to Foster’s Prince. I’d try to imitate scenes such as Prince Valiant on a ship (above, from 1942) in vain, hoping to run before I could even crawl as a draftsman. I also remember that the continued hold of Prince Valiant on popular culture allowed people to compare baseball player Pete Rose’s haircut, circa 1979, when he joined my beloved Philadelphia Phillies, to that worn by Prince Valiant. I doubt Rose had Foster’s character in mind when making his tonsorial choice, but for a young boy looking for real-life analogues to Foster’s chivalric code, Rose’s hustling style of play seemed the closest thing available at the time. Of course, Rose failed to live up to that code of honor in later years. 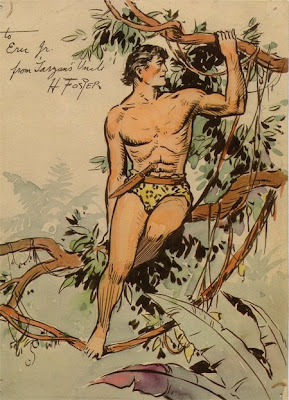 Foster’s link to Prince Valiant is so strong that many forget his earlier work on Edgar Rice Burroughs' Tarzan (an example appears above). William Randolph Hearst actually allowed Foster to begin Prince Valiant and own the strip itself (a rare concession back then) based on the popularity of his Tarzan work, which set the standard for all the Tarzan movies and books to follow. From the jungle to the castle battlements, Foster mastered them all. Later comics artists such as Jack Kirby and Steve Ditko almost universally cite Hal Foster as a seminal influence on their career, making Foster a godfather of sorts to superheroes ranging from Captain America to Spider-Man. The common bond of all these heroes is the code of chivalry, updated, of course, to suit changing times, but not that much different than the days of Arthur as told by the pen of Foster.
Posted by Bob at 12:02 AM