The title of Leo Tolstoy’s greatest work, War and Peace, could stand for the entire history of Russia from its most brutal beginnings to modern-day revolutions. Ilya Repin painted much of that bloody, and often beautiful, history like no other and remains a cult figure in his native Russia even today. Born August 5, 1844 in what today is The Ukraine, Repin painted Ivan the Terrible and his son Ivan on Friday, November 16, 1581 (above, from 1870-1873) with an almost operatic intensity. Repin shows the brutal leader holding his son in an almost pieta-like pose after just strucking down and killing his son in a moment of blind rage. The look of anguished regret emblemizes much of Russia’s historical consciousness, which seems to inevitably alternate between moments of mindless destruction and soul-searching contemplation. Repin mined that history for many of his greatest subjects, reveling in the literature and music that reflected the depths of the Russian soul. 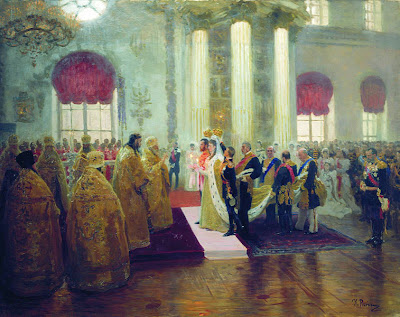 When Nicholas II and Alexandra Fyodorovna wed in 1894, Repin painted the official portrait of the proceedings (above, from 1894). The pomp and majesty of the Tsarist court comes alive in Repin’s work, from the elaborate dress of the religious ministers on the left to Nicolas’ military uniform and Alexandra’s endless wedding gown. Nicolas would become Tsar later that year, the last Tsar Russia would know. A decade later, when Tsar Nicolas II granted greater civil liberties to the Russian people in response to the Russian Revolution of 1905, Repin painted 17 October 1905 to commemorate the people’s joy over the first inklings of a true constitution. I can almost hear Dmitri Shostakovich’s Symphony No. 11 in G minor (Opus 103), titled The Year 1905, playing as Repin’s crowd presses forward. Sadly, Nicolas’ reforms did little in reality, merely delaying the inevitable uprising of the Russian Revolution of 1917, which ended with the horrific death of the Russian royal family and the birth of the Soviet state. 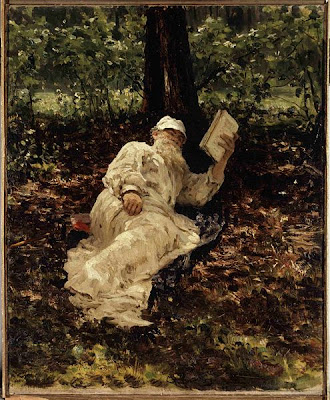 I love Repin’s Portrait of Leo Tolstoy (above, from 1893). Repin painted several portraits of Tolstoy, but this one, in which Tolstoy literally comes in contact with the soil of his beloved homeland while simultaneously indulging in the literature he furthered, seems the most satisfying single image of the author. Repin painted so many images of horror (or preludes to horror) that Tolstoy’s idyll reminds us of the joyful moments in Russian history so often forgotten. At the end of his life, the Soviet government held Repin up as the prototypical "Socialist Realist" artist for other Russian artists to follow (if they knew what was good for them). It would have been interesting to see what Repin would have done with the events that transpired after his death in 1930—mostly the same cycle of war and peace over and over, but with new villains and new heroes to depict. Repin’s realism always captured the humanity of his people with an open eye and, most importantly, an open heart.