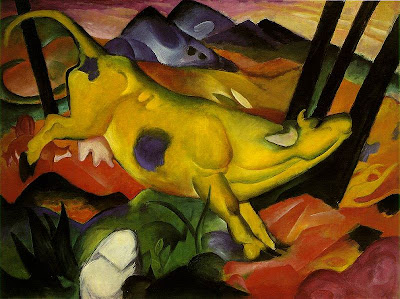 When I left the Gustav Klimt exhibition at the Neue Galerie at the end of 2007, I came away with two calendars to grace my office walls for 2008: one by Klimt, of course, and another by Franz Marc. Born February 8, 1880, Marc’s work remains little known by the mainstream public, and I’ve always failed to understand why. Few paintings make me smile the way that Marc’s The Yellow Cow (above, from 1911) does. Pardon the pun, but it’s “udderly” ridiculous in the way the sallow sow leaps across the scene with a beatific grin upon her face. For all his close study of wildlife, Marc is not about photographic realism but spiritual realism. With bold, unreal color, Marc brings to life the inner life of God’s creatures, including this cow, who seems to transcend the bonds of gravity with pure joy. Marc belongs to the Expressionist movement in color and time period, but he has little of their existentialist angst. When the German Expressionists “discovered” Vincent van Gogh and adopted him as one of their own, many of them copied van Gogh’s depiction of his personal demons. Marc, on the other hand, took away from van Gogh the lesson of the felicity of unadulterated color, extending the technicolor fantasies of van Gogh into an almost abstract sphere and focusing on fauna rather than flora. 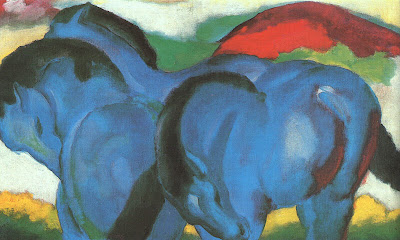 There’s a great sense of dignity in works such as Marc’s The Little Blue Horses (above, from 1911). Marc painted a whole series of blue horses, a major one of which was sadly destroyed in bombing during World War II. It’s truly amazing how Marc could depict different animals with distinctly different attributes and moods. Marc’s The Tiger is all dark, beautiful menace, while The Cat and The Hound show the gentleness and familiar type of beauty of a household pet. In 1911, Marc formed the Der Blaue Reiter group with Wassily Kandinsky and August Macke. I think the collaboration worked because Marc provided the patient, calm balance to the intensely driven Kandinsky, who wanted to revolutionize art with his words and images. Marc also wrote down his ideas on art, but I’ve always found his images to be much more articulate in their depiction of “dumb” animals. 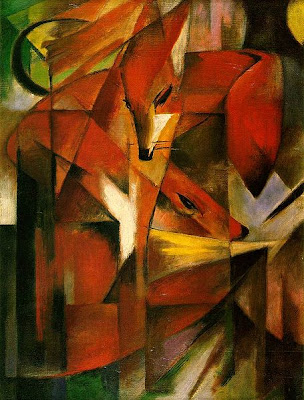 Marc died in 1916, only 36 years old, during the Battle of Verdun of World War I. Just weeks before, Marc and several other prominent artists received word that they would be removed from the front lines, but Marc died before he could be moved to safety—yet another casualty of the senseless of combat. Before he entered the service, Marc’s art had taken an almost Cubist turn in works such as The Fox (above, from 1913). The sly, red fox seems to almost hide within the shard-like pattern of Cubist planes Marc constructs around him. The fox manages to poke a recognizable nose out from the jumble, almost taunting us to track him down in the Cubist jumble. Despite his record of service in World War I, Marc found himself on the Nazi’s list of “Degenerate Art” in 1937. Perhaps the Nazis found the eyes of Marc’s menagerie accusatory, challenging them to ask who was really acting like an “animal.” Throughout 2008, I had many people look at my Marc calendar and wonder who did such works. Perhaps in the near future people won’t have to ask that question.

Glad to see someone else pay attention to Marc, my favourite painter.

Thank you for this post, Bob. Franz Marc and the Blue Rider made a strong impact on me at the time (2001 exhibition at the Walker.) Your post brought those images back and taught me more about them.