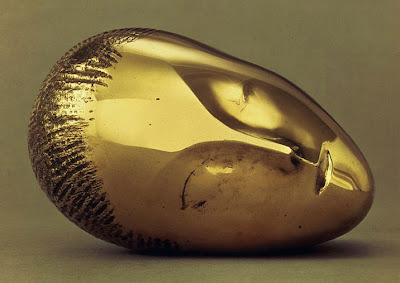 How must have Constantin Brancusi felt surrounded by artists and thinkers such as Marcel Duchamp, , Ezra Pound, Pablo Picasso, Guillaume Apollinaire, Henri Rousseau, and others all crying out for art to return to basics—namely the primal forces and simplicity they saw in African culture and other cultures they saw as untainted by Western civilization. Born February 19, 1876 in Romania, Brancusi lived the primal connection that these artists tried to assume through the hijacking of other cultures. Growing up in the Carpathian Mountains of Romania, Brancusi never forgot the native crafts and music of his homeland. Surrounded by Parisian Afro-philes, however, Brancusi couldn’t help but marry some of that cultural dialect with his own art in such works as The Sleeping Muse (above, from 1910). Looking at that work now, I can’t help but think of Man Ray’s 1926 photograph titled Black and White. Ray has his model hold an African mask to generate a comparison and contrast between the two “faces,” but Brancusi allows his face to stand alone. A nomad of sorts, Brancusi found himself at home with all cultures—first distilling them to their essentials and then binding them to his own.

After World War I, the Romanian government approached Brancusi to sculpt a tribute to those Romanians who had died fighting the Germans. The Endless Column (version 1 appears above, from 1918) finally rose in 1938, just as the next world war loomed on the horizon. Amazingly, The Endless Column lived up to its name and survived both the second World War and years of Communist rule continually threatening to take it down and erase its populist message. Unlike the Egyptian obelisks that celebrated the names of the powerful, Brancusi’s Endless Column celebrates the nameless dead who might otherwise be forgotten. Brancusi built the column out of a series of rhombus-shaped modules, giving the illusion of movement, as if some force were being pumped from the earth into the sky. Perhaps Brancusi, a spiritual man, imagined the life force of the slain Romanians rising from the grave through his column and ascending to the afterlife, maybe even to oversee and protect future generations of Romanians. 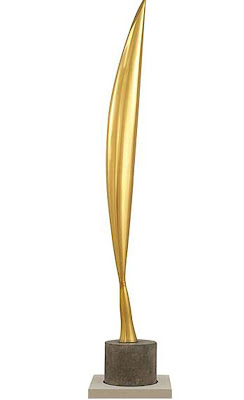 The PMA boasts one of the largest and finest collections of Brancusi’s sculpture in the world, including a copy of Brancusi’s famous Bird in Space (above, from 1923). Anne d'Harnoncourt, the PMA’s late director, loved Brancusi and took a personal interest in the development of the collection. Many press photos of Anne show her sitting in that gallery with Brancusi’s works peeking over her shoulder. The common misperception of Brancusi’s work usually comes from someone looking at a work such as Bird in Space and asking “Where’s the bird?” or thinking, “I could do that.” Brancusi’s art is more about spirit and thought than about subject matter and execution. Yes, the bird isn’t there. Yes, you could do that. But no, the bird is there in its simplest sense of a flight, more real than if you could see feathers and wings. And, no, you couldn’t do that, or at least not until Brancusi showed you the way how.