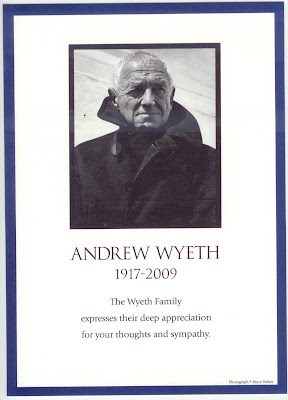 On Saturday, January 24th, the Brandywine River Museum and the Wyeth family celebrated with the public the life and art of Andrew Wyeth. (The memorial card distributed to visitors with thanks from the Wyeth family appears above.) Free admission and the first ever showing of Christina's World in Wyeth’s Chadds Ford were only two of the drawing cards. The biggest draw, however, remained the chance to join together and remember a man of the community. It’s so rare today that an artist becomes so closely identified with a region that Wyeth may be the last major American artist who could garner such an outpouring of affection. It was truly awesome to see. Annie, Alex, and I drove down expecting a crowd, but nothing like the long line of cars waiting just to get into the packed parking lots of the museum. We met friends Michele and Dave at the museum and got in line to walk through the Andrew Wyeth galleries, which snaked down from the third floor to the second. 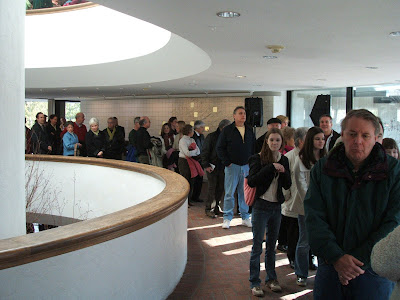 As we wound our way closer to the gallery, we watched people write in the many memorial books. “Profile of Andrew Wyeth,” an organ piece written by Andy’s sister Ann, rumbled over the loudspeakers, giving the procession a momentary funereal feel. The spirit of fun that was Andy Wyeth, however, eventually took over and people began to recall stories and search the crowds for famous faces from the paintings. The Brandywine River rolled past below, carrying sheets of melting ice past. The broad windows of the Brandywine River Museum gave a great opportunity to wonder at the land that inspired Andy his entire 91 years in this world. It was as if nature itself staged a snowfall and melt just to pay tribute, too. 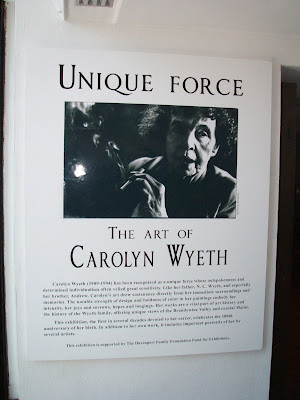 Just before reaching the steps to the third floor, we could see into the space for the Unique Force exhibition of Carolyn Wyeth’s art. (The entrance appears above.) Sadly, once again, Carolyn seems doomed to be overshadowed by her younger brother. I didn’t have time to look for more than a few minutes through that exhibition, but that was enough to want to come back and give her more attention. The line then worked its way through the N.C. Wyeth galleries, reminding us of how Andy got his start in art as well as just how different a path he took from his father’s. It was fascinating to see the portrait of the 12-year-old Andy sitting in the corner of N.C.’s In a Dream I Met George Washington. (Go here and enlarge the image to see the young, blond Andy.) Later on, I saw a portrait by Andy’s older sister Henriette Wyeth Hurd of the 21-year-old Andy standing proudly beside one of the startlingly colorful watercolors with which he made his first splash in the art world in 1938. It occurred to me that the Brandywine River Museum could easily work with the Wyeth family to assemble a series of portraits of Andy that would span most of his nine decades of life. That would truly be something to see. 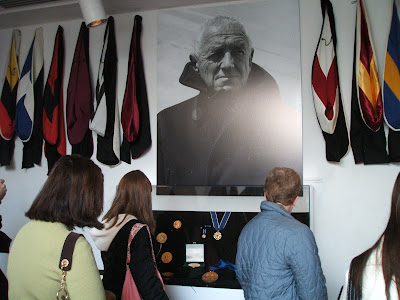 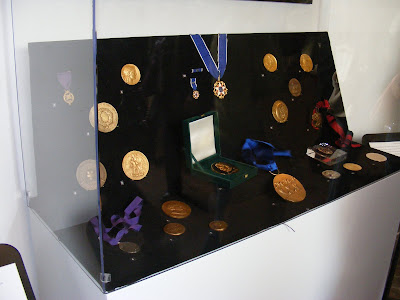 Right before entering the Andrew Wyeth galleries, we saw displays of the many medals and honorary degrees Wyeth received over the years (above). Andy would certainly have hated such a display, but it was just a glimpse of the long-standing impact he had on American art and culture reaching all the way back to the 1940s. Once inside the gallery, we, of course, looked at Christina’s World, but the many other familiar works called to us one by one, stirring up all the old stories to be repeated once more. But it was one unfamiliar work that drew the most attention—Wyeth’s final painting, titled presciently Goodbye. A large tempera, Goodbye shows a white house, most likely in Maine, reflected in water running alongside. A small boat slips quietly out of the picture frame on the left. The technique is, of course, amazing. The subject matter and title, however, simply knocked you off your feet. It was as if Andy said goodbye to each one of us personally, rewarding us for taking the time to look and understand when so many others had failed to, especially in these final years. 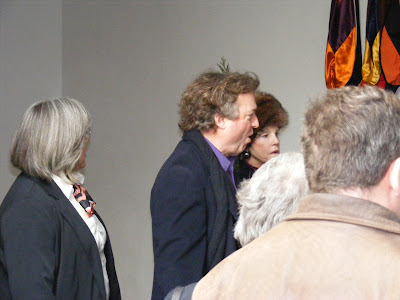 Just before we entered the Andrew Wyeth gallery, we spotted Jamie Wyeth (above) and his wife, Phyllis, enter the gallery through a special entrance. They stopped first to look at the display of medals and degrees, as if they had never seen them all in one place before either, before disappearing into the private offices of the museum. For a family as fiercely private as the Wyeths, Saturday’s special celebration must have been a difficult decision, but one I’m sure they do not regret. For all the critics who dismiss Andrew Wyeth’s art out of prejudice, ignorance, or a combination of the two, you cannot deny the power of the people to vote with their feet and elect Andy as one of the greatest painters America has ever produced. I thank the Wyeth family and the Brandywine River Museum for allowing those of us who could attend the chance to express our affection publicly and pay our heartfelt respects.

[Many thanks to Dave for sharing his photos of the medal display case and Jamie Wyeth that appear above.]

[BONUS CELEBRITY SIGHTING: While waiting in line, Annie and Alex walked over to a bench for a rest. Alex sat beside a young boy about his age. That young boy’s mother asked Alex for his name, to which Alex characteristically responded with his full name, including his middle name “Robert.” “That’s Luke’s middle name, too—Luke Robert Watson,” she responded. Annie talked with the other mother, not realizing, as Michele, Dave, and I did, that it was local TV news personality Cecily Tynan. When Annie and Alex rejoined us, we told Annie who she was speaking with, to her amusement. If you’re out there reading, Cecily, I hope you and Luke enjoyed the show, too.]
Posted by Bob at 6:50 PM

What a wonderful experience.
How fortunate you could participate.

What is this Wyethmania? Let's be sensible. The Brandywine "mystique" (read "schtick"), for the Wyeths, just like the Camelot "mystique" for the Kennedys. Do you know that the marketing slick who produced the Camelot front for the Kennedys is the same guy who trumped up "Hope and Change" for the Obama fraud? Ted Sorenson. Sell it, baby! But I digress, or do I?

Anyway, somebody let me know when they want to wake up out of all of that sentimental fog and get real about the Wyeth deal and we'll give ol' Andy a fair treatment against a backdrop of the heritage of the art of painting.

The rest of you, don't kill the messenger, please.