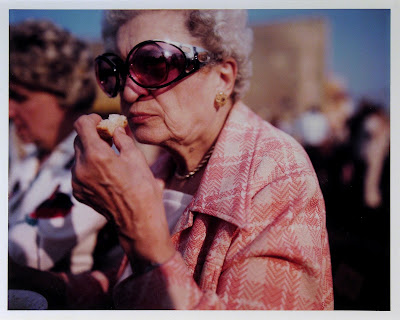 At just around five feet in height, Barbara Crane has a height advantage over most other photographers. Crane makes herself inconspicuous and captures people at their most vulnerable, unguarded, and real moments, such as in Eaters (above, from 1981). The Amon Carter Museum’s current exhibition Barbara Crane: Challenging Vision displays this period of Crane’s long, protean career as well as many others. The catalogue, which features an introduction by Kenneth C. Burkhart and essays by John Rohrbach and Abigail Foerstner, brings Crane into clear focus not only as a visionary photographer but also as a groundbreaking woman photographer breaking into the boys club of modern photography while raising three children, who actually posed for her as her thesis subjects for 35 cents an hour. “It took me years—really years, way into adulthood to say I was an artist,” Crane confesses. In 1970, Crane began a two-year project of photographing people passing through a doorway, which became the series known as People of the North Portal. “Brought together, the images deliver a vivid sense of place and activity,” Rohrbach writes in his essay, “Seeing Life Differently,” “the repetitious dance of life walking out of a public doorway and into the street, given a nostalgic twist through hairstyle and clothing.” Crane’s still photography captures the movement and vitality of life with all its change and randomness. Crane herself has never stopped moving artistically over five decades of creating. 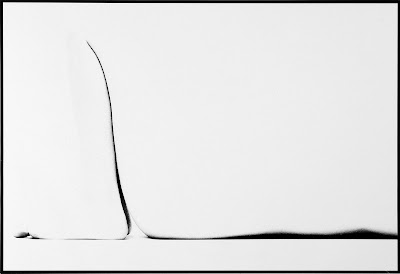 Crane’s Human Forms series (above, from 1964-1965) shows the influence of Edward Weston’s nudes but also just how different Crane’s approach to photography evolved from the work of Weston and others. Weston skirted the edges of abstraction with his nudes, but they always remained recognizably human. Crane, contrastingly, pushes the recognizable to the point of abstraction to make us see it anew. “Crane’s goal,” Rohrbach believes, “has been to critique our subservience to photographic realism and to suggest that we have fallen into a bad habit of giving undue preference to that part of photography’s magical language.” Writing specifically of Crane’s nude studies, Rohrbach writes that “[e]ach body almost dissolves, becoming a sinuous river flowing across a snowy landscape.” The gentle lyricism and natural sense of flow of Crane’s nudes departs drastically from Weston’s almost sculptural, static nudes. Such works beautifully capture the philosophical difference between Crane’s “challenging vision” and the vision of her contemporaries. Crane achieves what Rohrbach calls an “unnerving disconnect” that breaks old associations and forces us to reconnect with what we see before us. 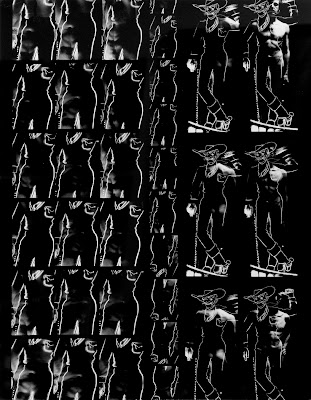 Crane jumps from subject to subject throughout her career, always seeking something new to cast askew and make new. In a series of collaged photographs involving neon lights, Crane “juxtapos[es] neon lights over faces like ceremonial urban masks,” writes Foerstner in her essay, “On the Path to the Perfect Photograph.” In Neon Cowboy (above, from 1969), Crane superimposes a grid of neon cowboy signs over a series of male nudes. Rohrbach connects Crane’s use of series to the influence of John Cage’s music celebrating the artistic potential of chance. Although the neon sign does not move, the male model beneath does, sometimes wearing the neon like a mask and sometimes pulling away, revealing the hollow “mask-ness” of the sign. Rohrbach also makes a fascinating connection between Crane and the philosopher- semiotician Roland Barthes. Contrasting Crane with Lee Friedlander, who sees photography as seeing rather than making, Rohrbach calls Crane “a linguist at heart, in love with photographs as signs rather than signifiers.” Such philosophical depth adds a whole new dimension to what seem to be Crane’s simple pictures of people, buildings, neon signs, etc. “Crane taps the everyday world for the tumultuous undercurrents of unifying themes: chance, accident, chaos, contradiction and mystery playing out before our eyes,” Foerstner concurs.
Barbara Crane (b. 1928). Coloma to Covert: Fleshy Fungi, 1990. Courtesy of the Chicago Cultural Center. © Barbara Crane, 1990.

After years of photographing the urban landscape and its inhabitants, Crane went “back to nature” in the 1990s with her Coloma to Covert series. Crane brings her “unnerving disconnect” to such subjects as mushrooms in Fleshy Fungi (above, from 1990), rendering them more alien than earthly. Stretching her images into panoramic scrolls, diptychs, and triptychs, Crane not only mimics the Chinese scroll in style but in substance. “The images recall the pared-down vocabulary of haiku poetry,” Rohrbach writes. “Crane’s world may be alien, but it is remarkably inviting.” In other photographs consisting mainly of out-of-focus leaves, Crane makes “[t]he eye, desperate to find a foothold, fall ever deeper into the chasm of crystal-sharp trees beyond,” writes Foerstner. Whereas someone such as Ansel Adams, a friend of Crane’s, used mountains to speak of infinity, Crane uses the minutiae of nature to open up a universe. Flipping through the 265 beautifully reproduced plates of the catalogue, you get a true sense both of the versatility of Barbara Crane as she shifts from subject to subject and of her unchanging faith in what Burkhart calls in his introduction, “the serendipity of happenstance.” 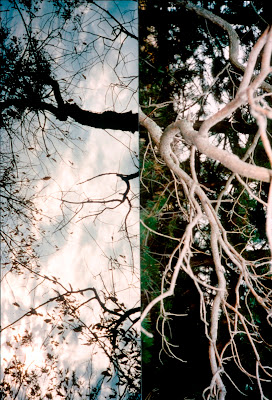 The Amon Carter Museum’s exhibition and catalogue may help win a place for Barbara Crane and her art in the hearts of the mainstream public. Crane’s art is both uniquely accessible while remaining uncompromisingly modern in its theoretical underpinnings. Crane continues to expand her repertoire by embracing the latest innovations in digital photography and computerized manipulations. Perhaps more than ever, the reality Crane photographs will find itself remolded in her spiritual likeness. Crane’s story is more than just a feminist success story, but it is certainly that as well. Faced with the reality of a male-dominated, realist-centered medium, Barbara Crane changed the rules of the game and continues to ask us to play along.


[Many thanks to the Amon Carter Museum for providing me with a review copy of Barbara Crane: Challenging Vision, with an introduction by Kenneth C. Burkhart and essays by John Rohrbach and Abigail Foerstner, and for the images above from the exhibition.]
Posted by Bob at 12:01 AM

Hey, I like your blog information, keep up the good posting! But don't you consider default blogger.com themes boring? Well, I have little advice for you, check out WebToolGallery.com for free custom blogger templates. :)