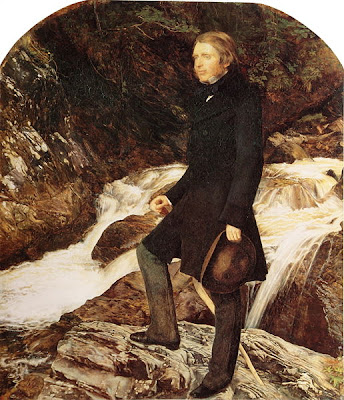 Few critics wielded as much power for so long as John Ruskin, shown above in the highly flattering 1853-1854 portrait by John Everett Millais amidst the natural world Ruskin loved and studied so deeply. Born February 8, 1819, set the standards for artistic taste for both the Victorian and Edwardian ages, championing J.M.W. Turner in the 1840s and getting into a famous legal scrap with James McNeill Whistler in the late 1870s. An autodidact Renaissance man who dabbled in poetry and art himself in addition to criticism on the arts and social conditions, Ruskin today seems just another odd figure in the pantheon of odd figures that come down to us from the repressive Victorian times. As Millais painted the scenery behind Ruskin in this portrait, Millais fell in love with Ruskin’s young wife, Effie Gray. eventually marrying her after helping her annul her marriage to Ruskin on the grounds of “incurable impotency.” Ruskin disputed the charge of impotency, but he certainly couldn’t dispute the charge of incurable seriousness. As hard as I try, I just can’t imagine Ruskin ever laughing, even as a child. Ruskin’s dryness is that of the late Wordsworth, Ruskin’s early poetic hero, who became staid and sclerotic when the radical flow of ideas ceased. Unfortunately, Ruskin was never a radical, even in his youth.
Ruskin took up the cause of Turner when critics began to question Turner’s importance. Ruskin even sent a fan letter to Turner asking the artist’s permission to defend his name, but Turner gently tried to dissuade Ruskin, to no avail. Ruskin’s greatest work of criticism, Modern Painters, amounts to a long defense of Turner as the greatest artist ever. It’s a long trudge to get through, but I remember coming away from Modern Painters with a whole new appreciation of the natural world. Ruskin looked longer and harder at natural phenomenon than perhaps even Turner himself, as drawings by Ruskin such as his Study of Gneiss Rock, Glenfinlas (above, from 1853) attest. Sadly, the revolutionary naturalism of Turner was as revolutionary as Ruskin was willing to go. The late, visionary works of Turner dismayed and saddened Ruskin to the point that Ruskin barely acknowledges them at all. The modern idea of Turner as the precursor of Impressionism and all modern art would give Ruskin a fainting spell were he alive today. After Turner’s death, Ruskin took on the task of classifying Turner’s work, thus setting the tone for all Turner studies for decades. Coming across erotic works by Turner, Ruskin fought the urge to destroy them and preserve his vision of Turner as a morally upright man and artist. Although sorely tempted, Ruskin didn’t burn the erotic Turners, although he told others that he did, but he did bury them so deeply in the archives that they weren’t found for almost 150 years.

When you add up the ledger of Ruskin’s good deeds versus his bad deeds, I still think the positives come out ahead. Ruskin’s fidelity to Turner’s genius and his fostering of the Pre-Raphaelite Brotherhood helped promote those artists to a wider audience that they might never have found, even today. Like Giorgio Vasari before him and Bernard Berenson after him, Ruskin waded into the vast sea of centuries of Italian art and salvaged many names lost to memory. Ruskin haunted the untraveled paths of Italy and ventured into near-forgotten churches to rediscover and copy for his own use works such as Carpaccio’s Saint George and the Dragon (Ruskin’s copy above, from 1870-1872). Unfortunately, Ruskin couldn’t resist making forceful statements that cost some artists and schools dearly, such as the Bolognese Baroque School of Ludovico Carracci, Annibale Carracci, Guido Reni, and others. Ruskin condemned the emotionalism of the Bolognese Baroque as false and untrue and, therefore, unworthy of study, effectively burying those artists for nearly a century under the weight of his powerful opinion. I find it highly ironic that such an unemotional man could sum up the nerve to question the emotions of others, but Ruskin never considered the consequences of his critical actions. It is this strange mix of affinity for nature yet lack of human empathy that makes Ruskin such a unique figure in art history, one more at home with rocks and frescoes than with the flesh and blood people who make and enjoy art.
Posted by Bob at 12:01 AM

On display at the Italian Cultural Institute of New York February 3 to March 2, 2009