Change We Can Believe In 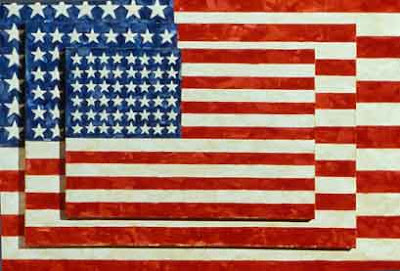 In just another of the many signs of the radical changing of the guard with the Presidency of Barack Obama comes news that the First Couple will be decorating their private living space with modern art by masters such as Ed Ruscha, Robert Rauschenberg, and Jasper Johns (whose Three Flags, from 1958, appears above). Interior designer Michael Smith is asking museums across the country to suggest works from their modern and contemporary art collections that they’d be willing to loan to the Obamas. After the previous 8 years of anti-intellectualism, anti-modernism, and anti-Americanism, it will be nice to know that the work of living, breathing artists will grace the walls of the leader of the free world and inspire him to new heights. Perhaps this signals a new embrace of culture and the arts by our government, even at this time of financial crisis. At the very least, I doubt Obama will request any art just because he thinks the guy looks like him.
Posted by Bob at 5:41 PM

anti-intellectualism? anti-modernism? Those the modern artists are also great artists but a lot of their works lack "depth" like most thing modern!