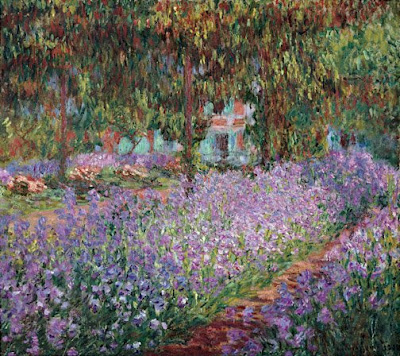 The story of Nils Büttner’s The History of Gardens in Painting is essentially the story of the garden in human history itself—a wish to return to paradise physically, spiritually, or both. Using the usual Abbeville Press style of lavish illustration, Büttner works his way through the beginnings of art history to the present day, hitting upon the usual suspects such as Claude Monet and the Impressionists (above, Monet’s Iris Bed in Monet’s Garden, from 1900) but also calling forth artists less well known for their natural touch, bringing both those artists and their periods into fresh perspective. Büttner’s text strikes at the heart of the human fascination with green oases and how the philosophy underpinning that fascination has changed in tandem with Western civilization’s evolving relationship with the earth. “[E]ven illustrations of actual gardens intended as topographical records are often echoes of human hopes or longings or projections of symbolic meanings,” Büttner writes. From the ancient Romans to the most modern of modern artists, the garden has held a unique place in the creative mind of mankind and reflected many of the central concerns of each age.

Büttner begins with the Romans and “the ideal of the Roman villa, which over time had come to epitomize otium, that exquisite calm, far from the hectic bustle of city life, universally considered necessary for any kind of intellectual activity.” The Romans actually borrowed this garden ideal from the Greeks and Egyptians, from whom they borrowed almost everything else. When living gardens were impractical, painted ones sufficed. A garden landscape of the Villa of Livia (above) created a grotto-like effect in a windowless, underground room. Büttner easily transitions from this Roman contemplative use of the painted garden to the religious contemplative use of the early Christians, who linked Christ with the lost paradise of Eden. Without getting bogged down in detail, Büttner explains how flower symbolism developed around figures such as Christ and the Virgin Mary into a full-grown visual garden of salvation for believers. Büttner shows how even the garden of courtly love, a parallel development to the Christian painted garden, bought into the idea of garden as the means of salvation. “Nothing that conflicts with the ethic of courtly love is admitted into the garden,” Büttner writes, “wickedness, hate, greed, envy, and miserliness are banished from it as surely as are old age and poverty.” Sacred and profane love follow the same program of green power. 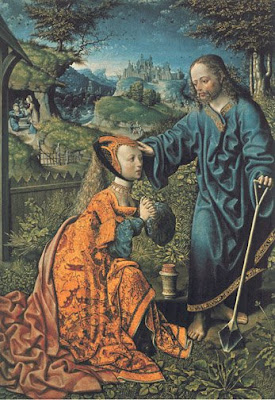 When Büttner reaches the Renaissance and Baroque periods, we truly get a sense of how the garden became an ideological battleground in art. In addition to presenting familiar names such as Fra Angelico, Botticelli, and Andrea Mantegna, Büttner pulls out fascinating artists from the shadows of art history such as Jacob Cornelisz van Oostsanen. Van Oostanen’s Christ as Gardener (above, from 1507) depicts Christ as literally a gardener, with spade in hand, but “the garden here tended by Christ,” Büttner writes, “is to be perceived topologically as a symbol of the human soul.” Diving deep into the vast seas of religious images of these periods, Büttner always manages to resurface with a precisely apt picture to get his point across. Similarly, Lucas Cranach the Younger’s 1569 painting The Lord’s Vinyard shows a figure tending the garden of the human soul, but Martin Luther rather than Christ, who has been betrayed by the poor stewards of the Catholic church, according to the Reformation. The ancient Roman’s idea of the garden as philosophical facilitator gives way to a free-for-all atmosphere in such works in which the physical garden itself is reduced to nothing but a stage prop for propaganda. 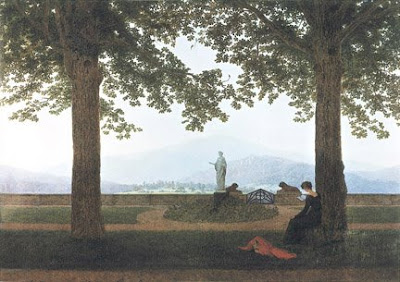 As the power of the church began to fade and secular power took command, the garden as ideological battleground changed from a spiritual landscape to a landscape of social and political standing. Kings began to surround their palaces with elaborately structured gardens, such as the Gardens of Versailles. “Both the elaborate garden structures and the floral splendor displayed were luxuries reserved for the upper classes,” Büttner explains, “and thus clear evidence of social distinction.” When Rubens paints his self-portrait titled Peter Paul Rubens with Helene Fourment and Nicolas Rubens in the Garden in 1630, he shows himself as the owner of an elaborate garden to flash his “credentials” as a member of the elites in one single image. Romantic artists such as Caspar David Friedrich resisted Rubens identification. In The Garden Terrace (above, from 1811-1812), Friedrich shows a seemingly simple image of a young woman reading in the garden. However, Büttner deconstructs this painting to show how Friedrich disdains the young woman reading and ignoring the natural beauty around her, preferring instead the sublime wilderness beyond. “Perceived as the symbol of rationalism, the French garden is here contrasted with religious faith, a specifically German virtue,” Büttner explains. Suddenly, a garden scene not only depicts a philosophical distinction but also a nationalistic one, concisely capturing the convoluted web of ideas that underlie much of the garden imagery of the early nineteenth century before the Impressionists. 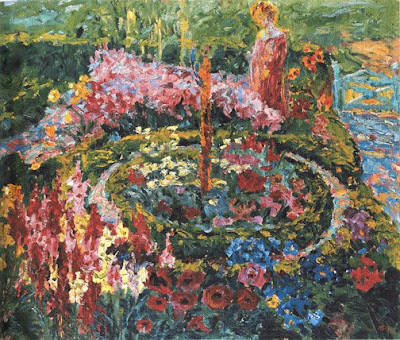 When the Impressionists and post-Impressionists arrive on the scene, Büttner’s narrative picks up speed and falls in line with the standard story of modern art. “The pure artistry in Monet’s pictures and those of the Impressionists developed a dynamic of its own,” Büttner writes, “one that caused objectivity to retreat into the background in favor of a total focus on artistic subjectivity.” Van Gogh takes this a step further and, in Büttner’s eyes, helps originate “the notion, commonly held to this day, that the artist as a creative subject, working for himself without commissions, adds new images to the reality of his time that must be engaged.” Later, German Expressionists such as Emil Nolde engage artistically with Van Gogh’s work in paintings such as Nolde’s Trolhoi’s Garden (above, from 1907). Büttner’s text helps restore the centrality of the garden and nature itself in the evolution of modern art—specifically as the origin of the vibrant colors that inspired the Impressionists and every movement on down to the Abstract Expressionists. Taking examples from artists not normally associated with garden scenes, such as Gustav Klimt and Edvard Munch, Büttner proves that the garden motif belonged not just to nature lovers but also to anyone addressing the course of modern art. 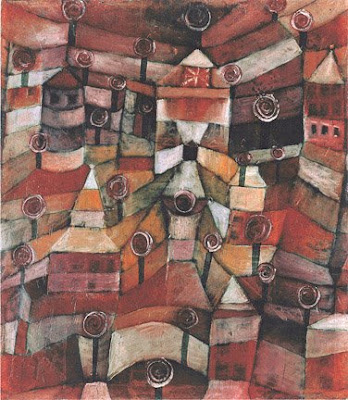 Paul Klee believed that the artist must hold “conversations with nature.” Klee’s Rose Garden (above, from 1920) is just one example of the many wonderful individual conversations within the larger dialogue of Western art with the idea of the garden found in Nils Büttner’s The History of Gardens in Painting. The garden may seem absent from the world of contemporary art, but Büttner believes that “[t]he garden painting fell into disrepute only when it degenerated into kitsch,” citing Bob Ross’ “happy little trees” and Thomas Kinkade’s sappy cottage gardens. Today’s focus on ecology will help reenergize the garden as a fruitful site of artistic exploration. If I have one complaint with Büttner’s text it is his laser-like focus on Western art to the exclusion of other traditions. A complete world history would be a tall order, but some inclusion of the garden in Chinese history (Craig Clunas’ Fruitful Sites: Garden Culture in Ming Dynasty China would be a great source) or the influence of Japanese garden painting on the West via Japonisme, a huge factor in the development of Van Gogh and others, would certainly add another dimension to Büttner’s argument. However, The History of Gardens in Painting remains a valuable compendium of how artists have lost themselves in gardens over time in the never-ending pursuit of paradise.

[Many thanks to Abbeville Press for providing me with a review copy of Nils Büttner’s The History of Gardens in Painting and for the images from the book shown above.]

Yesterday, I was going through some modern designs on Modern Art and I found amazing collection.

Wow, that Van Oostanen painting is a thing of beauty.

Many thanks for the review! Our secret favorite among the images you picked is the Klee. Not the world's most relaxing garden, but certainly one of the most fantastical.