Amedeo Modigliani, whose first name means “beloved of God,” entered this world on this date in 1884. More than perhaps any other modern artist in the early twentieth century, Modigliani adopted the style of African art and reshaped that “primitivism” into his own artistic idiom. His sculpture Head (above) seems like something straight out of African art. In his short thirty-five years of life, Modigliani crammed in more than enough living and loving for a dozen artists. 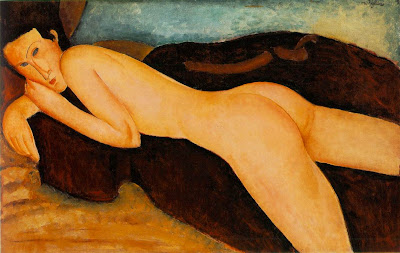 Modigliani’s nudes and other sensual works often seem to be the work of a man trying to make up for lost time or a man knowing his time is short. For Modigliani, both were true. After suffering through a series of childhood illnesses, Modigliani feared that he would die as a 14-year-old before seeing the great Italian masters’ paintings in Florence, Italy. When he survived, his mother took him to see Florence and his life in art was born. As an adult, Modigliani moved to the Montmartre section of Paris to live La Vie Boheme with the other impoverished artists, smoke hashish, and drink absinthe, all of which, added to his tuberculosis, contributed to his early demise. The nickname other painters used for Modigliani—“Modi”—also was a pun for the French “maudit,” which means “accursed.” Combined this pun with the meaning of his first name, Amedeo Modgiliani was literally blessed and accursed. 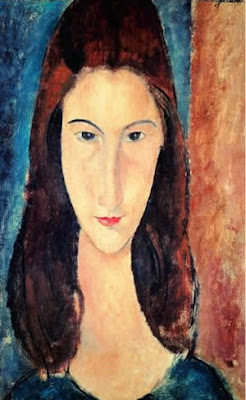 Modigliani met Jeanne Hebuterne, a young art student, in 1917. (Portraits of Jeanne by Modigliani appear above and below.) Within a year, she bore his child, also named Jeanne. By all reports, their relationship was passionate and violent, due in part to her family’s objections to their relationship and their continued poverty. Modigliani finally succumbed to his tuberculosis on January 24, 1920. Jeanne, nine months pregnant with their second child, leapt from a window two days later, killing herself and their unborn child. The story of Modigliani ranks second only to Van Gogh’s in terms of drama and pathos in the annals of art history.

Of course, such a story couldn’t possibly be enough for Hollywood. The 2004 movie titled simply Modigliani, starring Andy Garcia in the title role, does the typical Hollywood hatchet job on Modigliani’s legend, inserting some absurd painting contest and even rewriting the details of how Modigliani actually dies. Taking liberties with the basic story is standard operating procedure in filmmaking, but Modigliani takes it way too far. Modigliani deserves far better. I always remember the scene in 1987’s The Pick-up Artist where Robert Downey, Jr. practices his come-ons in a mirror and says “Did anyone ever tell you that you have the face of a Botticelli and the body of a Degas?” I always thought that he should have added, “and the neck of a Modigliani…”