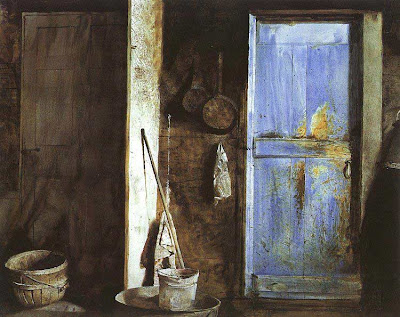 While I was reviewing the catalogue to The Mirror and the Mask: Portraiture in the Age of Picasso, I couldn’t help but think of the lost boy of modern art and modern portraiture—Andrew Wyeth, who celebrated his 90th birthday on July 12th. Cursed by popularity, Wyeth suffers under critical exile from the modernist cannon. One of the most jarring moments I’ve ever had in a museum was at the MOMA when I turned away from their selection of Jackson Pollock's drip paintings and came face to face with Christina’s World, Wyeth’s most enduring image and a contemporary of those Abstract Expressionist paintings. That juxtaposition forced me to realize that paintings by Wyeth such as Alvaro and Christina (above) (Wyeth’s elegy for Christina Olson, the subject of Christina’s World, and her brother Alvaro) belong as much in the modern cannon as any other. Wyeth’s puckish humor and Peter Pan-like nature make him, even after nine decades, seem like one of the “Lost Boys,” but his exclusion from the histories of modern art make him truly the lost man of modernism.

The Mirror and the Mask brought to the forefront of my attention the issues of representation and misrepresentation in modern art. Despite his dedication to realism and his archaic tempera painting medium, Wyeth plays with these issues as much as anyone. In Alvaro and Christina, Wyeth uses the images of two doors to symbolize their closed existences, both before and after their deaths. Doors play a big role in the personal mythology of Wyeth’s world, offering openings into new possibility as well as lost opportunities. An equally symbolic portrait missing the physical presence of the ostensible subject is Groundhog Day (above). Here, Wyeth portrays Karl Kuerner, the German farmer and World War I veteran who was his neighbor in Chadds Ford, Pennsylvania. Whereas Alvaro and Christina’s worlds are closed, as symbolized by the closed door, here Kuerner’s world is revealed through the transparent window. Outside the window we see the end of a log, its jagged, teeth-like end threatening in a wolf-like way, symbolizing Kuerner’s violent past. (The PMA’s Andrew Wyeth: Memory and Magic exhibit and catalogue marvelously documented the evolution of Wyeth’s drawings of an actual wolf dog into a wolf-like log.) The simple detail of a knife next the dish on the table with no fork, indicating that Kuerner ate only with a knife, further exposes the raw violence of the subject. Kuerner and his farm served as an endless source of fascination for Wyeth and are now part of the Wyeth “experience” offered by the Brandywine River Museum. 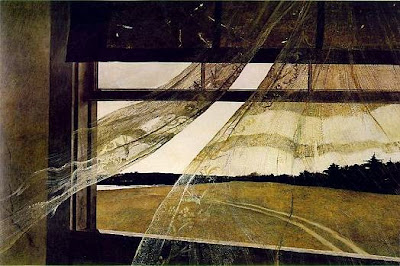 Finally, I’d like to just marvel with you for a moment over the sheer ability of Andrew Wyeth. In Wind from the Sea (above), Wyeth depicts a ragged lace curtain dancing in the wind. Wyeth says that the window in the painting hadn’t been opened for years. When he opened it, he found his subject. Wyeth continues to paint with exquisite detail in the demanding medium of tempera even at the age of 90. At the press preview for the William Ranney exhibit at the PMA, I spoke with someone who worked at the PMA and the Brandywine River Museum about Wyeth and his upcoming 90th birthday. We both marveled at his ability to still paint at such a high level. Wyeth has been painting at a high level since his first sold-out watercolor show in 1937 put him on the artistic map, over 70 years ago. As popular and lauded as Wyeth has been in his long life and career, I still can’t help but feel that true appreciation of his art won’t come until he himself has died. As much as I wish he could be around to experience that, I also believe that he also knows that his real time of acceptance is yet to come. So many photos of Wyeth over the years show him in the middle of his famous high-pitched laugh. I can’t help but picture him laughing last over the critics.
Posted by Bob at 6:08 AM

I never appreciated Wyeth until I saw his work in person at the Brandywine Museum. There is a presence and luninosity as well as the scale that is not communicated in reproductions. I agree that he will be appreciated after his death.

By the way I think you have a typo when you talk about Kuerner only eating with a knife. The second knife reference should be "fork".

I am enjoying your blog and look forward to reading it. Keep up the good work.

The Brandywine is really the place to see Wyeth. You can actually drive on the way there near Wyeth's home and see it from the road.

Thanks for pointing out the typo, too.