Conquest of the Philosopher 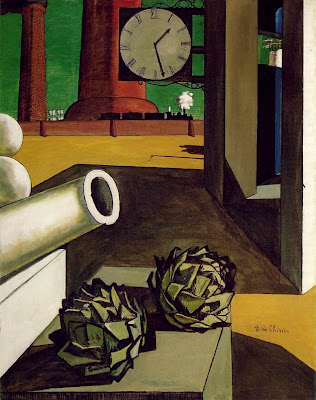 Founder of the Scuola Metafisica or metaphysical school of art, Giorgio de Chirico was born on this date, July 10th, in 1888. de Chirico read Nietzsche and Schopenhauer in his youth and translated those philosophical musings into works such as The Conquest of the Philosopher (above). In the unpopulated, dreamlike cityscapes of de Chirico’s finest work we see the beginnings of Surrealism.

Later Surrealists such as Salvador Dali, Max Ernst, and Rene Magritte all pointed to de Chirico as an influence. Like his Nostalgia for the Infinite (above), the Greek-Italian de Chirico towered over all the other proto-Surrealists and really shaped the metaphysical, philosophical, and absurdist flavor of that school. de Chirico’s flair for great titles also influenced his Surrealist descendants. I’ve always thought that half of the appeal of de Chirico’s art rested in the titles themselves. 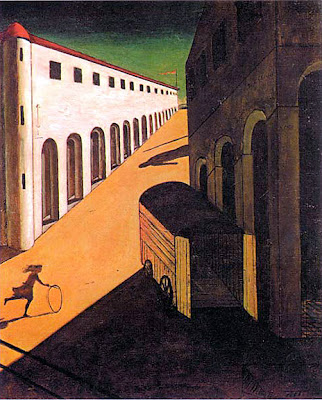 The Italian filmmaker Michelangelo Antonioni modeled much of his film style after de Chirico’s paintings. Antonioni had many de Chirico-esque landscapes to choose from amidst the devestation of post-World War II Europe. In that respect, de Chirico seems almost prophetic, “seeing” the post-apocalyptic landscape of wreck and ruin decades before it became a reality. Antonioni almost captures the same sense of mystery and menace in films such as L’aventurra, in which a couple searches for a lost friend on a weirdly unpopulated island and eventually lose their way and forget their quest. de Chirico style translated so well to film that you could say that he and all the other Surrealists fathered the postwar art house film style in Italy and many other European countries. de Chirico’s work is the stuff of Fellini-esque dreams, decades before Fellini even dreamt them.
Posted by Bob at 6:13 AM

That pretty much reminds of of my days in school and all the art lessons... I could be wrong but I think I can remember analyzing one of those paintings...

The correct spelling of the Antonioni's film is L'avventura