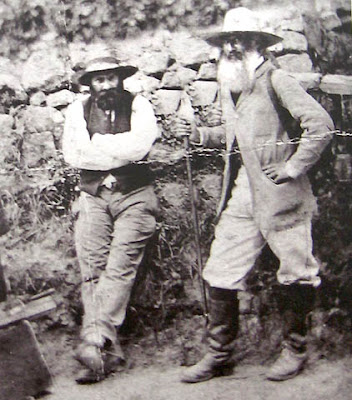 When I saw the Pioneering Modern Painting: Cezanne and Pissarro 1865-1885 exhibit at the MOMA in 2005, I came away with a greater understanding of Paul Cezanne, whom I already knew very well, but I also came away with a greater appreciation and affection for Camille Pissarro, born on July 10, 1830. (Cezanne [on the left] and Pissarro [on the right] appear above, heavily bearded and ready for some en plein air painting.) Pissarro’s great-grandson, Joachim, Head Curator of Drawing and Painting at the MOMA, curated that show, so you could accuse him of understandable bias, but I think that the gentleness and generosity of Pissarro, “the father of Impressionism” in the eyes of many, transcends any bias. 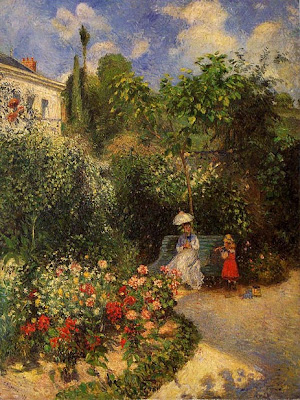 Born on the island of St. Thomas, Pissarro’s mixed lineage of Portuguese Sephardic Jew made him an outsider even among the outsiders of nineteenth century French art. After studying under Jean-Baptiste Camille Corot and Gustave Courbet, Pissarro himself painted in a realistic style that soon evolved into proto-Impressionism. In works such as The Garden at Pontoise (above), you can see the softness and gentleness as well as the master draftsmanship of Pissarro. Pissarro, in turn, became a mentor and friend to other artists, such as Cezanne, Paul Gauguin, and Edgar Degas. All of these artists spoke of Pissarro with respect and love in later years, even as their reputations soon eclipsed his. 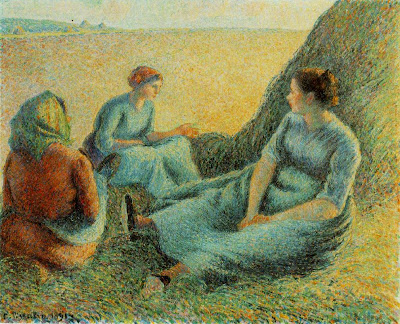 One of the great features of the MOMA exhibit in 2005 was the ability to see the same scene painted by Cezanne and Pissarro from different perspectives, as if you were there on that day, walking from one artist’s easel to the other, seeing the same world through two different, yet complimentary eyes. Few other artists convey to me this same warmth of community within the art world. The Romantic notion of the artist as individual rebel often conflicts with the reality of just how close a community these artists tried to forge. Van Gogh longed for a community of artists in Arles, failing to connect with Gauguin. Pissarro’s genius, however, allowed him to see the genius of others, even the cantankerous Cezanne, and embrace their differences and find common ground. In works such as Haymakers Resting (above), we see Pissarro toy with proto-Pointillism before giving that up and returning to more standard Impressionism. Such versatility of technique goes hand in hand with Pissarro’s versatility of spirit—his ego and artistic soul was large enough to encompass not only different styles but also different artists. Pissarro remains one of the many “minor” masters deserving of greater repute.

[BTW, The Jewish Museum in New York will feature an exhibit titled Camille Pissarro: Impressions of City and Country this September. ]
Posted by Bob at 5:50 AM

Love your blog, Bob. Thanks for the history lesson.

Thanks, Robert. And thanks for reading.

I couldn't agree more Bob. You echo thoughts I've had for many years. That's a lovely photo of PC and CP (I like the palindromic effect of that!). I recently lost my own Pissarro, Henry Israel - not well known because he was very self-effacing and lived in obscurity in North Cornwall. I would send a photo if I knew how on this!

My own Blog is poor compared to yours but that is partly because my time is consumed elsewhere - in the world of animal conservation (which I wish wasn't necessary). If you have a look at my website (www.richardmeyer.co.uk) sometime, you'll get a flavour of my interests.