The Rest He So Much Longed For 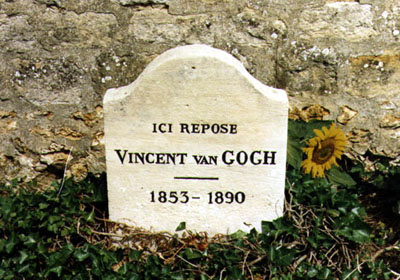 After shooting himself in the chest on July 27, 1890, Vincent Van Gogh lingered for two days and finally died on July 29th, his beloved brother Theo at his side. Theo buried Vincent the next day, July 30th. Vincent’s grave appears above.

On August 1st, Theo wrote to their mother:

One cannot write how sad one is, nor find solace in pouring out one's heart. May I come to you soon? I still have to make all sorts of arrangements here, but if it is possible, I would like to leave here on Sunday morning to be with you in the evening. It is a grief that will weigh on me for a long time and will certainly not leave my thoughts as long as I live, but if one should want to say anything about it, it is that he himself has found the rest he so much longed for. If he could have seen how people behaved toward me when he had left us and the sympathy of so many for himself, he would at this moment not have wanted to die. Today I received your letter and the one from Wil [Vincent and Theo’s sister], and I thank you both. I can better tell you everything than write. Dr. Gachet and the other doctor were exemplary and have looked after him well, but they realized from the first moment that there was nothing one could do. Vincent said "I would like to go like this," and half an hour later he had his wish. Life weighed so heavily upon him, but as happens so often everyone is now full of praise, also for his talent. Maybe it was fortunate that Jo [Theo’s wife] was not here, it would have been such a shock for her. May she also come once I am there? Later we will go to Amsterdam for a couple of days. Oh, Mother, I so much long to be with you. I suppose you will have written to Lies [a cousin of Vincent and Theo]. I can't do it at this time. Tomorrow I will only know for certain whether I can leave, and if I cannot come, I will let you know. Oh, Mother, he was so very much my own brother. 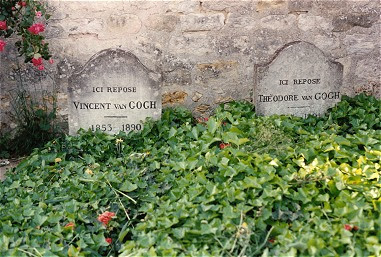 After Vincent’s death, Theo redoubled his efforts to get Vincent’s works exhibited. Finally, in September 1890, with the help of Vincent’s friend and fellow painter, Emile Bernard, the first, albeit small exhibit of Van Gogh’s work was staged. Theo’s health and mental state soon degenerated. He died in January 1891, just 6 months after his brother. Vincent’s works, which had been passed on to Theo, then passed on to Theo’s son, Vincent, named in his uncle’s honor. Theo’s wife, Jo, took on the task of furthering her husband and brother-in-law’s artistic vision. Jo is greatly responsible for the many exhibits of Van Gogh’s work in Germany, which sparked the mania for his work that continues today. Theo’s remains, which were originally buried in The Netherlands, were disinterred in 1914 and moved next to his beloved brother’s. Today they rest side by side, as close in death as they were in life.
Posted by Bob at 6:49 AM