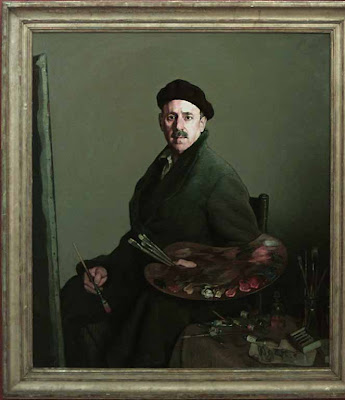 Ignacio Zuloaga y Zabaleta, born on this date in 1870, joined the old world of the Old Spanish Masters, such as Velazquez, Goya, and El Greco, and the new world of French Impressionism and Post-Impressionism to create his own unique style. Despite pulling this long caravan of influences behind him, Zuloaga never lost his individuality in his painting. His Self-Portrait from 1931 (above) pays homage to the clarity of Velazquez yet filters that influence through the modernist vision of Manet, himself a lover of Velazquez. By straddling these two different worlds, Zuloaga infused Spanish painting with new life. 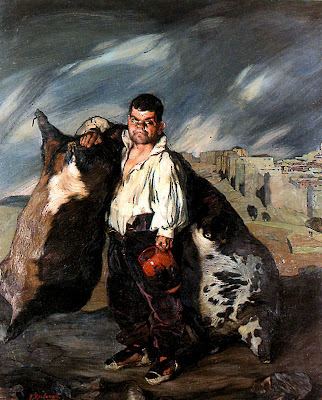 Gregor the Dwarf (above) shows Zuloaga’s debt to Goya, who depicted the grotesque as well as the beautiful. Zuloaga paints the misshapen figure of Gregor almost sculpturally, giving depth and personality to what could easily have been simply a freak show exhibit. In addition to sharing Goya’s taste for the unusual, Zuloaga also shared his taste for frank female nudes, paying homage to Goya’s “Maya” paintings with his own modern “Mayas.” Like Goya, Zuloaga depicted the true face of Spanish life, from the pageantry of the bullfight to the crushing poverty of the villages, but from a more modern perspective—years before Picasso himself began to include those subjects in his paintings. 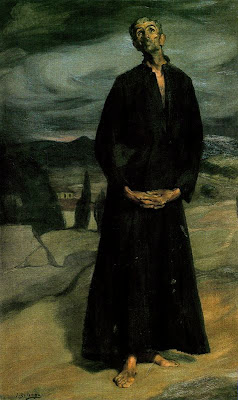 Zuloaga may be credited with helping resurrect the reputation of El Greco, first by encouraging others to purchase El Greco’s works and then by copying much of El Greco’s proto-Expressionist style. The Anchorite (above), could easily slip into a collection of El Greco paintings unnoticed. It’s amazing to think of just how versatile Zuloaga was—shuttling from the clarity of Velazquez to the earthiness of Goya to the swirling spirituality of El Greco. Looking at his works is like taking a quick survey course in the history of Spanish painting. 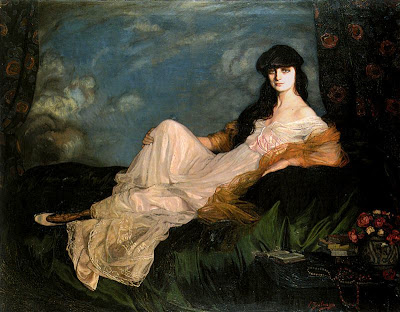 My favorite Zuloaga painting remains The Portrait of Countess Mathieu de Noailles (above), from 1913. Earning most of his income from commissioned portraits, Zuloaga painted many of the members of Spanish and French high society in his day. Countess Mathieu de Noailles wrote novels and earned a reputation as a strong, liberated woman. The many peach-colored gradations of her dress almost hide the fact that her one shoulder is brazenly bare. Her flesh tones meld with the color of her clothes so closely that she seems almost entirely nude, if not for the drapery. The Countess’ powerful gaze at the viewer clearly places her in a modernist light—not the submissive society patroness of the past but an artist in her own right. Zuloaga, a great artist in his own right, revitalized Spanish art and breathed new life into the Old Masters.

I appreciate the concern which is been rose. The things need to be sorted out because it is about the individual but it can be with everyone. I like this particular article It gives me an additional input on the information around the world Thanks a lot and keep going with posting such information.
======================
www.motorhomesandcaravans.com