Master of the Sky 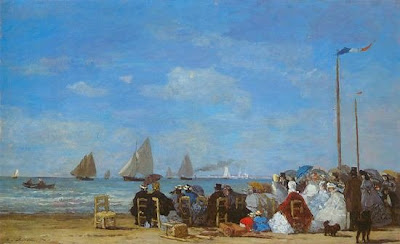 “You are the master of the sky!” Jean-Baptiste Camille Corot once said to Eugene Boudin, born on July 12, 1824. Master of both sky and sea, having once been a seaman, Boudin broke new ground and was among the first French landscapists to paint en plein air. Beach Scene at Trouville (above) demonstrates Boudin’s dominion as well as his early proto-Impressionist technique.

Boudin worked at a small art shop run by his father, who gave up the sea-going life early. Working in the shop, Boudin met artists such as Jean-Francoise Millet and the Dutchman Johan Jongkind, who encouraged Boudin to take his painting outdoors. In 1857, the 33-year-old Boudin met the 17-year-old Claude Monet, the beginning of a life-long friendship. Monet later exhibited in Boudin’s shop and acknowledged his debt to Boudin. In 1859, Boudin met Gustave Courbet, who thought enough of his work to introduce Boudin to Charles Baudelaire, whose reviews of Boudin’s work helped him find an audience. Despite his connection to Monet and even exhibiting with the Impressionists, Boudin resisted the Impressionist label. Even today, he’s seen more as a maritime painter thanks to works such as Trouville, Awaiting the Tide (above).

As Pissarro was to Cezanne and other artists, Boudin was to the young Monet—helpful mentor, generous friend, and gentle teacher. In the standard history of Impressionism, Monet and Cezanne seem to come out of nowhere. It doesn’t belittle their genius to say that even they stood on the shoulders of others who may not themselves have been giants, but who certainly deserve remembrance.
Posted by Bob at 5:40 AM