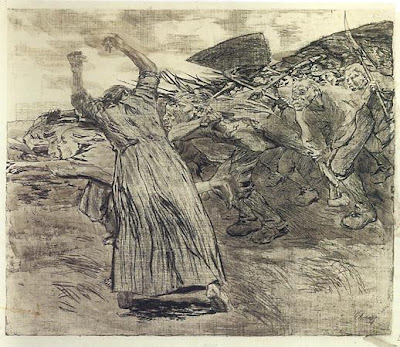 “People from the bourgeoisie were entirely without charm for me,” Kathe Kollwitz said in her 1941 memoirs. “On the other hand, the proletariat had great style… I simply found it beautiful. As Zola or someone said, ‘The beautiful is the ugly.’” Kathe Kollwitz found beauty and dignity in the common person suffering and struggling through life and portrayed it with a power and resonance like few others. In Outbreak (above), part of the Peasants’ War series, “Black Anna” leads a charge of peasants against their oppressors. Kollwitz shapes the bodies of the oppressed into an arrowhead striking against tyranny. By showing “Black Anna” from the back, Kollwitz stresses the facelessness of the downtrodden’s struggle, which transcends place and time. 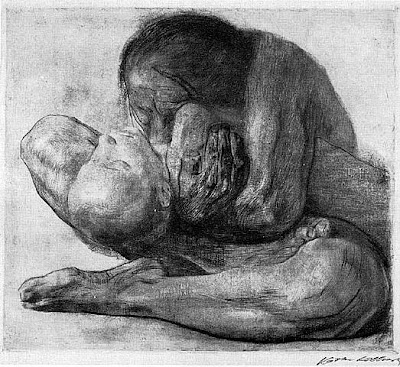 Fellow artist Max Klinger taught Kollwitz early on the power of black and white to convey ideas, free of the noise of color. They shared a faith in the power of graphic art to convey ideas and emotions, such as in her Woman With Dead Child (above). Rejecting the more progressive art styles of the twentieth century, Kollwitz embraced a simple style of powerful draftsmanship, believing that modern art had lost its common touch. “To be sure, Genius can run ahead and seek out new paths,” she wrote in her diary in 1916, “good artists, however, who come after genius—and I count myself among these—have to create again the connection that has been lost.” Kollwitz’s humility downplayed her own special genius to stir emotions and transcend barriers of language and culture. Any parent seeing this image immediately connects with the feeling of losing a child. Peter, Kollwitz’s youngest son and the model for this drawing, died in the opening days of World War I in Flanders. 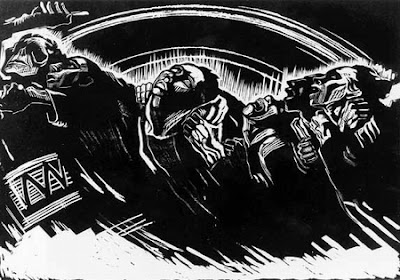 Peter’s death mobilized Kollwitz’s social consciousness. In images such as The Volunteers (above), which shows death beating the drums of war and leading young men off to die, Kollwitz spoke eloquently of the siren song of war as well as the need for peace. Sadly, Kollwitz’s grandson, also named Peter, volunteered for World War II and died in 1942, repeating the same grim cycle of her own son years before. She struggled under the oppression of the Third Reich and received the label of “degenerate art” despite her great stature in German culture. Kollwitz died in 1945 at the age of 77, a scant eight days before Adolf Hitler found his own “final solution” in his infamous bunker beneath Berlin.

“I am in fact not at all revolutionary, but rather evolutionary,” Kollwitz wrote in her diary in 1920, expressing her wariness of any ideology and her faith in the goodness of the common people. “I am horrified and shaken by all the hatred in the world, I long for the kind of socialism that lets people live, and find that the earth has seen enough of murder, lies, misery, distortion. In short, of all these devilish things. The communist state that builds on that cannot be God’s work.” Kollwitz indeed performed “God’s work” in her art, depicting the oppressed and never the oppressor, raising empathy and compassion to an ideal above all others. The revealing self portraits she left behind, such as the one above, show a face that knows grief and knows how to communicate that knowledge. I’ve always felt that Kollwitz’s work exemplifies the spirit of the Beatitudes like few others: merciful, pure of heart, hungering and thirsting for justice, peacemaker.
Posted by Bob at 6:37 AM