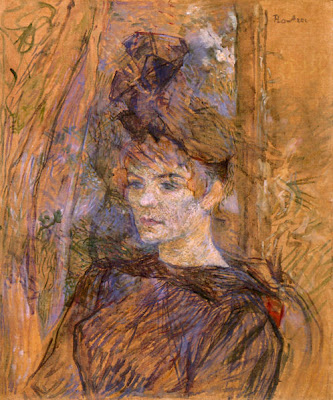 When she was fifteen and working as an acrobat in a circus, Suzanne Valadon fell from a high trapeze and ended her career under the big top. Born September 23, 1865, Valadon soon found a new purpose for her beauty and athletic build—modeling for the great artists of France. Henri de Toulouse-Lautrec, Pierre-Auguste Renoir, Pierre-Cécile Puvis de Chavannes, and many other artists soon immortalized Valadon again and again. (Toulouse-Lautrec’s Portrait of Suzanne Valadon appears above.) Valadon soon became more than a model, having affairs with both Renoir and Puvis de Chavannes, among others. She gave birth, perhaps from one of these liaisons, to a son who would one day become the artist known as Maurice Utrillo, fueling rumors that the father had to be one of the great artists. After progressing from model to lover, Valadon soon enticed these artists to show her how to paint. Edgar Degas, for whom Valadon never modeled and never entangled romantically with, encouraged Valadon’s efforts and showed her techniques of drawing and pastels. From humble beginnings, Valadon soon found herself in select artistic circles. 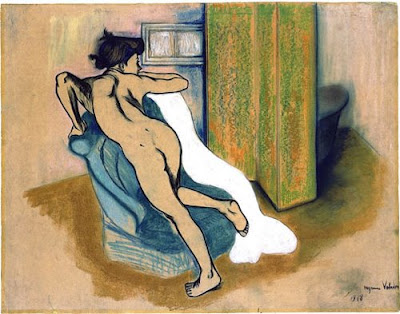 Of all the artists Valadon worked with, Degas seems to have had the greatest influence. Valadon drew and painted countless Degas-esque nudes, as in After the Bath (above, from 1908). Although her drawing technique differs from that of Degas, Valadon’s choice of subject matter clearly links her to Degas. Valadon even uses many of the unconventional poses Degas placed his female nudes into, accentuating the curves and lines produced in those awkward, unguarded moments. Looking at a work such as After the Bath, you see some of the possibilities that Degas never explored in his pursuit of other experiments. Valadon never creates the dizzying, almost pulsating pastels Degas mastered, but her simplicity of line and flat color seem like prophesies of the later work of the Fauves or even the early Pablo Picasso. 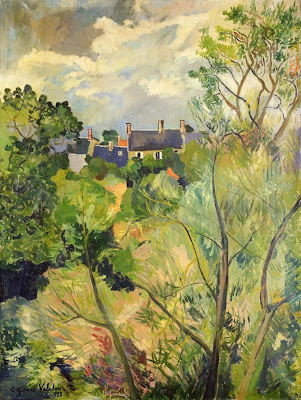 Valadon never lost her allure for men. Even the almost asexual classical composer Erik Satie fell for Valadon, and fell hard. Satie proposed to Valadon on their first date. Although she never married Satie, she did run through a series of husbands as she continued to mature as an artist and develop her own style. The nudes of her Degas-influenced period gave way in the twentieth century to still lifes with flowers and landscapes such as View from My Window in Genets (Brittany) (above, from 1922). The first woman painter admitted to the Société Nationale des Beaux-Arts, Valadon broke new ground for women in the still male-dominated art French art world and earned the respect of several generations of male artists. Picasso, Andre Derain, Georges Braque, and other artists attended her funeral in 1938, paying their respects to a unique figure in French painting of the late nineteenth and early twentieth century—a woman who knew life from both sides of the easel and acrobatically leapt over every obstacle on her way to the top.

Hello Bob,
Since I have discovered your blog I can't stop reading post after post (I read english better than I write it...)
It's genial.
I would link you in my blogs:
http://mujeresenelarte.blogspot.com
http://colegasinvitados.blogspot.com
http://bibliotecademujeresartistas.blogspot.com
and in my web: www.gradiva.es (enlaces)
Do you have any problem?
Thank you,and congratulations.
(Now I'm going to read some other post)