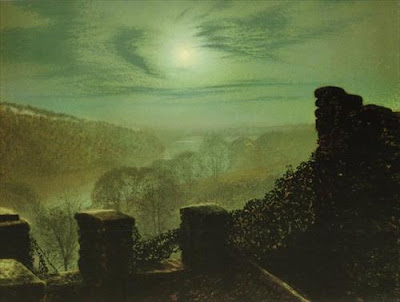 In the second half of the nineteenth century in England, several lines of influence dominated the art world. Thanks to the writings of John Ruskin, the early works of J.M.W. Turner loomed over all European and American landscape artists. (Ruskin disliked the late, visionary Turners that we embrace today.) Ruskin’s influence also helped bring the Pre-Raphaelite Brotherhood to the public’s attention. Caught up in this confluence of influence, artists such as John Atkinson Grimshaw seem destined to go with the flow. Born September 6, 1836, Atkinson Grimshaw painted beautiful, Turner-esque landscapes such as Full Moon behind Cirrus Cloud from the Roundhay Park Castle Battlements (above, from 1872). The same clarity and attentiveness to detail that distinguishes Ruskin’s beloved early Turner appear here. Atkinson Grimshaw’s use of the term “cirrus cloud” in his title shows that he knew of Luke Howard’s recently developed classification system for clouds, probably second-hand via Ruskin, who included Howard’s terms in his writings on Turner. I hate to draw such a direct line of influence, because influence can quickly make a work seem derivative, but Atkinson Grimshaw’s seascape and wonderfully depicted sky honor Turner’s work rather than mawkishly imitate it. 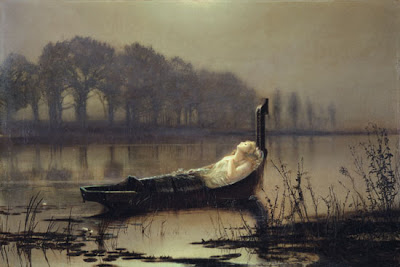 Like any good Victorian, Atkinson Grimshaw read and knew his Tennyson. Just as the Pre-Raphaelite Brotherhood almost obsessively depicted the works of Tennyson, Shakespeare, and other prime English authors, Atkinson Grimshaw tried his hand at painting Tennyson’s The Lady of Shalott (above, from 1894). Whereas others focused on the characters, Atkinson Grimshaw maintained his focus on the landscape. He beautifully renders the trees off in the distance as the misty air softens their shapes into almost nothingness. The contrast between those almost Impressionist trees and the exactingly painted foliage in the foreground testifies to the fidelity Atkinson Grimshaw pursued in his painting, even when delving into fictional, mythical subject matter. Looking at the far trees and the near plants in this painting, you can see the two worlds of painting technique vying for Atkinson Grimshaw’s artistic soul as Ruskin’s influenced waned and a new sun—Whistler—broke on the horizon.

Ruskin and Whistler fought some epic, public, and even legal battles over what constituted “art.” When Atkinson Grimshaw painted Reflections on the Thames, Westminister (above, from 1880), the Ruskin—Whistler court case still lingered in the collective art conscious of England even two years later. Atkinson Grimshaw finally seems to cross the fine line between a Turner-esque sky (as in Full Moon behind Cirrus Cloud from the Roundhay Park Castle Battlements, top) and a Whistler-esque sky in Reflections on the Thames, Westminister. Even the title of the 1880 painting lacks some of the specificity of the earlier work, replacing cirrus clouds with ambiguous “reflections.” It’s more of a feeling than a scientific analysis that leads me to see this difference, but that may be due to Atkinson Grimshaw’s ability to merge so many of these different factors into his art. Certainly a skilled artist, Atkinson Grimshaw’s landscapes still hold an attraction for their style if not their originality and provide a fascinating demonstration of how the different influences of an age could be synthesized by a single artist.