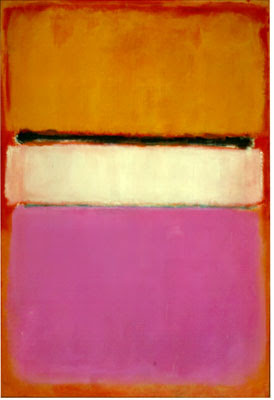 Know then thyself, presume not God to scan
The proper study of Mankind is Man.
Placed on this isthmus of a middle state,
A Being darkly wise, and rudely great:…

Chaos of Thought and Passion, all confus'd;
Still by himself, abus'd or disabus'd;
Created half to rise and half to fall;
Great Lord of all things, yet a prey to all,
Sole judge of truth, in endless error hurl'd;
The glory, jest and riddle of the world.

—From An Essay on Man by Alexander Pope

“The size I am speaking about is the size of a man, or rather my own relation to my own decisions as to the best size a man can be,” Mark Rothko once said when trying to explain the bigger-than-life scale of so many of his paintings, including White Center (above, from 1950). “To this extent I am again a Renaissance man, for my pictures [are] a personal tape measure of my moral values.” In Rothko, edited by Oliver Wick, Rothko as Renaissance man, specifically an Italian Renaissance man, is reborn. Accompanying an exhibition at the Palazzo delle Esposizioni in Rome, Italy, last year, Rothko examines the link between Rothko the modern artist and the artists of the distant past, whom Rothko modeled his own art and career after. Writing of Rothko’s drawings patterned after Leonardo da Vinci’s Vitruvian Man, Wick sees Rothko “[u]sing the Leonardo not as a direct model, but as an allusion and intellectual parallel” in order to “play… with an internalized image of man and human proportions.” “Do they negate each other, modern and classical?” Rothko once asked. Borrowing that line for the title of his essay, Wick definitively answers no. Wick sees Rothko longing for the good old days of the Renaissance when the artist could fulfill a vital role in society rather than lurk on the perimeter.

Christopher Rothko, the artist’s son, picks up on Wick’s examination of Rothko the Renaissance man with his essay, “Mark Rothko’s The Artist’s Reality: Philosophies through an Italian Lens.” “Rothko places the artist/philosopher at the center of [his ideal] society,” Christopher says of his father, “as a leader in expression of truth and of synthesizing a gestalt understanding of the world around him or her.” Such social works as the Seagram Murals (one example above, from 1958) show how Rothko longed to connect with the public and publicize his thoughts on life through his art. In Rothko’s unfinished treatise on art, The Artist’s Reality, Rothko looked all the way back through Italian art history to Giotto to find a kindred spirit. “In Giotto’s painting [Rothko] saw an embodiment of his own modernist ideals: figures of real weight and substance, bold use of color that helped create the painting’s space rather than remaining subservient to it, and the creation of art that depicted its own reality rather than functioning as pastiche of the ‘reality’ presented to us by sight alone,” Christopher writes. In contrast, Michelangelo, although “visually stunning,” enslaves himself to perspective and the other visual trickery that “preoccupied” Renaissance artists. For Rothko, Christopher writes, “The artist’s role is that of the philosopher: to examine the world around him and express his understanding of the truth based on what he sees.” Michelangelo simply doesn’t express this “truth” for Rothko. da Vinci, however, fares better in that he recognizes the limitations of perspective and uses sfumato and chiaroscuro to restore the “subjective” over the slavishly scientific. Titian, Tintoretto, and the School of Venice stand as heroes for Rothko in “creating a new naturalism, a type of artwork that speaks to our unified experience of the world, not an appeal to our eyes through a collection of visual effects.” Christopher Rothko’s profound understanding of his father’s appreciation of the Italian masters not only sheds new light on Rothko’s painting but also provides a fascinating perspective on these past painters.

Rothko carried on his love affair with Italy and Italian art most of his adult life. First travelling to Italy in 1950 on a Fullbright Scholarship, Rothko filled his days with sightseeing and museum-going. In “Mark Rothko’s Three Italian Journeys,” Giovanni Carandente traces Rothko’s path through Italian art history during his 1950 visit and subsequent visits in 1959 and 1966. On his second and third visits, Rothko fell in love with the frescoes by Fra Angelico at the Convent at San Marco. “In the cells of the Florentine convent,” Carandente writes, “the evangelical episodes narrated on a wall for a single viewer to meditate upon became the optimum for a painter like Rothko.” Such an experience prompted Rothko to design the Rothko Chapel, a modern sacred space of private meditation. Again, the catalogue beautifully recreates how Rothko linked the work of these artists with his own mature work. As Wick points out, Rothko often claimed that his abstract works “liberated from representation and objective image, were profoundly charged with content, raising the question of a contradiction in terms of associating modern abstraction with classical art and its content.” The essays collected by Wick convincingly answer the question of the contradiction between Fra Angelico’s biblical scenes and Rothko’s blocks of color (as in Red, Orange, Tan, and Purple, above, from 1949) as both addressing a human need for bigger answers. Both artists arrive at salvation from vastly different visual paths but with an identical drive to justify the ways of god to mankind. 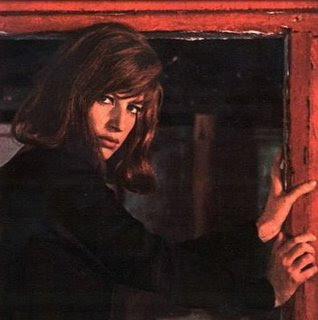 Perhaps the most fascinating essay in the collection is Jeffrey Weiss’ “Temps Mort: Rothko and Antonioni.” Italian filmmaker Michelangelo Antonioni visited Rothko’s studio in 1962 while touring for the United States opening of L'eclisse. “In the annals of existentialism as something like an international style during the rise of the Cold War,” Weiss writes, “there can be no more striking display of generational inheritance than this meeting.” For hours, Antonioni sat silently as Rothko paraded a succession of his works before him. Antonioni’s next film, Il deserto rosso, his first color film clearly draws on Rothko’s art for inspiration. Throughout, as Weiss points out, Antonioni uses frames and margins “as both an image and a compositional device,” as shown in the example of the film’s star, Monica Vitti, literally framed by Rothko-esque color (above). Even more importantly for Antonioni’s connection to Rothko is the use of “temps mort,” which Weiss defines as “the evacuation of a depicted space contained or cropped by the cinematic frame, a just-inhabited place that achieves formal presence—abstract, quasi-pictorial fullness—through a narrative absence that transpires before the beholder’s gaze.” Vitti may exist in a virtual Rothko in the example above, but when she walks out of that frame and the camera lingers on that space after her absence, that frame retains a special electric charge by her absence. Through such sequences, Antonioni duplicates the paradoxical union of presence within absence that makes Rothko’s art so simultaneously enigmatic and compelling. Weiss wonderfully explains and illustrates this subtle, yet powerful argument that might actually convert many who fail to “get” Rothko. 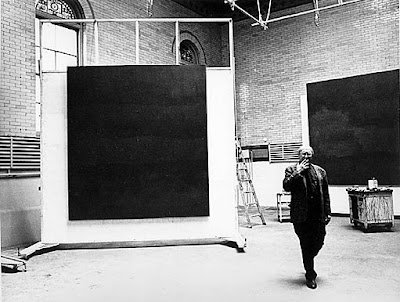 As much as Rothko loved Italy and its art, Italy loved Rothko back. Claudia Terenzi recounts the critical and popular reception of Rothko in Italy, which is remarkably prescient and informed. “It’s easy to say that he’s the painter of nothing, in order to denigrate his creation,” Italian critic Marco Valsecchi writes in 1962. “But it requires only a little more attention to see that nothing is, instead, filled with that spiritual essence one finds in the quiet, vertical pages of some baroque mystics.” Rothko (shown above in his studio with the Rothko Chapel murals in 1964) is the Seinfeld of abstract art—his works are about nothing, yet they touch on everything, from the minute to the grand. Oliver Wick and his fellow contributors compellingly argue for Rothko’s relevance through his philosophical if not stylistic links to Italian art’s greatest artists. Anyone who sees nothing in Rothko’s work should read Rothko and open their mind. Anyone who already sees something in Rothko’s paintings will read Rothko and discover yet another universe to be explored.

[Many thanks to Rizzoli for providing me with a review copy of Rothko, edited by Oliver Wick.]