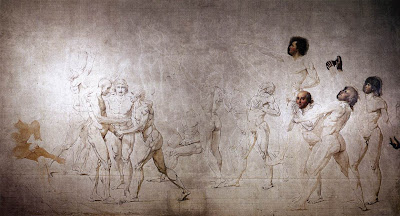 May you live in interesting times, goes the old Chinese curse. Jacques-Louis David lived in the interesting age of the French Revolution and served as the great icon-maker of that failed experiment in democracy. Born August 30, 1748, David witnessed firsthand many of the landmark events in the Revolution, including the Oath of the Tennis Court, when the French people pledged for the first time unity in opposition to Louis XVI. David sketched the scene on a small scale, but later planned a grand painting to match the importance of the event (above, from 1791). After sketching in the figures and the main points of the composition, David began working on highly finished portraits of the important revolutionaries. The chaos of later events, including the guillotining of some of those heads, prevented David from finishing his epic work, leaving those portraits atop muscular nude bodies upon which David later planned to add clothing. In many ways, David’s incomplete painting of The Tennis Court Oath symbolizes the lofty aspirations of the revolution and the failure to complete that mission. 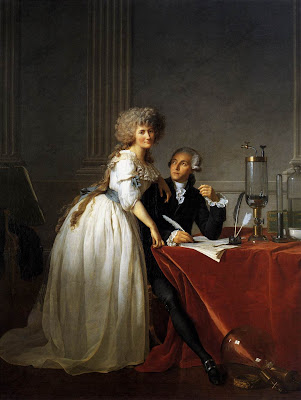 David traveled in the most glamorous circles of Parisian society. When Antoine Lavoisier’s wife Marie-Anne wanted a portrait done of them, she asked David, who had once taught her painting. David’s Portrait of Antoine-Laurent and Marie-Anne Lavoisier (above, from 1788) shows the father of chemistry at the height of his powers alongside his also formidable wife. A true renaissance man, Lavoisier worked not only in the field of science but was also highly active in politics, proposing moderate reforms that he and others hoped would ease France’s transition from a monarchy to a democracy. Unfortunately, such moderation gave way to the violent excesses of those who wished not only for change but revenge. Lavoisier himself died on the scaffolding under the blade of the guillotine. In contrast, David rose through the political ranks, eventually calling for the beheading of Louis XVI himself at the gathering of the National Convention while sitting beside his influential friends, Maximilien Robespierre and Jean-Paul Marat. 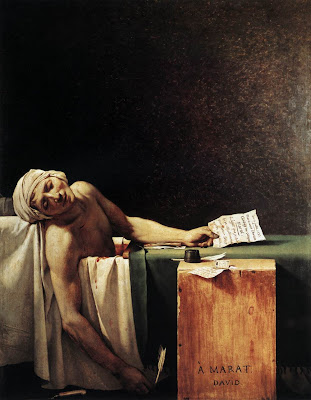 By most accounts, Marat was a monster, a bureaucrat who coldly condemned others to death. Suffering from a horrible skin disease, Marat sat in a bath daily to ease his affliction. When a woman named Charlotte Corday entered Marat’s home on the pretext of providing a list of enemies of France, Marat blithely condemned everyone on the list to the guillotine. Corday pulled a knife from her clothes and stabbed Marat to death. David commemorated his friend’s death in his greatest painting, The Death of Marat (above, from 1793). David elevates the objectionable Marat to the status of sainthood, generating the necessary propagandistic energy to fuel calls for revenge against the group with which Corday sympathized. As a painting, The Death of Marat works amazingly well, spotlighting the fallen figure against a deep Caravaggio-esque black while invoking the Pietà of Michelangelo in the (false) marble smoothness of Marat’s naked skin. David rode the wave of violence to the coattails of Napoleon himself, providing the necessary visuals for Napoleon’s rise to power. After Napoleon’s fall, however, David found himself lost and fled France. For his involvement in the death of the king, David could never return, not even after his death in 1825. David’s body rests in Belgium, but his heart eventually was buried in Paris’ famous Père Lachaise cemetery—one last incomplete act in a lifetime of unfulfilled promise.

What a fascinating art/history lesson!