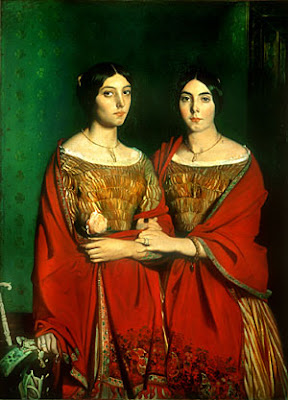 "Never speak to me again of that child!" Jean-Auguste-Dominique Ingres cried out in anguish after the mere mention of the name of Théodore Chassériau after their artistic parting of the ways. Ingres welcomed Chassériau into his studio in 1830 as an 11-year-old prodigy. Born September 20, 1819, Chassériau soon became Ingres greatest and most favored student, spurring the master to predict that Chassériau would one day be “the Napoleon of painting." By 1840, however, Chassériau committed the most horrible betrayal of all that Ingres stood for—he fell under the spell of Ingres’ Romantic rival, Eugène Delacroix. "In a long conversation with M. Ingres, I saw that on many issues we could never have a meeting of minds," Chassériau told a friend. Marrying Ingres’ classical style of draftsmanship with the bold colors and drama of Delacroix, Chassériau created portraits such as The Two Sisters (above, from 1843) before following Delacroix’s example and venturing into the exotic world of Orientalism. While the entire French art world seemingly chose sides in the great Ingres-Delacroix debate, Chassériau tried to bridge the gap and remain true to both his masters. 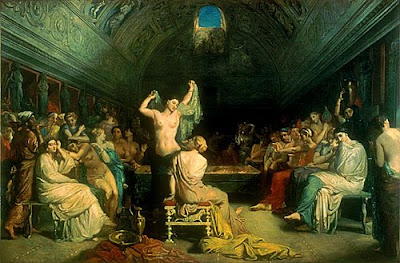 When archaeologists unearthed the baths of Venus Genitrix at Pompeii, Chassériau travelled to see them and modeled The Tepidarium (above, from 1853) on those ruins. Chassériau hoped to breathe new life into the world of the tragic people of Pompeii, claiming he had “kissed the extraordinary, painful traces” of their lives buried so long ago. By transplanting the harem scene so familiar to Orientalism (and done both by Ingres and Delacroix in their own styles), Chassériau tries to bring the two poles of his imagination together. The nude women bear the pearly smooth skin of classical sculpture and Ingres’ odalisques, but the frenetic composition and lush color are pure Romanticism and Delacroix. The Tepiarium comes from ancient Roman culture, but the dress worn by the women seems more like something from the exotic East—a Turkish rather than a Roman bath. Viewers at the 1853 Paris Salon marveled at Chassériau’s deft handling of the stylistic debate he had fallen into. The 34-year-old artist looked like he might become “the Napoleon of painting” after all. 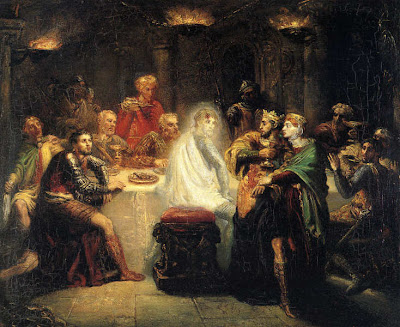 In 1846, Chassériau traveled to Algeria, following in the footsteps of Delacroix. The year before, Chassériau painted the portrait of Caliph of Constantine, Ali ben Ahmed, in France, and the Caliph invited his new friend to visit his homeland. France had nearly completed its annexation of Algeria as part of its imperial program at that time. Chassériau’s intimate contact with the native people of Algeria led him to question the morality of colonization. In 1854, Chassériau painted Macbeth Sees the Ghost of Banquo (above), one of the many scenes he painted of the works of William Shakespeare, just as Delacroix had done. In depicting Macbeth driven mad by guilt and confronted by the specter of his crime, Chassériau may be commenting on the eventual fate of France in usurping the rights of Algeria—a sad fate that would not be concluded for a century. Two years after painting Macbeth Sees the Ghost of Banquo, Chassériau died after years of poor health and an exhausting schedule of commissions. Only 37 years old, Chassériau should have had decades of masterpieces before him. Within a decade or so, artists such as Puvis de Chavannes and Gustave Moreau rediscovered the work of Chassériau and emulated his struggle to bring two worlds together.

Great blog, and interesting post, but this is the first time I've seen "bipolar" used to describe someone torn between mentors, traditions, or dispositions ("schizophrenic" is typically (mis)used in this way).

Granted, there aren't many great English words for this common state. "Split" and "torn" seem a bit rough, "divided" and "ambivalent" a bit limp. There must be a more accurate adjective I'm missing...