While studying in Paris under Jacques-Louis David right after the French Revolution had swept religious orders such as the Capuchins from the land, Francois-Marius Granet, like many other artists of the time, occupied one of the vacant monastic cells. Born September 17, 1775, the withdrawn Granet found himself oddly at home in the seclusion of the isolated cell. “How full your heart is with sweet reverie when you have the good fortune to breathe that pure air!” Granet later wrote of his elation upon entering such closed spaces. “How readily you would forget all the commitments you have made to society. But we are not all born for such happiness.” Although the clergy were long gone, Granet recreated their activities in atmospheric paintings such as The Choir in the Capuchin Church on the Piazza Barberini, Rome (above, from 1808). Anticlericism raged across Europe at the time. Granet even found difficulty in getting models to wear religious dress. Sympathetic depictions of Christian rites drew suspicion from authorities, but Granet’s paintings are moody and enigmatic enough for one to read both sinister or mystical thoughts with equal ease. Granet painted sixteen versions of this work, his most successful subject, feeding the public’s taste for imagery of the reclusive monks and their rites performed behind closed doors.

Of course, Granet knew nothing about what those rites actually looked like. But that didn’t stop him from painting what he thought they looked like. The Crypt of San Martino ai Monti, Rome (above, from 1806) shows what Granet thought the mysterious burial rites of Christianity looked like when performed deep in the crypts below a church. A female corpse shrouded in white adds a sexual touch, completing the picture for those suspecting the worst of religious figures. Matthew “Monk” Lewis’ infamous 1796 Gothic novel, The Monk, set the standard for over-the-top speculation of just how decadent and debauched the Catholic church had become. Lewis simply translated into fiction what centuries of Protestantism and the years of the French Revolution had already inscribed upon the mainstream consciousness as accepted knowledge. Yet, Granet actually enjoyed the monastic life. Painfully shy, Granet would have become a monk just for the solitude, if he could have done so and lived. His ability to paint such scenes without official criticism seems miraculous today. 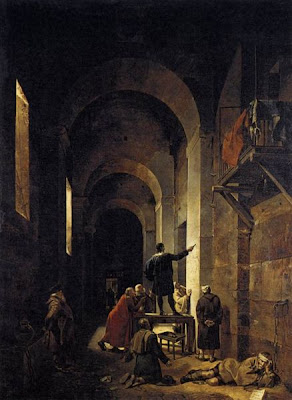 For Granet, enclosed spaces meant freedom and the world at large felt like a prison. In 1810, Granet painted Jacques de Stella in Prison (above), which shows the seventeenth century painter painting a Madonna on a prison wall. de Stella puts his time in prison to good use and attracts the attention of other inmates and even the jailer. Granet found a kindred spirit of sorts in de Stella, believing that any obstacle, even shyness, can be overcome with hard work and talent. Napoleon’s Josephine purchased Stella in Prison, setting off a chain of events in which Granet eventually played an influential role in the development of the Louvre. As the taste for sensational paintings of Catholicism faded, Granet evolved into a keeper of the artistic crypt of the Western tradition, helping make the Louvre the greatest art museum on earth. When the political winds shifted again, Granet withdrew once again to the silence of his studio, “the only place where the artist remains free,” he later wrote. Agoraphobic or simply socially awkward, Granet gives a whole new meaning to the phrase “painter of interiors.”

The most important exhibition of the year: CORREGGIO in PARMA (Italy)

When I first read this post, my monitor was tilted and the paintings were practically all black! They are still dark even now. Despite the dreariness, they are certainly eye catching. Dwelling in shadow seems to have worked for him!