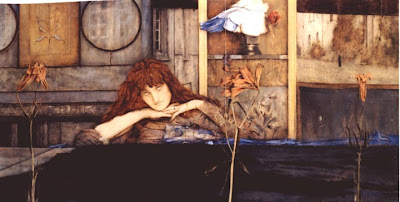 God strengthen me to bear myself;
That heaviest weight of all to bear,
Inalienable weight of care.

All others are outside myself;
I lock my door and bar them out
The turmoil, tedium, gad-about.

I lock my door upon myself,
And bar them out; but who shall wall
Self from myself, most loathed of all?


—From “Who Shall Deliver Me?” by Christina Rossetti

When the Belgian Symbolist painter Fernand Khnopff traveled to England in 1889 and met up with the Pre-Raphaelite Brotherhood, Khnopff found kindred spirits in such artists as Dante Gabriel Rossetti and William Holman Hunt, but it was in the poetry of Rossetti’s sister, Christina, that Khnopff found a source of inspiration. Born September 12, 1858, Khnopff became obsessed with one particular poem by Christina—“Who Shall Deliver Me?” In 1891, Khnopff painted one work using the same title as the poem and another taking one of the key lines for a title, I Lock the Door Upon Myself (above, from 1891). In Christina Rossetti’s ode to alienation, Khnopff found an analogue to the alienation he sought to depict in his strange, Symbolist paintings of half-mythical creatures and humans longing to connect. The fact that Khnopff’s Symbolism and the Victorianism of the Rossettis and others in the Pre-Raphaelite circle meshed so well shows just how progressive the art of that era could be, despite the common preconception of the Victorian Era as one long constipated bout of repression.

Of course, Khnopff’s taste in poetry often did favor poets known as Symbolists as well, such as Stephane Mallarme. Khnopff’s painting Stéphane Mallarmé's Poetry's (Listening to Flowers) (above, from 1892) beautifully captures the indescribable experience of indulging oneself completely with poetry. The subtitle “Listening to Flowers” seems nonsensical until you accept that listening to Mallarme’s poetry itself is often a non-rational, nonsensical exercise. Just as with artists trying to paint music, Khnopff sets himself up with a tremendous challenge in trying to translate poetry into a visual medium beyond just simple illustration, which the Pre-Raphaelites often did for the works of Tennyson, Keats, and others.

Years later, Khnopff returned to the theme of poetry in his painting Sappho (above, from 1912). In his depiction of the famous Greek poetess (and infamous “original” lesbian), Khnopff accentuates the sexual nature of her poetry in a decidedly non-Victorian way. Such works inspired younger artists such as Gustav Klimt to take similar figures of the past and explore the sexual possibilities in the new, symbolically evocative style Khnopff (and Gustave Moreau before him) pioneered. By openly flirting with the taboo of homosexuality, Khnopff broke new ground that Klimt would delve even further into in his drawings and paintings of women together. At the moment in which classical poetry began to evolve into what we know as modern poetry, Fernand Khnopff helped give it visual form and added another dimension to it that later artists such as Picasso (with Guillaume Apollinaire) would take even further.