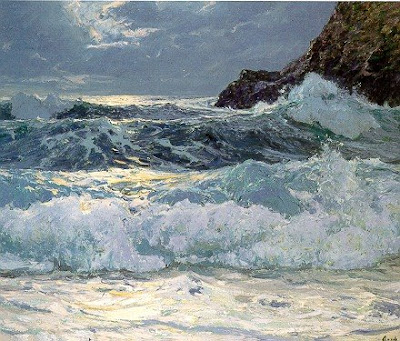 "To paint the sea, you must love it,” Frederick Judd Waugh once said, “and to love it, you must know the sea." Born September 13, 1861, Waugh traveled throughout his life in search of the sea, growing intimate enough with the tides to paint such beautiful marine scenes as Breakers at Floodtide (above, from 1909). Although he studied at the PAFA under both Thomas Eakins and Thomas Anshutz, Waugh never found his footing in painting the figure as successfully as his teachers. Instead, Waugh’s best work looks like an Eakins depopulated, in the very best way. Genre paintings such as Chess Players (1891) and Family Resting Under a Tree (1889) show an awkwardness with the figure that totally disappears when Waugh gets flowing before a seascape. After studying in Philadelphia and Paris, Waugh resided on the Island of Sark off the French coast for two years and in St. Ives, Cornwall, for twelve years before moving back to the United States to live on the New England coast for the rest of his life. With the exception perhaps of Winslow Homer, no other American artist of that period studied the sea as closely and painted it as brilliantly as Waugh.

Waugh painted Southwesterly Gale, St. Ives (above, from 1907) while still living in Cornwall. It’s fascinating how he brought the classic Eakins-like fidelity to detail to the seascape, capturing all the atmospheric and light effects faithfully. Comparing a Waugh seascape to a work by J.M.W. Turner, the pre-eminent British painter of the sea, you find a lack of imagination in Waugh’s work. Turner’s one of the great visionaries in all of art, so such a comparison on those grounds is unfair, but Waugh brings a totally different perspective to the seascape that’s more analytical than Romantic. Countless hours of observation made Waugh into a scientist of the sea, yet he never lost that human connection to the subject. 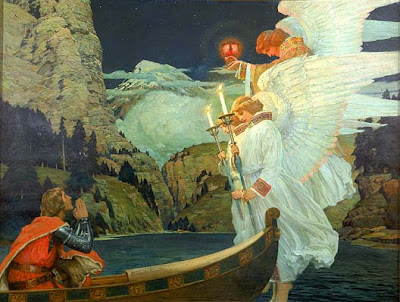 As the Age of Illustration captured the American imagination around the turn of the century thanks to Howard Pyle and his students such as N.C. Wyeth, Waugh attempted paintings of narrative subjects such as his The Knight of the Holy Grail (above, from 1912). The awkwardness of his early figure paintings lessens in these later works, but despite his mature style you clearly see that his heart isn’t in it. The knight and the angelic figures dominate the foreground, but the real star of this show is the landscape behind them. You almost wish they would get out of the way. I’ve always found Eakins’ students fascinating in the sense of how they so often took paths so divergent from his. While Eakins found the human form and human psychology so compelling a subject to paint, Waugh, his student, tried his best to follow that path but always found himself turning away, lured by the siren song of the sea.