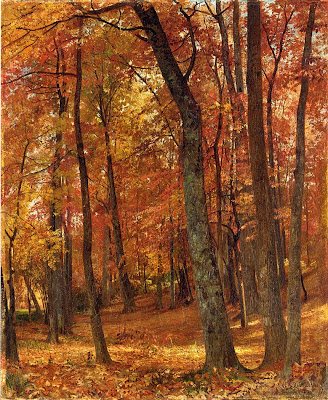 If you think that’s a photograph above, you’re wrong. It’s hard to believe, but William Trost Richards’ Forest Interior (above, from 1865) is just one example of the incredibly photographic draftsmanship of one of America’s truly great landscapists of the nineteenth century. Born November 14, 1833, Richards falls within an art historical crack—born too late to be considered truly part of the Hudson River School and born on the wrong side of the Atlantic to join the Pre-Raphaelite Brotherhood. Richards’ painting is too clinically precise to join the ranks of Thomas Cole, Frederic Edwin Church, and other more spiritually oriented Hudson River School artists. On the other hand, Richards’ precision matches that of Pre-Raphaelite greats such as John Everett Millais except for one major detail—an almost complete lacking of the human figure. Occasionally Richards would set a person into his landscape as an almost grudging concession to convey a sense of scale. The literary flights of fancy the Pre-Raphaelites painted over and over, however, never enter into Richards’ signature style. Just the facts, he seems to say. Just the facts are magical enough for me.
Richards grew up in Philadelphia but studied for years in Europe before returning to live in Pennsylvania. Upon his return, Richards brought back much of the grand style of Romanticism ala Caspar David Friedrich, but, again, devoid of human presence. Moonlight on Mount Lafayette, New Hampshire (above, from 1873) demonstrates how Richards could depict effects of light on the landscape and on clouds beautifully. Looking through Richards’ oeuvre, you never get the sense that he repeated himself. From fire-red autumnal scenes to cool-blue moonlit landscapes, nothing seemed beyond Richards’ reach. Yet, for all his technical proficiency, he’s little known today, just a footnote in the histories of American art. Perhaps he’s too good, almost too photographic. Realism this real seems somehow unreal without some sense of the artist’s personality mixed in. Unfortunately, Richards never provides a clue to who he is other than a great recorder of nature.

As great as Richards was with oils, he paints in watercolor even better, as can be seen in works such as Beach with Rising Sun, New Jersey (above, from 1870-1875). In the last stage of his career, Richards concentrated mainly on marine scenes, as if he had mastered the inland and now set out to conquer the seas. A trip to England in the 1870s during which he saw the watercolors of J.M.W. Turner most likely inspired Richards to put the water in his watercolors. Turner ranks among the greatest watercolorists ever thanks to his combination of technique and Romantic feel for nature. In these final works, Richards seems to approach a Turner-esque level of Romanticism yet still somehow falls short. It’s difficult to look at these great works and say they fail on some level, but it’s more difficult to say they satisfy completely. These works lack the personality we in the West look for in art. But, in the East, the absence of the artist doesn’t disqualify a piece as great art. Maybe Richards achieved a type of Zen in his art that the uninitiated just can’t relate to.
Posted by Bob at 12:01 AM

While a painting like the first one may not contain much personality or much of an intellectual subtext, it's still pretty incredible that the human eye, hand, and capacity for patience can produce something that complexly photorealistic. Definitely a glorious achievement in its own right.