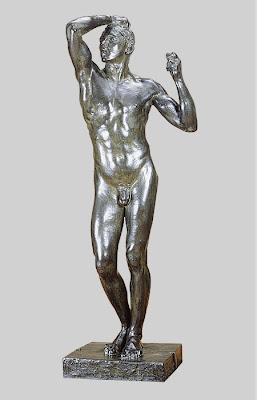 It is so easy to just pass by Philadelphia’s Rodin Museum, dwarfed by the PMA looming so close by. Set back from the traffic surging down the Benjamin Franklin Parkway, the Rodin Museum stands as an oasis from the hustle and bustle of urban life. Born November 12, 1840, Auguste Rodin took the course of nineteenth century sculpture and set it back hundreds of years in order to send it soaring into the future. Works such as Rodin’s The Age of Bronze (above, 1876) harked back to classical sculpture as well as to Rodin’s heroes, Michelangelo and Donatello. The anatomic accuracy of The Age of Bronze led some to accuse Rodin of cheating by simply casting around the live model. Rodin, of course, didn’t need to cheat, but the physical realism of the figure seems almost unimportant beside the psychological realism of the pose. Rodin patterned The Age of Bronze after Michelangelo's Dying Slave. Both sculptures show a figure at the moment of ecstasy, whether the release of death, of sex, or both. Rodin recognized the eroticism embedded in Renaissance sculpture and secularized it for a modern audience. So many artists overreach in tapping the dramatic, but Rodin always seems to be pitch perfect in sculpting human emotion at its peak. 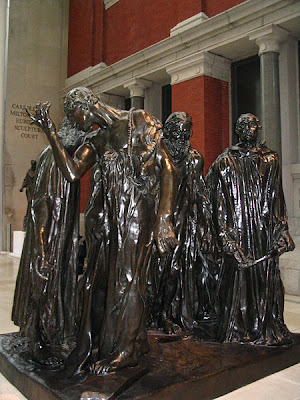 I read years ago an article by a psychologist arguing that Rodin’s The Burghers of Calais (above, from 1889) illustrates all Five Stages of Grief. Elisabeth Kübler-Ross formulated her model of grief seventy years after Rodin sculpted his Burghers, but you can persuasively argue that Rodin knew enough psychology simply by studying human nature that he approximated the stages pretty well. The Burghers tells the story of six men who sacrificed themselves during the Hundred Years' War to save the people of Calais from destruction at the hands of King Edward III’s army. Fortunately, Edward’s queen, Philippa of Hainault, pleaded on their behalf to the king, who spared their lives. Rodin shows the sestet walking to their doom and still believing they are about to die. Few emotions strike so deeply to the heart of who we are as the anticipation of death. In The Burghers of Calais, Rodin prepares each one of us to meet our maker through the example of the torments of even these brave men of history. 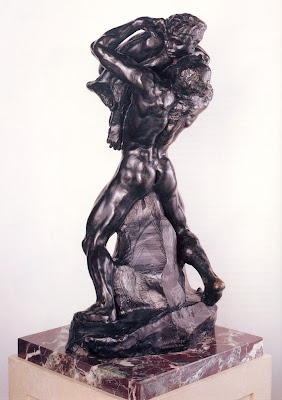 I’ve always thought of Rodin’s finest figures as dancers. Sure, The Thinker remains the poster boy for immobility and The Kiss is the romance after the dance, but works such as I Am Beautiful (above, from 1882) look like a scene from a ballet or a contemporary dance piece to me. I Am Beautiful actually belongs to the suite of sculptures comprising the gigantic whole of Rodin’s Gates of Hell, the pandemonium over which The Thinker muses. The male figure lifts the woman up as if to show the world just how beautiful she is, at least in his eyes. Rodin stole the title from Charles Baudelaire’s poem “Je suis belle” in Les Fleurs du mal:

I am beautiful, O mortals! Like a dream in stone,
And my breast, upon which each is bruised in turn,
Inspires in a poet love silent and eternal
Like that of the material clay flesh and bronze bone.

For a man who treated women so horribly (such as the sculptor Camille Claudel), Rodin knew how to depict human relationships of every shade, from tender to almost destructively passionate. For me, every work by Rodin seems “a dream in stone” where inanimate materials seem as alive as flesh and bone.
Posted by Bob at 12:02 AM