Sitting on the Dock of the Bay 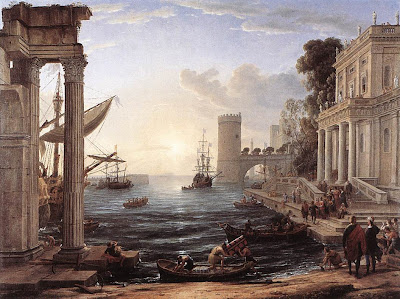 When J.M.W. Turner donated his 1815 painting Dido Building Carthage to the National Gallery in London, he did so under one condition—that it be hung between Claude Lorrain's Seaport with the Embarkation of the Queen of Sheba (above, from 1648) and Landscape with the Marriage of Isaac and Rebecca forever. Claude, born around 1602, remained the paragon of painting for Turner, the model upon which Turner shaped his own art. Claude died on November 23, 1682, but the artistry of his landscapes and seascapes lived on for generations. Looking at Seaport with the Embarkation of the Queen of Sheba as a young man, Turner may have imagined that he was the boy lounging in green in the foreground near the column on the left. The boy protects his eyes from the powerful sun that dominates the painting, but Turner and many other English landscapists of the nineteenth century couldn’t help but look at the way Lorrain painted sunlight as the keynote of such works. Turner rightfully earns the nickname “The Sun King,” but Claude held the title before him for centuries. 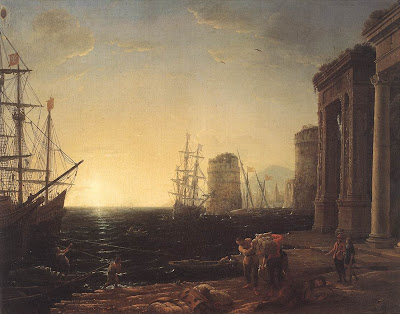 When you look back and forth at the work of Turner and that of Claude, it’s hard not to see the influence of the older artist. John Ruskin praised Turner for his originality, but much of Turner’s “originality” in the early landscapes that Ruskin loved comes directly from Claude. Claude’s Harbour Scene at Sunset (above, from 1643) shows just another single example of how he could unite both land, sea, and sunlight into a harmonious whole. Recognizing the unity of his own work, Claude began drawing copies of every painting he ever did and placed them in a book he called the Liber Veritatis or “Book of Truth.” In truth, the “copies” in the Liber Veritatis weren’t exact copies (see how the copy of Harbour Scene at Sunset differs here), but they maintain the same truthfulness or fidelity to nature’s effects. Turner patterned his own book of copies, the Liber Studiorum or “Book of Studies,” after Claude’s book, but took the additional step of using those copies to create etchings for mass production that spread the word of Turner’s skill around the world. Claude’s book of truth, unfortunately, remained the well-known secret of artists and collectors until the public began to appreciate him more than a century after his death. 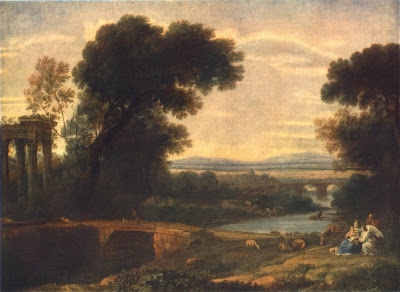 British admiration of Claude wasn’t confined to Turner alone. John Constable called Claude "the most perfect landscape painter the world ever saw." In works such as Claude’s Landscape with the Rest on the Flight into Egypt (above, from 1666), Constable saw a world in which "all is lovely—all amiable—all is amenity and repose; the calm sunshine of the heart." As with the larger landscapes of Claude’s contemporary, Nicolas Poussin, the figures take second place to the real star of the show—the panorama of nature itself. Born into poverty and orphaned by the age of twelve, Claude struggled through years of apprenticeships searching for his place in the world. Clearly, nature itself provided some solace to ease the loneliness. In his art, Claude returns the favor, lavishing great care on his depictions of the natural order—the single rational constant in his ever-changing world. That connection with nature transcended time and place and touched the hearts of Turner, Constable, and others and continues to reach out and touch us today.
Posted by Bob at 12:01 AM