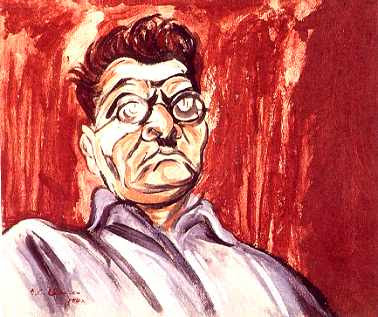 Of the big three of the Golden Age of Mexican Mural Painting—Diego Rivera, David Siqueiros, and Jose Clemente Orozco—Orozco burns with an intensity and singularity of purpose beyond even his intense contemporaries. Born November 23, 1883, Orozco passionately believed in the freedom of the Mexican people but never compromised those ideals in the following of false liberators. As a young man, Orozco lost his right hand and some sight in his right eye in an accident. Taking the surgically removed hand home, Orozco placed it in a container filled with alcohol and set it aflame. Even in his 1940 Self-Portrait (above), Orozco seems to be burning with passion. Perhaps Orozco’s most famous work, the 1939 ceiling mural titled Man of Fire, shows a man literally burning but still walking forward towards his destiny. For Orozco, fire purified by its destructive power, heated the blood to action, and lit the way to a clear path to freedom. 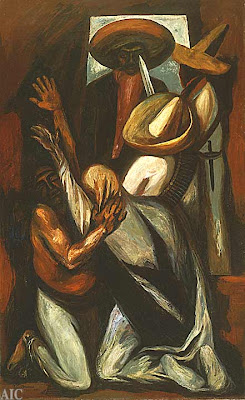 One of the sadder aspects of Rivera and Siqueiros’ lives and art is their continuous falling for false leaders and false hopes that set Mexico back as it strove to move forward. Orozco, however, always viewed potential saviors with a cynical eye. In the painting Zapata (above, from 1930), Orozco shows Emiliano Zapata, leader of the Mexican Revolution. Rather than place Zapata front and center as the central hero, Orozco pushes Zapata to the back of the picture. Peasants and soldiers dominate the front of the image, just as the conflict between the ruthless enemy army and the defenseless Mexican poor caught up in the conflict dominated Orozco’s mind more than the capering of a self-proclaimed hero. The dagger aimed at Zapata’s eye foreshadows his bloody end in which he who lived by the sword, died by it. There’s a great similarity between Orozco’s style and that of the German Expressionists, especially Ernst Ludwig Kirchner. Both artists searched for ways to express the harsh realities around them in a simple, arresting style that all levels of society could rally around. 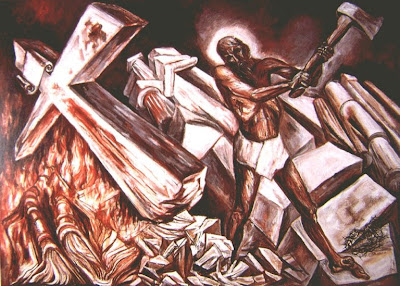 When Orozco painted murals for the National Preparatory School in Mexico City in the early 1920s, one of the most controversial was his Christ Destroying his Cross (above, a different version from 1943). Orozco returned to this theme over and over, including a version in his largest work, the 24-panel, 3,200-square-foot-long series of murals known as The Epic of American Civilization at Dartmouth University. Instead of painting the meek, suffering servant version of Christ, Orozco paints an axe-wielding Jesus chopping down the cross as a symbol of all forms of authoritarian oppression throughout history. Meek acceptance of anything just wasn’t something Orozco could do, and he could never envision a savior who was less of a warrior than he was. It’s amazing to think that Orozco accomplished such tremendous physical feats of art with a single hand and diminished eyesight, but the fires that burned inside his soul fueled a mighty engine that refused to quit as long as someone, somewhere did not enjoy the light of freedom.
Posted by Bob at 12:01 AM

i have gone through this blog. nowadays im working from my home as a online businessman. and the above blog is really helpful.