A Celebration of Life 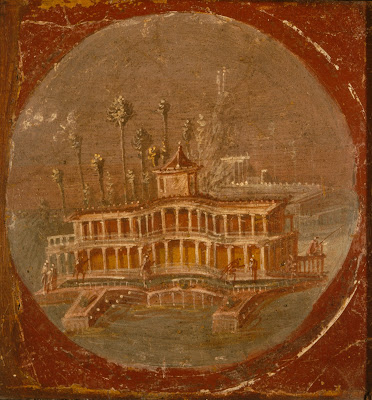 When the Roman senate recessed each spring, the elite members of society left the worries of the city behind for the pleasures of the countryside, specifically the land surrounding the Bay of Naples where they had built their sumptuous villas (above). “Wearied by the crowds and hectic pace of Roman life, they pined for greater leisure and the chance it gave to contemplate the finer things in life,” Sir Derek Jacobi narrates in Pompeii and the Roman Villa: Art and Culture around the Bay of Naples, the video accompaniment to the exhibition of the same name at the National Gallery of Art in Washington, DC. Distributed by Microcinema, Pompeii and the Roman Villa visually recreates the playground of ancient Rome, where the Caesars and other wealthy members of Roman society indulged in the higher pursuits of life such as art. Surrounded by good fishing and good crops, including wine grapes grown in the rich soil near Vesuvius, Romans feasted upon the local bounty. The same geothermic activity that fueled Vesuvius heated the local baths where the elite eased their cares away. Satisfied in so many other ways, Roman citizens turned to the arts and set up a system of patronage unmatched in history that survives today mainly through the great tragedy of 79 AD. 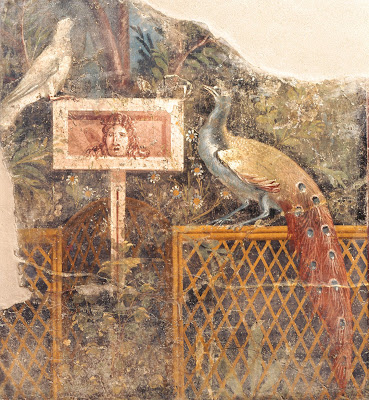 Buried beneath volcanic debris for millennia, the frescoes of Pompeii and the region startle us with their vibrancy in terms of color and subject matter. The “playful and luxurious” style appears in works such as the fresco known as Peacock on a Garden Fence (above), which emulates the natural beauty of the region while capturing it for the indoor edification of the patron. Such frescoes allowed Romans to bring the pleasures of the garden inside while dining, unifying their home along the lines of pleasure and good taste. A cottage industry of artists developed around the region to meet the demand for such decoration. Pompeii soon became a flourishing artistic center of the empire, devising advances in painting, sculpture, glassware, and other arts to meet the ever growing market for beautiful things. Thanks to computer simulations and footage of restored ruins on site, Pompeii and the Roman Villa allows you to imagine in your mind’s eye what the region once may have been like. Amidst the brutality and warfare of empire, the villas of the Bay of Naples provided an oasis of art and refinement. 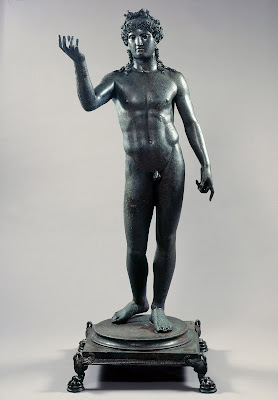 Much of this art fed the Roman mania for all things Greek. The Lamp-Bearing Youth of the House of Fabius Rufus (above) most likely is a reimagining of Apollo, the Greek god of light, as a decorative light source for the home. “Knowledge of Greek culture was a status symbol,” Jacobi intones, and anyone who was anyone filled their home with Greek style, from allusions to Greek myths in sculptures and frescoes to copies of Greek artistic motifs such as the Three Graces. When Pompeii itself became a congested, dirty city to rival Rome, such Greek-isms helped homeowners escape the toil and trials outside their walls. Courtyards in which Hercules and other Greek gods served as garden ornaments sat far within the home, insulated from the raucous streets. I remember when visiting Pompeii years ago being surprised at just how close to residential areas merchants would conduct their business. When the initial escape plan for Romans failed as urbanization pursued them, Romans learned to escape not physically but philosophically from the world. 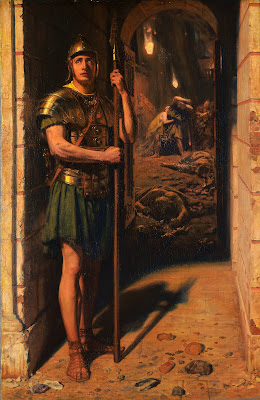 “There have been many disasters in the world,” Goethe once wrote of Pompeii, “but few have given so much pleasure to posterity.” The second half of Pompeii and the Roman Villa recounts the second life of these treasures after the rediscovery and excavation of Pompeii during the 18th century. Sir Edward John Poynter’s 1865 painting, Faithful unto Death (above), showing a Roman guard remaining at his post as Vesuvius erupted, is just one example of the art inspired by the events of Pompeii and the art discovered in the ruins. Footage from the many filmed retellings of the story of Pompeii, starting in the silent film days, amuses us today. I found more stunning footage from 1944 of Allied troops, still weary from liberating Italy, anxiously staring at Vesuvius in the midst of “minor” volcanic activity. The video wonderfully connects the glory that was Pompeii with the neoclassical style of 18th and 19th century Europe as well as with such modern power spaces as the Grand Pavilion of Buckingham Palace and the Appropriations Conference Room of the United States Senate. 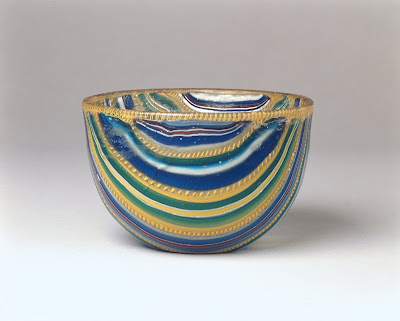 Perhaps the most refreshing aspect of Pompeii and the Roman Villa is how it concentrates on celebrating the art of the region without dwelling too long on the tragedy that preserved it for us to enjoy. Derek Jacobi’s narration (100% I, Claudius stutter-free) adds the perfect light-hearted touch for us to look at such works as the beautiful Vesuvian bowl (above) that comes down to us in all its wonderful color despite its fragility. Pompeii and the Roman Villa maintains a fragile balance between fun and funereal and allows us to see past the death to the life these people once lived so colorfully.

[Many thanks to Microcinema for providing me with a review copy of the video Pompeii and the Roman Villa: Art and Culture around the Bay of Naples and to the National Gallery of Art in Washington, DC, for providing me with the images above from their exhibition of the same name.]
Posted by Bob at 12:01 AM